Chicago teachers vs. Rahm: Round two

Chicago Mayor Rahm Emanuel is demanding cutbacks and concessions, but teachers are pushing back amid a wider attack on public-sector unions. Lee Sustar reports.

CHICAGO TEACHERS Union (CTU) delegates struck a defiant tone at their meeting May 6 when union leaders announced that negotiators for the Chicago Public Schools (CPS) were out to cut their pay by 7 percent by forcing them to pay more in pension contributions.

The second contract negotiated with Emanuel--three years after the nine-day CTU strike forced the arrogant national powerbroker into a humiliating setback--is not only turning into another high-stakes showdown, but is part of a wider battle over public employees' retirement pay across the state of Illinois.

After the conclusion of the union's House of Delegates meeting on May 6, CTU President Karen Lewis told reporters that the offer by CPS negotiators was "insulting," "retaliatory" and "reactionary."

The union plans to hold a big June 9 rally for a good contract as it presses CPS to begin bargaining in good faith. The CTU filed an unfair labor practice (ULP) charge against CPS after school board negotiators, rather than bargaining about the issue directly, simply inserted an electronic comment in the union's contract proposals, stating that the board would no longer pick up 7 percent of contributions toward pensions. 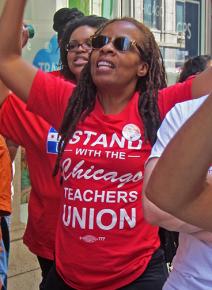 This move by CPS reverses a position taken 34 years ago when the board claimed it couldn't afford a traditional pay raise. Now, citing a $600 million payment that the board is legally required to make into the union's pension fund, CPS is demanding concessions that amount to a major pay cut.

At the same time, CPS refuses to budge on CTU's demands to improve conditions for both teachers and students, including a library in every school; vermin removal and air quality control; restorative justice coordinators to replace harsh disciplinary measures; expansion of extracurricular activities; a shift from expensive Teach for America placement programs to "grow your own" trainings that allow school clerks and aides to become teachers; and strengthened rights for laid-off members.

AS IT did during the 2012 strike that bested Emanuel, the CTU is attempting to win over the public to support its demands. According to a 2014 Chicago Tribune opinion poll, the union is seen as more authoritative on public education issues than CPS.

And now, school officials' credibility has been further shaken by an ongoing federal investigation of a no-bid contract to a training firm that once employed schools CEO Barbara Byrd-Bennett.

The investigation has touched the Chicago Public Education Fund, dominated by investment bankers who dole out grant money to push corporate education reform. "It would be difficult to assemble a board that screams 1 Percent louder than CPEF's," notes Chicago journalist Carol Felsenthal.

The emerging scandal will almost certainly cost Byrd-Bennett her job--although she continues to be paid her $250,000 annual salary while on leave to deal with the investigation. The interim schools CEO Jesse Ruiz isn't likely to stay long, either: A high-powered lawyer and CPS board member who once chaired the state of board of education, Ruiz is on track for a big business career or high elected office, and won't want the CPS mess to stick to him.

The turmoil at the top of CPS opens the way for the CTU to push its message to union members and the public--that the school board is "broke on purpose," as the union puts it.

School board members--who are handpicked by Emanuel--refuse to renegotiate high-interest financing that costs CPS tens of millions of dollars per year. The CTU had been pointing this out since 2010--and last November, a Chicago Tribune series found that the deal, pushed by school board president David Vitale, may ultimately cost CPS $100 million.

The CTU points to several other examples of wasteful spending, such as $64 million contract to the firm Aramark for custodial services--a deal that went $22 million over budget even as schools were left filthy under Aramark. Another $80 million custodial contract went to a company controlled by former NBA star Earvin Magic Johnson--who donated $250,000 to Rahm Emanuel's reelection campaign.

Then there's the privatization of public education through charter schools. After closing a record 49 schools in one fell swoop in spring 2013, CPS cut funding for traditional schools in the 2014-2015 school year by $72 million, while boosting spending on privately operated charter and contract schools by 12 percent, to a total of $11 million.

MAYOR EMANUEL will counterattack the CTU on several fronts.

In claiming that there's simply no money for a good teachers' contract, he'll point to Jesus "Chuy" Garcia's unsuccessful effort to oust him in the mayoral election runoff in April. On the campaign trail, Garcia--who became Emanuel's main challenger largely because of the endorsement and support of Karen Lewis and the CTU--repeatedly stated that if elected, he would seek cuts from unions, just like Emanuel has. Thus, Emanuel can claim that even the CTU's own candidate favored contract concessions by the CTU.

Garcia's austerity-is-inevitable campaign may burden the CTU leadership as it seeks to mobilize support from its members, parents and the community. Emanuel's re-election wasn't the result not of his popularity--turnout was just 40 percent. But there was a glum acceptance that the city must choose a "crisis manager," as a Chicago Tribune editorial put it.

To escape that political vise, the CTU is challenging the logic of the austerity agenda itself. But to win public support, the union will have to take up a wider argument over who must pay in the drive for austerity demanded by both Emanuel and Illinois' new Republican Gov. Bruce Rauner, the billionaire hedge fund manager who bought himself an election last November.

Rauner wants to slash $4 billion from the Illinois budget--including a $1.5 billion reduction in Medicaid and crippling cuts to program for young adults in needs and children who require early intervention.

But pensions are Rauner's number one issue. After years of failing to meets its obligation to pay in to workers' pensions, the funds face a $111 billion shortfall, the worst in the U.S. However, after the Illinois Supreme Court sided with organized labor May 8 overturning pension-cutting legislation as unconstitutional, Rauner and Emanuel--old friends and business associates--are looking for other ways to radically reduce public employees' retirement benefits.

THE SCALE of the pension crisis for CPS and the state as a whole has brought some unpredictability into the bargaining process for the CTU and other public-sector employers.

Rauner, who's seeking local "right-to-work" zones to curb union power in towns and cities around Illinois, has also floated the idea of bankruptcy for CPS as a way to radically reduce pension obligations and tear up labor contracts.

Emanuel has rejected such proposals. "As long as I'm mayor, Chicago will not be a right-to-work city," the mayor told reporters.

Nevertheless, the scale of the crisis could lead to extraordinary measures, such as the imposition of state financial control of CPS, which took place in the late 1970s and early 1980s as a way for bankers and wealthy bondholders to ensure that they could continue to squeeze money out of the school system. The Civic Federation, a corporate-run pro-austerity group, is pushing for a similar measure today.

Rauner may back such a measure for CPS. Emanuel would respond by posing as the protector of the city's schools--a good cop-bad cop routine that the governor and the mayor have already staked out in the media. Emanuel would prefer to keep direct control of CPS. But he will also seek austerity--probably less harsh than that sought by the governor, but austerity nonetheless.

At the same time, Rauner will continue to test his executive powers in the courts. He's already refusing to deduct union agency fees--the money paid by nonunion employees to cover the unions' cost of collective bargaining--from state employees' paychecks, and he wants the same thing from teachers.

The governor has already demanded deep concessions from the state's biggest union, the American Federation of State, County and Municipal Employees (AFSCME), and may move to impose a contract once the current agreement expires this year. This would be intended to provoke a strike--one in which the governor would be out to crush all resistance.

The CTU, meanwhile, will be mobilizing its members for what already seems to be an inevitable second strike against Emanuel. This time, Emanuel and CPS negotiators will use every tool they have under a law known as SB7, which mandates a detailed negotiation process and fact-finding procedure that CPS can stretch out--as well as the requirement for 75 percent of CTU members to vote to authorize a strike before it can be legal.

As they face their biggest challenge in decades, the CTU and other public-sector unions won't be able to count on liberal Democrats for help. It was Gov. Pat Quinn, a labor-backed Democrat, who teamed up with the Democratic-controlled legislature to push the unconstitutional pension cuts in the first place.

And Illinois House Speaker Mike Madigan, while maneuvering against Rauner by scheduling a vote to reject the governor's budget, won't be labor's ally. The demand to resolve Illinois pension crisis comes from bondholders on Wall Street and Chicago's LaSalle Street, the center of the financial district. Madigan's priority is to appease those interests, even if he's attempting to deflect political blame onto Rauner.

The challenge now is for the CTU to galvanize an alliance of unions, community organizations and activists that not only supports the unions against demands for concessions, but rallies wider working class opposition to the Rauner-Emanuel austerity agenda.