The “red lines” of the Greek people

Greece's future is at stake in discussions at the European Union (EU) summit in Riga, Latvia on May 21-22. The left-wing government led by SYRIZA will soon have to choose between repayments on Greece's international debts and paying public-sector wages and pensions after the policy of economic strangulation pursued by EU political and financial officials.

In February, Prime Minister Alexis Tsipras agreed to a wholesale retreat from SYRIZA's election promises to reverse austerity with an agreement with the Eurogroup finance ministers to extend the bailout of Greece's financial system in return for continuing drastic austerity measures contained in the so-called Memorandums signed by previous governments. But EU leaders have refused to accept the government's proposals and release further bailout funds. Meanwhile, within SYRIZA, there is an ongoing debate over the concessions that the Tsipras government has already made and what to do when the moment of truth arrives.

In this statement issued May 15, SYRIZA's Political Secretariat--a smaller leadership body elected by the Central Committee--reaffirmed the party's commitment to challenging the extortion of the lenders and called on working people in Greece and around Europe to mobilize in defense of democracy and solidarity.

FROM THE moment that the government was established, it has been clear, both abroad and within the country, that the mandate of the Greek people for SYRIZA is binding and represents the compass to guide the government in negotiations.

The "red lines" of the government are also red lines of the Greek people--they express the interests of workers, pensioners, farmers and youth. They express the need of the country to follow a new path of growth, with social justice and the redistribution of wealth at its core.

The determination of the lenders to apply the Memorandum program of the Samaras government, placing Greece in a stranglehold of political pressure and financial suffocation, is in direct conflict with the principles of democracy and popular sovereignty in Europe. The obsessive commitment to austerity degrades the welfare state and furthers the oligarchic direction of European affairs, where decisions are made in closed rooms, unaffected by the popular will, paving the way for the rise of the extreme right in Europe. 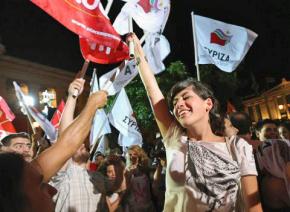 The citizens of Greece and Europe are not passive subjects who must follow events on the news. Instead, we believe that they can be participants in a negotiation that concerns the common fate of all of us across Europe and the world.

SYRIZA will take any necessary initiative to inform Greek society and the peoples of Europe. In every city, every neighborhood and workplace, but also in all countries of Europe, the MPs, Euro MPs and cadres of SYRIZA will gather together with members of SYRIZA and solidarity forces to call for a broad mobilization for the victory of democracy and dignity.

Now is the time get the people themselves involved in the struggle.