Life has no dignity at Quad

A worker describes conditions at a plant where a co-worker was crushed to death.

A WORKER was killed on the shop floor at the Oklahoma City Quad/Graphics printing plant on April 24. His death came as a shock and horror to his co-workers. While servicing equipment on a maintenance call, he was crushed to death under a crane. Quad/Graphics decided not to shut down, and workers were sent back to the presses.

Quad/Graphics, based in Sussex, Wisconsin, was founded in 1971 by Harry V. Quadracci. Previously, Quadracci was an executive at the print company W.A. Krueger. Following a protracted strike in 1969, Harry resigned to start his own, anti-union print company named Quad/Graphics after himself. Quad is the fastest-growing print company in the U.S. It is second overall, but first in various categories, such as magazine production. It has a presence throughout the world, with plants in Mexico, Argentina, Chile and other Latin American countries, as well as Poland and India.

Quad is infamous among labor activists for its sweatshop conditions, vicious anti-union policies--like Walmart, management has been known to shut down a location if a union push is successful--and the lowest pay in the industry, averaging about two-thirds of what competitors pay. Quad is also a big financial backer of Wisconsin Gov. Scott Walker and of the misnamed "right-to-work" laws in various states. 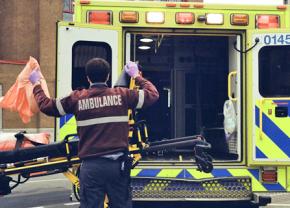 Quad selected Oklahoma for a plant because it's an ideal location for shipping and distribution. Located in the middle of the country and with major interstate arteries like I-40 heading east and west and I-35 heading north and south, the Oklahoma City plant can ship anywhere. It is the single largest print facility west of the Mississippi River, at nearly 1.5 million square feet. It houses nine web offset presses, six gravure presses and a huge finishing department. The Oklahoma City facility is Quad's premier magazine and catalogue plant, printing titles like Time, Sports Illustrated, People, US Weekly and more.

LABOR CONDITIONS at the plant are horrible. Employees work 12-hour shifts without breaks or even a sit-down lunch. You are generally expected to eat while you work, if you have time at all. It is common for workers to skip meals if the shift is especially busy. The base pay is horribly low, so most workers expect to do at least some overtime if they wish to survive. Working more than 60 hours a week is routine, and 84 is also common. Various levels of exhaustion among workers are also normal. Quad is kind enough to stock their vending machines with overpriced energy drinks.

Crewing levels are kept as low as possible, so very often, workers have to handle multiple tasks at once. The company has a preference for hiring vulnerable and desperate workers, such as those with felony convictions. While people with records certainly need the work to piece their lives back together, Quad management hires them mostly for the tax advantages and because a desperate workforce is theoretically less likely to fight back against abuses. The turnover rate is extremely high, with more then half of new hires not surviving the first week.

Quad practices a policy known sarcastically among workers as "promotion without pay." Due to the very high turnover rate, management rapidly promotes out of sheer necessity anyone who sticks around and tries, but does so without pay increases for as long as possible. At a traditional--and generally unionized--print plant, the turnover rate is much lower, and it can take years to move up to the next position. It can take several years to move from material handler, which is the entry-level position on press, to roll tender, but at Quad, it can happen as quickly as 30 days.

It's not uncommon for people to move from new hire to second pressman in less then a year--all without any pay increase. Management will tell their workforce to take a variety of utterly useless classes before any pay increases can occur. Even then, it's very rare to get the full pay grade reflecting the current position held.

Various labor, safety and environmental laws are routinely ignored at Quad. Workers are told to dispose of chemicals down the sink drain (something the Environmental Protection Agency bans). When working with paper and flammable chemicals, fires are a common occurrence. Occasionally, the air scrubbers used to maintain air quality (per the Clean Air Act) will malfunction, and polluted air is pumped into the building, forcing workers to breathe the air while they continue to work so that the press doesn't shut down. During those times, the air is thick and hazy around the press.

Injuries are common, and though mostly minor, they can occasionally be catastrophic. Several years ago, a worker lost an entire arm. Losing fingertips is more common. New hires are told at orientation that they will get two 20-minute breaks per shift and a 20-minute sit-down lunch. No one on press actually gets a break. The more class-conscious workers will often bend this rule and, if time allows, help give each other breaks in an act of solidarity, but management frowns on this practice.

The attendance policy is very strict. Calling in on an overtime day counts as two occurrences, so if an emergency happens, and you end up calling in several times in a row, you may be without a job. People very often show up to work sick out of fear of losing their jobs.

The mood on the shop floor is dark and pessimistic. Morale is horribly low. Anger toward conditions sometimes boils over in a variety of ways. In at least two recent incidents, recently laid-off workers came back to the plant with weapons and threatened management.

After this, police cars could be seen in the parking lot at shift change, with uniformed officers roaming the halls, watching the workforce. There are more locks on more doors, and cameras have been installed everywhere. Management fears its workforce, but is unwilling to improve conditions. A constant state of class war is evident everywhere.

Equipment is often badly maintained. The mechanics and electricians in the maintenance department want to fix equipment, but far too often, their hands are tied. Parts are never ordered, and instead, things are repaired as much as possible with whatever is on hand. Sometimes, vital parts of presses will operate in a suboptimal, if not an outright broken state for many months on end.

ON APRIL 24, an experienced veteran electrician was called out to the gravure press department on a maintenance call. During the service call, an incident occurred in which he was crushed to death under a crane. It's not fully clear if it was a malfunction or a freak accident. No press in offset was shut down, nor was the plant ever shut down. Workers continued to work as a comrade and co-worker lay dying.

Lawyers and insurance agents were in the plant before his family was even notified of the incident. Before the Occupational Safety and Health Administration could come in, workers were told to clean up, properly label chemicals and to make the plant appear safer then it actually is. Within a few days of the worker's death, the affected press was operational again. Production continued even while his blood dried. The outrage is palpable, but for now people are keeping silent out of fear.

Conditions at Quad are unbearable on a good day. Now that a worker has died, it is plain for all to see just how little employees matter to the company as individuals. Life has no dignity at Quad. Anger at times reaches a boiling point. Even senior skilled workers are known to walk out mid-shift out of sheer frustration at the conditions.

The anger is evident, but a deep fear is even stronger. Quad is infamous for its scorched-earth policy toward unions. So what do we do? Solidarity is evident and everywhere--workers supporting other workers, giving each other de facto breaks, and supporting one another in a variety of inspiring ways. What is evident is that this situation cannot continue. Life has dignity, and this method of production of profits before all other considerations must cease. The working class creates society; we should run it.