No new Memorandum in our name!

Greece's parliament is being asked to vote on a third Memorandum--a package of austerity measure to be implemented in exchange for financial assistance from European governments and international "institutions," like those negotiated by previous governments. Prime Minister Alexis Tsipras is pressing for the most drastic austerity measures yet, in direct opposition to the commitments and program of his own party SYRIZA, which won election last January with its promise to overturn the Memorandums.

Tsipras' call for Greek lawmakers to capitulate comes 10 days after a July 5 referendum on the latest proposals for austerity from European Commission President Jean-Claude Juncker--which were met with an overwhelming "no" ("oxi" in Greek) by workers and the poor in Greece. But now, the government that supported a "no" vote in the referendum is asking for a "yes" on austerity measures that are worse in many ways.

But opposition to this surrender to blackmail is building, with a 24-hour strike called by Greece's public-sector union federation and an uprising of the left within SYRIZA. Here we reprint the text of a leaflet, translated by Leandros Fischer, that the Red Network--an alliance of socialists who are a leading voice in SYRIZA's Left Platform--will distribute during demonstrations on July 15, as the parliament meets to vote on Tsipras' proposals.

JUST ONE week after the July 5 referendum's massive "Oxi!" vote, the governmental leadership and Alexis Tsipras have returned from negotiations in Brussels, having agreed to a gigantic Memorandum, socially and fiscally harsher than the two previous ones, and with a much stronger colonial character.

This Memorandum threatens to crush the social majority that lives from its work and has suffered in the five years of extreme austerity policies under the previous two Memorandums, which have eliminated what remains of its gains over many years.

With its unprecedented colonial clauses, this Memorandum completes the disastrous task of transforming Greece into a debt colony within the EU. It dishonors the left, since it was agreed to in its name, and by the leadership of a party of the left and a government dominated by this party, which won governmental power based exactly on its historical commitment to abolishing the Memoranda and overthrowing austerity. 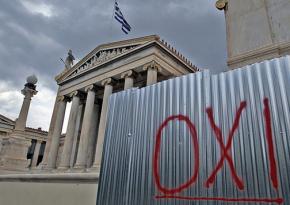 This new Memorandum essentially and practically overthrows the government led by SYRIZA: programmatically, but also politically, since it transforms SYRIZA into an austerity government with an increasingly pro-austerity composition (more so after the removal of left-wing cabinet ministers and the potential openings to the austerity camp).

It will have a destructive effect on SYRIZA itself, by blackmailing it to become an apologist for the implementation of austerity policies; to sever its ties to the working-class majority and move against it; to transform itself into a social-liberal party of austerity and authoritarianism.

The new Memorandum strikes a double blow at the left's system of core values and its moral high ground, by cheating the people who believed its longstanding promise to abolish the Memoranda and topple austerity, but also all the people who contributed to the referendum's shattering "Oxi!" vote.

It whitewashes the austerity system and the pro-austerity parties by giving them the chance to claim that SYRIZA and the left have delivered a Memorandum worse than their own. It hinders us in the fight against local and international capitalism, making them look all-powerful and capable of crushing and humiliating a left-wing government.

FOR ALL these reasons, the new Memorandum poses the serious danger of massive disillusionment among the left and the social movements, while also creating a danger that popular discontent will be exploited by the right, the far right and the fascists.

Yet if all these are dangers arising from this agreement, if its first consequences are already visible, nevertheless, the struggle for its overthrow is not in vain. On the contrary, the potential for blocking and overthrowing the new Memorandum, but also lifting the banner of the left, which some, criminally, want to tread upon, are great!

The people of "Oxi!"--this massive popular force, this class-based alliance of workers, the poor and the youth that surfaced in the battle over the referendum--continues to exist. It proves to us that the will to struggle, as well as the anger at their conditions, not only haven't subsided, but are accumulating at the base of society. The baton of the battle against the new Memorandum can be handed on to new hands! That means the struggle will continue with the same goal as always: abolishing the Memorandums and overthrowing austerity.

And SYRIZA, too--the left-wing SYRIZA, with its radical soul--continues to exist. The government and party moderates rightly consider it to be an obstacle in managing and implementing the new Memorandum, and threaten it with disciplinary measures and expulsions. They call for it to be disciplined to party decisions.

But what counts for the left, above all, is discipline to its program and its political strategy--including abolishing the Memorandums, overthrowing austerity, renouncing the debt and the implementing the basic measures articulated in SYRIZA's Thessaloniki program--discipline to the inviolable principles and values of the left; and discipline to the collective decisions made to realize both of these.

For SYRIZA, this means discipline to the program of its founding congress, to its pre-election commitments, to the Thessaloniki Program, to the popular mandate of the January 25 elections, and to the mandate of the "Oxi!" vote on July 5.

We are the SYRIZA that abides by all this and that calls for discipline from those who dare to trample on the double popular mandate, and the principles, values and collective decisions of SYRIZA. For the left, discipline does not mean discipline to the arbitrary decisions of the "leader" and the tight circle around him!

Now is the time for this SYRIZA to enter the battle and prevent the disastrous decision to sign a new Memorandum agreement.

Last, but not least in importance, there is also the left beyond SYRIZA of the social movements and the "Oxi!" vote. Whatever the mistakes made and disagreements we have had, we found ourselves in the streets and in struggles in recent years, and we won the battle of the July 5 referendum. In this new cycle of social and political struggles, we must and can stand side by side!

This battle of ours is, at the same time, a battle against demoralization and disappointment--for a new commitment to our part in the mass struggle. Not by way of moralizing and not because it is our "duty," but on the basis of both reason and imagination, based on the realistic assumption that we can win!

Together, the people of "Oxi!" and the party of "Oxi!" which is SYRIZA--the forces of SYRIZA, but also the forces of the rest of the left, for whom "no" means no and cannot become maybe or, even worse, "yes"--can enter this battle, and win as well!