What “we” knew about the Nazis

Supporters of the British monarchy are furious about photos showing the 7-year-old future Queen of England giving the Nazi salute in the early 1930s, apparently under the instruction of her uncle, Edward VIII. But there was another adult in the picture, points out Michael Rosen, in an article for the revolutionary socialism in the 21st century website.

THE real problem posed by the photos of the future queen sieg-heiling is not whether she was too young to know what she was doing, but why her mother, Elizabeth Bowes-Lyon, was doing it, too. I've noticed on Twitter, and indeed in the discussion on Newsnight, that the default defense of all this is that 1933-34, when the photos were taken, was "too early" for Brits to know what was going on in Germany. After all, the argument goes, this is long before the awful truth of the Holocaust became known. True.

So really the question to ask--and it's a question that seems to have been far too hard for the backroom staff at Newsnight to have figured out--is how were the Nazis going down amongst the public in 1933/34?

First, to put some important matters on the map: By the middle of 1933, the Nazis had abolished democracy with the Enabling Acts and the Reichstag Decrees; they had set about the immediate, pressing task of beheading the labor movement by imprisoning or killing trade unionists, socialists and communists. The concentration camp Dachau was used to imprison opponents (or people deemed to be opponents), and immediately, thousands of working-class militants were put into hard labor gangs. 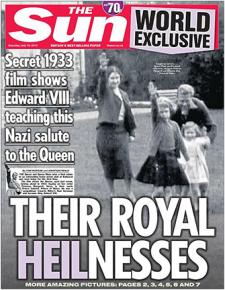 In Britain, in 1932, Oswald Mosley founded the British Union of Fascists based on fascist parties across Europe and was given great coverage in the British press for his ideas, even as his thugs started terrorizing Jews in the East End of London and starting up provocations in the West End, where there was a strong Jewish presence in the "shmatte" (rag) trade. From a purely personal point of view, this is where some of what has been said about the Royals' sieg-heiling is so offensive. Whenever mainstream journalists and commentators talk about racism, they very frequently lapse into a commentary that is itself racist in the use of the very word "people." So we are often told that "people" were racist or "people" were anti-Semitic. This is both offensive to those people who aren't or weren't racist, but also leaves out of the category "people" the very people on the receiving end of the racism or anti-Semitism! So in the trope that "people" didn't know about the Nazis' anti-Semitism, the fact that Jews did know about it is left out! The papers of the Jewish establishment were quite vocal and explicit about the Nazis' anti-Semitism, but this awareness is left out of the picture in the rush to explain away the Royals' salutes.

THE FULL coverage of one Adolf Hitler is only a Google click away on the British Newspaper Archive site, where you can get quickly get a sense of how much news from Germany was getting through to British readers from 1928-33. On Newsnight, we had to put up with insulting waffle about how people didn't have TV and the Internet then, so they didn't know what fascism was about. Newspapers like the Daily Mirror (very briefly sympathetic to Mosley's fascists), the People, the Daily Herald and Reynolds News (left Sunday) all had a left-leaning, Labour-supporting approach to this, alongside some of the popular local and local evening papers. Of course, the Daily Worker had followed the rise and rise of the Nazis very closely, and had reported on them, albeit with the winding, twisting track of both identifying the menace as well as carrying Moscow's position on the "social fascism" of the German social democrats.

Meanwhile, the Times decided to serialize Mein Kampf in July 1933, so again, what the Nazis stood for was hardly a secret, hardly unknown! Indeed, the moment Hitler took on the full power of the German state in January 1933, boycotts of German goods began to be organized by Jewish organizations in the U.S.--also widely reported around the world. Again, it was no secret as to why this happened.

In truth, the full picture of British attitudes to the Nazis between 1928 and 1933 is that plenty of powerful people thought that Hitler was right precisely because he was out to kill off the left and precisely because he promised that he would persecute the Jews. The word "appease" is utterly inadequate to describe this. It was an explicit sympathy and support. Sadly, the word "appeasement" has ended up confusing the matter as if this were a matter of weak kow-towing to Nazism or even a form of honestly meant--even pacifist--realpolitik. This, of course, exonerates and explains away a body of conservative (and Conservative) opinion that thought that clobbering Jews, trade unionists, socialists, communists and anarchists was absolutely right.

I suspect we will never be told exactly how integrated with this body of opinion Elizabeth Bowes-Lyon was. She has the status of demigod in the ranks of those who want us to admire monarchism. In the meantime, we have to put up with swathes of mealy-mouthed crap about how "we" didn't know about Nazism, "we" didn't know about the Nazis' abolition of democracy, persecution and pogroms against the working-class leaders and "we" didn't know what Hitler wrote in Mein Kampf. Well, actually "we" did.