Independent journalist and filmmaker Jeremy Scahill has reported from Afghanistan, Iraq, Somalia, Yemen, Nigeria and the former Yugoslavia—and from the devastated Gulf Coast after Hurricane Katrina struck, and New Orleans was deluged. In New Orleans following the Katrina disaster, he encountered the gunmen of the notorious security firm Blackwater USA, whose mercenaries were used by the Pentagon in Iraq.

Today, Scahill is a founding editor of The Intercept, the journalist behind the Academy Award-nominated movie Dirty Wars, and author of several books, including Blackwater: The Rise of the World's Most Powerful Mercenary Army and Dirty Wars: The World Is a Battlefield. In an interview for the September 30, 2005, issue of Socialist Worker, he talked to Alan Maass about Blackwater and the struggle over the rebuilding of New Orleans.

YOU FOUND Blackwater USA security personnel on duty in New Orleans. Can you talk about what they were doing there, and the significance of their presence?

BLACKWATER USA has been forced to respond to the reporting that I've done, and to admit that it's on a federal contract with the Department of Homeland Security. It's a $400,000 contract--to guard FEMA reconstruction sites, according to them.

And they've also been forced to admit that the Louisiana state government provided them with a letter authorizing them to carry their loaded weapons around the city. I had reported that one of them showed me a Louisiana state law enforcement badge and said that he'd been deputized by the governor.

Blackwater has said that they now want to set the record straight. But their men on the ground told a very different story. They talked of confronting criminals and stopping looters. That's what's called vigilantism. They are not allowed to be patrolling the streets.

They are essentially roaming the streets heavily armed, and there have been deadly incidents between private security forces and people in New Orleans. 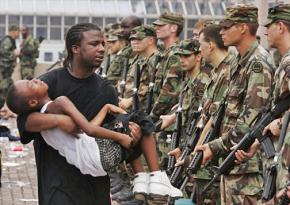 What I think is really important for people is to view this through the bigger lens of decades of U.S. foreign policy, where you have the hidden hand of the corporate "free" market, and then you have the iron fist of militarism. That's what we're seeing here and now in the United States, in one of the Blackest cities in this country.

You're seeing the same corporate profiteers that operate in Iraq, now descending on a U.S. community. The aim of this is that the wealthy elite--the business leaders, the corporations, the government officials--are conspiring to essentially change the demographics of New Orleans. They speak openly of this. And they're bringing in these paramilitary thugs to defend the operation.

WHATEVER BLOW the Bush administration may have suffered in terms of public opinion, it's been quick to respond to the opportunity to push through items on its right-wing agenda--like scrapping the Posse Comitatus Act that prohibits the military from operating in the U.S. as law enforcement.

PRESIDENT BUSH is using this to try to wipe out Posse Comitatus, and he's also used it to wipe out the Davis-Bacon Act [requiring government contractors to pay the prevailing wage].

You have a situation where shelters are teeming with people who want work, and you have corporate barons busing in Mexican workers from Texas to do the dirty work. The reason they're busing in people from another state to do this work is because, number one, they can pay them less, but number two, they don't want people to have jobs in Louisiana.

They don't want people to re-establish their lives in New Orleans. They want to move them elsewhere--they want to ship them off. That's why you see all these right-wing church groups coming in with their buses and trying to convince people to go to Nebraska or to Utah or to Wisconsin--instead of rebuilding in the community.

We know now, because of the reporting of Naomi Klein and a handful of others, that there's a Republican study group which has been looking at ways to push through all of the prized policy goals of the far right of the Republican Party--things like drilling in [the Arctic National Wildlife Refuge in Alaska], things like offshore drilling, things like school vouchers.

All of these are part of their agenda. They're viewing New Orleans as a sort of a grand experiment, so that out of the rubble of this disaster, we're seeing emerge a new model for disaster profiteering.

MEANWHILE, POLITICALLY connected businesses are discovering ways to line their pockets out of this, aren't they?

I THINK it's interesting that Dick Cheney was named the "czar" to deal with this disaster. That's hardly the most comforting face that victims can see--which is why he was told twice to fuck off by a very angry individual when they saw him come into their community in Mississippi.

But the first place that Cheney went was to Gulfport, Mississippi, and Halliburton had just activated its contract with the Navy--a very lucrative contract--to begin the reconstruction of naval facilities in Gulfport. Halliburton is also getting a contract to service the Department of Homeland Security camps that are being set up.

At the same time, you have Bechtel getting contracts, and you have close friends of the president getting contracts. Joe Allbaugh is the top lobbyist for [the Halliburton subsidiary] Kellogg, Brown & Root. He beat the federal government down there to begin scooping up these contracts.

So you see the same individuals and companies profiteering in Iraq who are now setting their sites on the disaster zone in the south of this country.

HAS THERE been a development of anger and resistance to all this?

YOU'RE DEFINITELY seeing a popular rage growing among the displaced of New Orleans.

But I also think that those people who are the mobilizers and organizers also had to face the decimation of their homes and communities. So I think there's a real crisis right now--that the very forces that could mobilize and organize themselves had to run for their lives and take care of their families.

These business leaders are swooping in. It's on already--they have their plan for the reconstruction of New Orleans, and it's not a people's plan for reconstruction.

So the reality is that those people who made their lives in New Orleans, if they want to remain there, are going to have to fight. They're going to have no choice. And what they're going to be facing down as they engage in that fight are the same paramilitaries that are killing people in Iraq.

These are policies that are going to backfire. Because you now have a generation of kids, just like in Iraq, who see their parents humiliated in front of them. That's why they so desperately want to get the angry people out of New Orleans, and house them somewhere else. Because now you have children growing up and watching their parents being humiliated by people in uniform.

Those kids are going to grow up and remember when their dad was forced to put his hands up in the air and frisked, just to go into the place where they were sleeping at night. We've learned that lesson in Iraq--that when you humiliate generations of people, it comes back to haunt you.

The Mississippi River is like the Tigris River. The war is coming home in yet a different way.

I think we're at just the very beginning of the popular storm that is going to erupt out of this, because they're trying to take over one of the Blackest cities in this country. My sense from talking to people in the shelters is that once people put their lives back together, they're not going to sit there and take it.

This article first appeared in the September 30, 2005, edition of Socialist Worker.