Using a “crime wave” to cover up their crimes

Elizabeth Schulte looks at the facts behind the misleading headlines about crime.

"A STARTLING rise in murders after years of declines," warned the New York Times in an August 31 article claiming that murder rates were on the rise in major U.S. cities, including St. Louis, Baltimore and Washington, D.C.

The findings in the article, which cited a 60 percent rise from last year in St. Louis and 76 percent increase in Milwaukee, was picked up by other news outlets like the BBC and the Washington Post.

The timing of the article was perfect if the purpose was to take public attention in a different direction from the epidemic of racist police murders that have taken place over the last year--which the Guardian's "The Uncounted" feature puts at over 800 this year so far.

As one explanation for the spike in crime, the Times article proposed what it called the "Ferguson effect": The claim that police officers are now hesitating to stop crime because they're afraid of being under scrutiny--and in turn, people who commit crimes have become more confident to do so.

The Times article also coincides with reports of a supposed spike in the killing of police officers, which some commentators outrageously blamed on the Black Lives Matter movement. 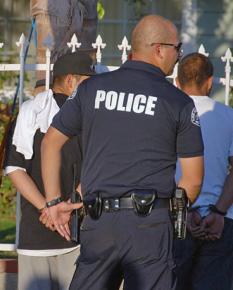 But while the timing was perfect from a certain point of view, the conclusions of Times "analysis" were anything but.

THE TIMES article reported an increase in crime in 30 U.S. cities, but not all major U.S. cities. In other words, its main claim skipped over those places where the murder rate hadn't increased. This cherry-picked data gave readers a conveniently skewed view of the numbers.

As Jim Naureckas argued at the media watchdog FAIR:

The evidence for this supposed murder wave seems to be the responses the Times got when it called police departments across the country. After the story's lead detailed a rise in homicides in Milwaukee, the story continued: "More than 30 other cities have also reported increases in violence from a year ago."

That's 30 out of a number that the New York Times does not disclose, making it a numerator without a denominator--though the story makes reference to the (steady) crime rate in Newark, which is the 69th largest city in the country, so depending on how thorough the Times' survey was, it's possible that half or more of the cities it contacted did not report any increase in violence.

Bruce Frederick of the Vera Institute of Justice responded to the Times article by taking a couple hours to look up data for 16 of the 20 most populous cities--and found that "only three experienced statistically reliable increases." He also observed that a single-year increase didn't mean there was any kind of meaningful trend, but could be a year-to-year fluctuation as numbers went up and down over time.

"The New York Times story...focused on the cities that have gotten a lot of national attention for being more violent this year than last year," John Roman, senior fellow at the Urban Institute's Justice Policy Center, told City Lab. Focusing on cities that happen to be struggling in any given year "really doesn't tell you anything about crime in America as a whole," Roman said.

According to a report released by the FBI in January, violent crime and property crime decreased in the first part of 2014--a continuation of a trend over the last two decades.

And as the Sentencing Project's Richard Rosenfeld points out, the data itself, provided by the Bureau of Justice Statistics and the FBI, is far from comprehensive. In other words, Rosenfeld writes, "everybody's data is anecdotal, a cherry-picker's delight. If you want to tell a story of crime increases, you can. If not, just pick from a different tree."

WHIPPING UP hysteria over crime is hardly a new trick. Politicians and the media have been doing it for years to win support for stricter policing, tough-on-crime legislation and skyrocketing incarceration rates. But today, it's also part of an effort to push the violence of the police out of the public eye--while emphasizing the alleged violence of the people they police.

Over time, this murder wave drumbeat has an effect on the way the U.S. population thinks about crime, the people charged with crimes, police and the laws.

Starting in the late 1970s and 1980s, politicians trying to reverse the social and economic gains won by the labor and social movements in the 1930s and 1960s used rhetoric about "coddling criminals" as an excuse to shred various social programs and institute "tough on crime" policies. The policies targeted the poor Black population of U.S. cities above all--while diverting anger at poverty away from the government and onto "criminals."

The relentlessly repeated idea that more policing and stricter laws was the only solution to the problems of poverty, government neglect and crime had an impact throughout the population: While African Americans--the disproportionate target of these draconian policies--support the idea of more punitive measures at a much lower rate than whites, it still finds a hearing in the Black community, in the absence of other solutions.

So for instance, a national survey conducted between 2000 and 2001 asked about support for "three strikes and you're out" laws--which impose mandatory life sentences on people convicted of a third serious offense. Some 70 percent of whites and 52 percent of Blacks voiced their support.

IN AN address to the Department of Housing and Urban Development's Fair Housing Policy Conference earlier this month, Attorney General Loretta Lynch linked the racist massacre of church parishioners in Charleston, South Carolina; the on-air shooting of two Virginia journalists; and the recent shooting of a police officer; concluding that:

many of our cities are seeing an increase in violence that we're looking at very closely. This wide violence against all of us, regardless of what uniform any of us wear, has to end. Our dialogue has to be focused on the preventing of violent crime as it touches all of us.

In 2011, the homicide rate for Blacks was 6.2 times higher than for whites, a gap that has persisted for more than three decades, according to Bureau of Justice Statistics. In 2012, African Americans were 66 percent more likely than whites to be victims of sexual assault, robbery, aggravated assault and simple assault.

When it comes to the crimes of the police, the racial double standard is even starker. Blacks are more likely to be stopped and harassed by police for the "crime" of being in their own neighborhood, walking down the street. A recent ACLU investigation of policing in Chicago's predominately Black West and South Sides showed that police stopped a quarter of a million people over a four-month period in 2014 without arresting them.

Blacks are not only targeted by police, but throughout the injustice system. So while whites comprise the majority of drug users and sellers in the U.S., they were only 30 percent of the state prison population with drug convictions in 2011. Nearly 60 percent of middle-aged African American men without a high school degree have served time in prison.

It's an indictment of the twisted priorities of U.S. society that its only solution to violent crime is more violent crime--committed by the police. If our government were serious about the "crime wave," it would concentrate on getting the criminals in blue off the streets and spend the money wasted on policing and so much else on programs and policies that could make a difference in ordinary people's lives, like schools and jobs.

The protests in Ferguson and in cities across the country over the last year have exposed the crimes of racist police and the warped reality of law and order in America. But it has also prompted a growing number of people to ask not only how the police get away with murder--but what we can do to end it.