In 2014, United Auto Workers (UAW) Local 2865, which represents academic workers at the University of California, passed a historic resolution in solidarity with the Palestinian struggle for justice. Last month, the UAW's International Executive Board (IEB) undemocratically overturned the result of this vote. Labor for Palestine has initiated an open letter calling on the UAW leadership to "Respect Union Democracy, Solidarity and the BDS Picket Line," as the January 28 letter is titled.

AS WORKERS, trade unionists and anti-apartheid activists, we call on the United Auto Workers International Executive Board (IEB) to rescind its undemocratic and arbitrary "nullification" of UAW 2865's respect for the Palestinian-led boycott, divestment and sanctions (BDS) picket line, which was overwhelmingly adopted by the 13,000 teaching assistants and student-workers at the University of California in 2014.

The IEB concedes that it could "find no evidence that the local union engaged in any improper actions that may have prohibited a fair and democratic vote."

Nonetheless, it sides with anti-labor corporate lawyers to defend the profits of military contractors who arm apartheid Israel. Enlisting in a well-funded witch-hunt designed to silence those who speak up for Palestinian rights, it falsely calls BDS "anti-Semitic."

In doing so, the IEB disregards more than a century of colonialism, ethnic cleansing and genocide, including Israel's establishment through the dispossession of more than 750,000 Palestinians during the 1947-48 Nakba (Catastrophe), a regime that veteran South African freedom fighters call "worse than apartheid." 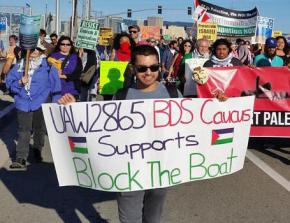 It turns a blind eye to $3.1 billion a year in U.S. military aid, with which Israel massacred 2,200 Palestinians (including 500 children) in Gaza in 2014, and inflicted a 10-year high in Palestinian casualties in the West Bank in 2015.

It refuses to acknowledge more than 50 laws that discriminate against Palestinians with Israeli citizenship.

It is deaf to urgent Palestinian trade union appeals for solidarity in the form of support for BDS.

It omits the stated goals of BDS, which demands an end to Israeli occupation and colonization of all Arab lands and dismantling the Wall; full equality for Arab-Palestinian citizens of Israel; and implementation of the right of Palestinian refugees to return.

It ignores the endorsement of BDS by Black Lives Matter activists, Jewish members of UAW 2865 and trade unions around the world.

It fails to recognize that BDS is entirely consistent with past UAW support for boycotts organized by the Civil Rights Movement, United Farm Workers and the South African anti-apartheid movement.

Add your name to this open letter calling on the UAW's leadership to respect union democracy, solidarity and the BDS picket line.

You can sign onto two additional petitions in support of UAW Local 2865's historic vote being circulated by the U.S. Campaign to End the Israeli Occupation and Jewish Voice for Peace.

Lacking any semblance of fairness, the IEB's decision has been appealed to the UAW's Public Review Board.

In the 1940s, UAW and other top U.S. labor leaders actively supported the Nakba. UAW president Walter Reuther was closely allied with future Israeli Prime Minister Golda Meir, who later infamously pronounced, "[t]here were no such things as Palestinians."

In the 1950s, UAW conventions passed pro-Israel resolutions and raised funds for the Histadrut, the Zionist labor federation. Reuther's brother, Victor, served as U.S. spokesperson for the Jewish National Fund, which remains at the forefront of seizing Palestinian lands. In subsequent years, "the UAW may have been the largest institutional purchaser of Israel Bonds," which fund dispossession of the Palestinian people.

In 2007, International UAW leaders signed a statement drafted by the Jewish Labor Committee that attacked unions in the UK for endorsing BDS.

Rank-and-file UAW members have a history of challenging this pro-apartheid stance.

We intend to throw our weight behind the BDS movement to add to the international pressure against Israel to respect the human rights of the Palestinian people. As workers, students, and as a labor union, we stand in solidarity with Palestinians in their struggle for self-determination from a settler-colonial power.

UAW 2865's courageous vote was paralleled by ILWU Local 10 members who refused to handle Israeli Zim Line cargo in 2014, and has been followed by adoption of BDS resolutions by the United Electrical Workers and Connecticut AFL-CIO in 2015.

Attempts to silence this growing solidarity movement are doomed to failure, as reflected in the National Labor Relations Board's recent dismissal of a challenge to the UE's BDS resolution.

No letter from the IEB can erase the educational and organizational work we have done over the past year, work we will continue to do, energized no doubt by the IEB's undemocratic, business­friendly attempt to nullify this vote...

We are part of a growing movement for union solidarity with the people of Palestine and for a democratic and visionary U.S. labor movement. As workers, educators and students, we know together we can prevail over these forms of repression and continue striving for justice for all peoples.

Sharing that vision, we stand shoulder to shoulder with UAW 2865 in respecting the BDS picket line.