Our struggles link us together

One of the best-known figures from a previous era of radicalization has collected her insights into a new book. Leela Yellesetty recommends them to a new generation.

IN THE summer of 2014, images spread across the world of protesters in Ferguson, Missouri, facing down against police in riot gear, driving tanks and hurling tear gas grenades in the wake of the police shooting of Black teenager Michael Brown.

Activists in Gaza recognized the scene. In fact, they recognized the tear gas--the same kind used by Israel, thanks to support from the U.S. government, which also unloads its surplus military equipment on police departments across the country. The connection didn't stop there, as reports began to surface that Ferguson police officers had received training from Israeli security forces.

Palestinian activists began tweeting advice to the protesters in Ferguson on how to deal with the gas: "Solidarity with #Ferguson. Remember to not touch your face when tear-gassed or put water on it. Instead use milk or coke!"; "Don't Keep much distance from the Police, if you're close to them they can't tear Gas. To #Ferguson from #Palestine."

It was just one of many moments in recent years, as we witness a global awakening against economic crisis, racism and war, where activists have drawn parallels and taken inspiration from one another--from the signs protesting anti-union Wisconsin Governor "Hosni Walker" during the 2011 Capitol occupation, in reference to the Egyptian Revolution, to the encampments in public squares spreading across the Middle East and Europe to the U.S. during the Occupy movement. 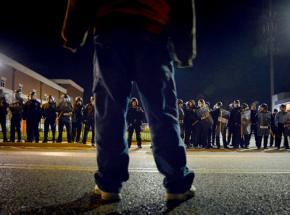 Angela Davis' new book could not be timelier, as a new generation of activists begins to assess the significance of these connections, both for understanding the world we live in and what it will take to change it.

Freedom Is a Constant Struggle: Ferguson, Palestine and the Foundations of a Movement, a collection of recent interviews, articles and speeches from Davis, manages to fill a slim volume with so many valuable insights that it is painful to have to summarize. Really, you should just read it!

Davis is one of the most recognizable figures from the last period of mass radicalization in the 1960s and '70s. In the decades of right-wing backlash and employers' offensive that followed, many '60s radicals who weren't killed or imprisoned either dropped out of politics altogether or dropped their revolutionary views in favor of working within the system.

Davis is one who has remained steadfast in organizing, writing and speaking out for radical social change, from her longstanding work around prison abolition to championing the cause of Palestinian rights. She is a living link to the last period of struggle, and her experience provides invaluable lessons for the those looking to change the world today.

Angela Davis, Freedom Is a Constant Struggle: Ferguson, Palestine and the Foundations of a Movement. Haymarket Books, 2016, 180 pages, $15.95.

WHILE THE chapters skip around in time and subject matter, a number of central themes emerge in the book: the continuity of the present Black Lives Matter movement with the historic Black freedom movement, the centrality of collective struggle in making change and the importance of intersectionality as both a theoretical framework and a guide to action.

This spring marks the 50th anniversary of the founding of the Black Panther Party. While Davis wasn't an official member of the Panthers (due to her conflicting membership in the Communist Party), she worked closely with them and shared many of their perspectives. In many of her speeches, she comes back to their Ten-Point Program as it continues to resonate today.

The program outlined a set of demands based on a broad vision of what it would mean to win full liberation, from ending police brutality and mass incarceration to "Land, Bread, Housing, Education, Clothing, Justice And Peace."

As Davis points out, these demands grew out of an awareness in the late '60s that civil rights and formal equality were not enough, that it was necessary to address the economic and institutional structures of racism. This is even more true in an era in which we have a Black president yet the vast majority of Black people remained mired in poverty and live with the daily brutality of the police and the prison system.

She also points out that the Panther's demands represent unfinished business from the movement that abolished slavery, referencing the often-overlooked period of Radical Reconstruction following the Civil War:

It certainly remains the most radical era in the entire history of the United States of America. And this is an era that is rarely acknowledged in historical texts. We had Black elected officials, the development of public education. As a matter of fact, former slaves fought for the right to public education; that is to say, education that did not cost money as your education here costs. I'll say parenthetically--the fight was for noncommodified education. And as a matter of fact white children in the South, poor white children who had not had education, gained access to education as a direct result of the struggles of former slaves. There were progressive laws passed challenging male supremacy. This is an era that is rarely acknowledged.

Another central theme running throughout is the importance of understanding these struggles as collective endeavors. Discussing the legacy of the Montgomery Bus Boycott, she reflects that nearly everyone knows about Martin Luther King and Rosa Parks, but not Jo Ann Robinson and the other women who organized the boycott, or Claudette Colvin, who was also arrested for refusing to give up her seat. Davis writes:

How can we counteract the representation of historical agents as powerful individuals, powerful male individuals, in order to reveal the part played, for example, by Black women domestic workers in the Black freedom movement?

Regimes of racial segregation were not disestablished because of the work of leaders and presidents and legislators, but rather because of the fact that ordinary people adopted a critical stance in the way in which they perceived their relationship to reality. Social realities that may have appeared inalterable, impenetrable, came to be viewed as malleable and transformable; and people learned how to imagine what it might mean to live in a world that was not so exclusively governed by the principle of white supremacy. This collective consciousness emerged within the context of social struggles.

AS DAVIS argues, women have always been central participants and leaders in the Black freedom struggle, though their contributions are not always acknowledged. The concept of intersectionality arose at a moment when the civil rights movement had inspired a feminist movement, and Black women were attempting to construct a synthesis of the two, rooted in a structural analysis of how different forms of oppression operate in interlocking ways.

In recent years, the term has become popular in academia, but as Davis cautions:

I think it's important to prevent the term "intersectionality" from erasing essential histories of activism. There were those of us who by virtue of our experience, not so much by virtue of academic analyses, recognized that we had to figure out a way to bring these issues together. They weren't separate in our bodies, but also they are not separate in terms of struggles.

Indeed, for Davis, mapping the connections between racism, sexism, imperialism and capitalism is not simply a matter of understanding individual experiences, but is the basis for solidarity and common struggle. Historically, the Black struggle in this country has been both inspired by and inspired social movements across the globe, from India to South Africa to Palestine.

Discussing the intertwined history of slavery and the genocide of Native Americans, Davis notes, "Our histories never unfold in isolation. We cannot truly tell what we consider to be our own histories without knowing the other stories. And often we discover that those other stories are actually our own stories."

Davis provides a wealth of other illuminating examples of these intersections, from the role of the world's largest private security company G4S in running everything from detention centers in Palestine to prisons and prison-like schools in America to sexual assault centers in Britain, to how the understanding the experiences of trans prisoners sheds light on the system of mass incarceration and enriches feminist theory, to why Islamophobia and attacks on immigrant are built on the foundation of anti-Black racism, to how state violence perpetuates domestic violence, and many more.

Simply drawing attention to these connections is not enough. We have to do the hard work of building movements and trust among activists. But Davis continually reminds us that this work can and must be done, and that narrowing our focus to individual causes only undermines our ability to win, and makes us susceptible to "false solutions" which leave the system of exploitation and oppression intact.

As daunting as this project can seem at times, as many obstacles as we face in both uniting and confronting the powerful forces aligned against us, Davis' message is one of confidence in the ability of ordinary people to collectively change the world. As she notes, the only reason she is here today, was because a mass, international movement won her release on trumped-up murder charges in 1972:

I don't think we have any alternative other than remaining optimistic. Optimism is an absolute necessity, even if it's only optimism of the will, as Gramsci said, and pessimism of the intellect. What has kept me going has been the development of new modes of community. I don't know whether I would have survived had not movements survived, had not communities of resistance, communities of struggle. So whatever I'm doing I always feel myself directly connected to those communities and I think that this is an era where we have to encourage that sense of community particularly at a time when neoliberalism attempts to force people to think of themselves only in individual terms and not in collective terms. It is in collectivities that we find reservoirs of hope and optimism.