Hillary Clinton says she'll make history as the first woman president, but no other candidate so represents a continuation of the same old thing, writes Elizabeth Schulte.

THERE'S NO denying that women could use a "historic" breakthrough. We could use quite a few, if anyone is offering.

Contrary to those who argue that we live in a post-feminist era, where sexism is a thing of the past, women are still, by almost any measuring stick, unequal to men in U.S. society. Wages, access to health care, domestic violence, sexual assault and the justice system's failure to bring any semblance of justice in these cases--all reflect that deep-seated inequality.

So yes, we could use a few historic victories. But Hillary Clinton's nomination as the first woman presidential candidate of a major party isn't one.

After victories in the June 7 primaries made it clear that she was the presumptive Democratic nominee, Clinton took the stage in a packed room of supporters in Brooklyn--preceded by a video of montage of suffragettes marching and iconic women leaders like Shirley Chisholm, Dolores Huerta and Gloria Steinem. Supporters held up giant letters spelling "HISTORY."

"Tonight's victory is not about one person," Clinton told the crowd. "It belongs to generations of women and men who struggled and sacrificed, and made this moment possible...So we all owe so much to those who came before, and tonight belongs to all of you." 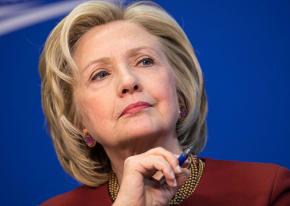 Clinton wasn't the only one putting herself smack dab in the center of history--so did much of the media, as well as some prominent movement figures, like Huerta, the civil rights and farmworker activist, who said the next day on Democracy Now!: "It will be a very interesting race to see Mr. Super Macho, Mr. Donald Trump, run against a feminist, Hillary Clinton, with very different values."

THIS WILL become a familiar refrain as the campaign for president continues--that it's a choice between making history with Clinton or turning back the clock with Trump.

To be sure, the fact that there has never been a woman president, and that there are fewer women in positions of power, speaks to the sexism in U.S. society--which has such deep roots that even women at the highest rungs are impacted to some extent.

The Republican right has regularly lobbed sexist attacks at Clinton, and Trump is no exception to that rule. "I think the only card she has is the women's card--she's got nothing else going," Trump raved in April. "And frankly, if Hillary Clinton were a man, I don't think she'd get 5 percent of the vote."

Her record shows a Hillary Clinton presidency would mean the opposite. She has proven her allegiance to corporate power, sitting on the board of Walmart, no less. And she has supported policies that specifically target poor and working-class people, backing Bill Clinton's crime bill and the shredding of welfare programs. As secretary of state, she imposed U.S. power abroad, supporting secret drone warfare in Yemen, Pakistan and Somalia and the deadly troops surge in Afghanistan.

Another myth is that Clinton's is an "outsider" campaign, which she has also claimed. On the contrary, a Clinton presidency represents the continuation of the status quo in Washington--above all, the disappointing presidency of Barack Obama.

The Bernie Sanders campaign provided a glimpse into what it might look like for a U.S. election to take up issues that affect working-class people, like single-payer health care, a $15 an hour minimum wage and taxing the rich. But now that the Democratic Party establishment's candidate is in place, there's no room for that debate.

Instead, as the limitation of the U.S.'s two-party electoral system dictates, the only option for people who don't support the Republican is to support the Democrat, even if she stands for policies that you oppose. The dominant logic is to vote for the lesser of two evils.

THERE ARE, of course, differences, on issues like union rights or women's access to abortion, that set the Democrats apart from the Republicans--otherwise, people wouldn't have any reason to choose one or the other. But the differences between the two parties are smaller than what the Democrats and Republicans share as committed servants of U.S. capitalism at home and abroad.

In certain ways, the Democrats have been more successful than Republicans in fulfilling this obligation to Wall Street and Corporate America. During his presidency, Bill Clinton--who might serve as "economy czar" in a new administration, according to the Hillary Clinton campaign--supported and signed into law more financial deregulation legislation than any other president. That includes dissolving the Depression-era Glass-Steagall law, which barred investment banks from commercial banking activities--and deregulating the risky derivatives market, which paved the way for the financial meltdown to come.

During the Obama administration, Wall Street again made out like bandits, while the working class saw the gap between rich and poor grow. The rich came out of the Great Recession better off than before, because they were getting a bigger piece of the pie: The top 3 percent of families took home 30.5 percent of total income in 2013, up from 27.7 percent just three years before in 2010.

At its heart, the Democratic Party serves the interests of capital and the few at the top, not the majority of the population that is expected to vote for it. Yet every four years, the differences between the two parties, no matter how small or limited to certain issues, will be exploited by party leaders and their loyal supporters to win votes and avoid criticism.

Some people argue that Clinton has "evolved" on certain issues--like gay marriage, which she opposed until recently, or mass incarceration policies, which Clinton criticized during the campaign after having supported the 1990s crime bills that propelled them forward. That "evolution" will be taken as a reason to support Clinton in November.

"Hillary Clinton is good on LGBT issues," columnist Dan Savage told Stephen Colbert in an interview in May. "She wasn't always good on gay marriage, but neither was Barack Obama...When you go to somebody, go to a politician, and you say, 'Please change your mind,' when they change their mind, you don't then spend the rest of their lives going, 'F*ck you for not changing your mind sooner!' You say, 'Welcome to the right side of this issue, we're glad to have you.'"

This argument puts the emphasis in the wrong place--Clinton's personal "change of heart"--and underestimates the thing that produced it: the protests and political awakening that shifted public consciousness about equal marriage and LGBTQ rights. That's ultimately why Clinton and Obama changed their tune.

The same goes for Clinton's conversion about the 1990s crime bills. If it wasn't for the protests of Black Lives Matter activists, the years of organizing by criminal justice and prison rights activists who came before them, and people like Michelle Alexander and her book The New Jim Crow that brought to light the everyday racism of the criminal justice system, Clinton would never have changed her mind.

These aren't examples of why you should vote for Hillary Clinton. They're examples of why we can't trust mainstream political leaders like her to work for our side--and why we have to organize independently from the Democrats.

CLINTON IS boasting about her place in history, but the Clintons of the world aren't the ones who really make history. Fundamental change--things like the eight-hour day, the end of Jim Crow segregation, marriage equality--come from working-class people organizing for these demands.

When teachers went on strike in Chicago in 2012, they took on a wave of neoliberal policies that seemed unstoppable and tapped into the thirst for resistance against a school "reform" agenda that was destroying public schools--and against its main promoter, Rahm Emanuel, who not coincidentally helped destroy welfare and pass the crime bills during the Bill Clinton administration.

Some 30,000 teachers shut down the schools, and tens of thousands more parents, students and the rest of working-class Chicago stood with them. The fight for public schools is far from over, but the strike showed what it took to stop the neoliberal steamroller.

Today, the pressure will be on to vote for Hillary Clinton to keep Donald Trump out of the White House. But voting for Clinton, who is clearly the representative of the status quo in this election, not only lowers expectations about what we should demand, but weakens our side.

The Democratic Party will never work in the interest of working people. We need to build a political alternative that takes on corporate greed and builds up the power of the working class, not forces it to compromise and concede.