Together in Montreal for a better world

The World Social Forum (WSF) will open later this week in Montreal, bringing together people from around the world to discuss the important questions facing social justice movements in their countries. The WSF, which turned 15 years old this year, is a forum for hundreds of discussions, carried out over several days. The International Socialist Organization, publisher of SocialistWorker.org, is sponsoring several panels, including "From Black Lives Matter to Black Liberation," "Revolutionary Marxism: The Politics of Socialism from Below" and "Fighting for BDS: Facing Down Israel's Backlash"--click here to find out when and where these meetings take place. The ISO is also helping to organize a Socialist Night at the WSF party--SW readers at the WSF are encouraged to join us.

Below, Pierre Beaudet, a member of the International Council of the World Social Forum who participated in the organization of the Montreal WSF, outlines what to expect in Montreal, in an article written for the Socialist Project's Bullet. -- The editors

THOUSANDS OF people from over 95 countries are expected to gather in Montreal on August 9-14 for a social movement summit called the World Social Forum (WSF). Participants will spend a week attending a great variety of workshops, lectures and cultural events--more than 1,200 in total. Famed author Naomi Klein will be giving two talks that are sure to be among the highlights of this unique event, which is designed to allow social activists and scholars to grapple with a host of economic, social, environmental and cultural questions facing the contemporary world. And Klein is just one of a raft of influential speakers who will be engaging audiences at the WSF. The Forum will unfold throughout downtown Montreal at Université du Québec à Montréal, Concordia University and McGill University as well as in many parks and other venues outside the universities.

An annual event that usually takes place in the developing world, the WSF is being held in Montreal following a decision made at last year's event in Tunis to bring the Forum north, to a city which has been the site of striking social and political creativity over the last decade, with such movements as Quebec's Maple Spring in 2012. [see Bullet No. 680] 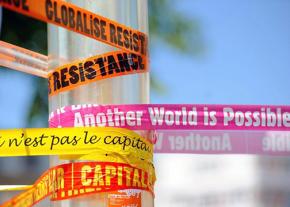 The WSF originated in 2001, in Porto Alegre, Brazil, as a response to policies designed to accelerate globalization, a process seen by corporate leaders and governments as well as powerful institutions such as the World Bank and the International Monetary Fund as the recipe for prosperity. NGOs and social movements from Brazil and from abroad gathered to examine the impact of globalization on the lives of working people and the poor and discuss how to alter globalization to redress the fundamental problems of inequality, environmental degradation and lack of democracy.

After its initial success in Brazil, international, national and regional forums were organized in India, Kenya, Senegal, Pakistan, Mali, Venezuela and some 50 other countries. The discussions revolved around how to design and implement alternatives to conventional political, economic and social policies. However, the Forum was not conceived as an executive committee for social movements worldwide. It is an open platform aimed at exploring ideas, sharing experiences and broadening perspectives on how to effect change.

In 2008, with the eruption of the financial crisis, the idea that economic globalization is the wrong answer to many of the challenges that we face gained steam. Today in 2016, more than 70 percent of the world's population lives on less than $10 per day. In the rich countries of the North, austerity is the new watchword and public services are threatened. Moreover, the prevailing economic and political system is failing utterly to address the looming disaster of climate change. War and militarization have thrown whole regions of the world into chaos, which is the source of the escalation of desperate and violent acts in so many countries.

Faced with this grave crisis, citizens and social movements are taking stock. What can we do? Is there another way, an alternative approach that can help us relieve these destructive pressures?

In recent years, the WSF has been buoyed by the popular demands for social justice and democracy in Southern Europe (the Indignados), North Africa and the Middle East (the Arab Spring), and even the United States (Occupy Wall Street). There is a growing awareness of the need to consider alternatives to policies that primarily benefit elites, as was evident in the U.S. with the Bernie Sanders campaign.

Those gathering in Montreal for the WSF are also especially concerned with the growth of an authoritarian politics of hate and blame as embodied, for example, by Donald Trump in the U.S., Marine Le Pen in France and Geert Wilders in Holland. This dangerous current seeks to exacerbate the rising repression against refugees, migrants, Indigenous peoples and many disadvantaged communities.

Changing the social and economic conditions that offer fertile ground for the resurgence of the extreme right is among the urgent tasks the groups and individuals meeting in Montreal will turn their minds to at the World Social Forum. As the WSF slogan puts it: "Another world is needed. Together it is possible."

First published at the Bullet.