With Hillary Clinton and Donald Trump setting new lows in trustworthiness according to polls, it's good to know you don't have to settle for voting for the "lesser of two evils."

HILLARY CLINTON and Donald Trump may be trying to seem as different from each other as possible, but they have one thing in common that they can't escape: how unpopular they are.

Months before the November 8 election, opinion polls showed that Clinton and Trump might be the most disliked and distrusted pair of politicians ever to face each other in a U.S. presidential election.

After Trump's one-after-another bungles and blunders over the summer, Clinton is favored to win--she holds a 10 percentage point advantage and more in some polls. But beneath those numbers lie an avoidable truth: People deserve a better choice.

And they know it--especially younger voters. According to two Washington Post-ABC News surveys in August, among voters under the age of 35, 72 percent said they have an unfavorable view of Trump, and 49 percent said the same of Clinton. When asked what they thought of the choice itself--Clinton versus Trump, 68 percent said they were dissatisfied.

The first half of Election 2016 was very different--mainly because of the campaign of Bernie Sanders for the Democratic nomination. 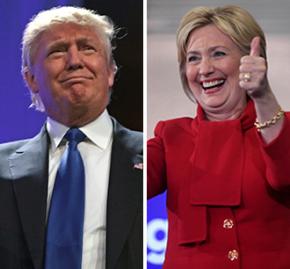 Though he was always the longest of long shots to actually win, Sanders brought issues that actually concern most voters, like inequality and corporate greed, into the political spotlight. He gave millions of people an opportunity to register their disgust with the two-party status quo.

Now, it's back to the same-old, same-old for American presidential politics: evil versus evil, maybe different in degree, but still the same main ingredient.

AFTER THE party conventions in July, the Clinton campaign couldn't have been more confident.

It had it in the bag--endorsements from big business billionaires like Warren Buffett, former five-star generals and a significant number of disaffected Republicans. The already tested and proven status quo candidate was clearly on her way to the White House.

Meanwhile, Donald Trump seemed to be competing in his own personal Olympics that awarded gold medals for xenophobia and ignorance. Even when his own advisers claimed Trump would make a shift toward being more "presidential" and less, well, Trumpadential, Trump kept on spewing vile hate toward Muslims, immigrants and other targets.

After he criticized family members of a Muslim U.S. soldier killed in Iraq who spoke at the Democratic convention, the outraged backlash should have convinced Trump to shut up. Instead, he doubled down on his Islamophobia and a couple weeks later plugged a plan for "extreme vetting" of Muslims wishing to emigrate to the U.S.

Among his proposals is an ideology test for new immigrants arriving in the U.S. "Those who do not believe in our Constitution, or who support bigotry and hatred, will not be admitted for immigration into the country," Trump declared.

Good thing for Trump that he isn't trying to get into the U.S. under a President Trump.

Faced with the choice between Clinton and Trump, some voters say that they may choose to sit this one out.

"I'm not going to vote. I'm just not," Dustin McKindsey, a 26-year-old handyman in Madison, Wisconsin, told the Washington Post. "This is the first time I've felt that way...A choice between two stones that'll sink."

McKindsey is part of the generation where the discontent is concentrated. A GenForword poll, for example, found that 7 in 10 voters aged 18-30--including majorities of Blacks, Asians and Hispanics--say they are unsatisfied with the contest between Clinton and Trump, and want the option of a third-party candidate.

This is a sharp contrast to Barack Obama's 2008 presidential campaign, which generated excitement in large part because he appeared to come from outside the political establishment and offer the hope of change. He would become the first Black president in a country founded on slavery and still steeped in racism.

With her decades as a leading figure in the Democratic Party, a senator, a secretary of state--and her long record of helping to demolish welfare, pass draconian crime bills, defend imperialist wars, and green-light right-wing coups--Clinton is without a doubt a candidate of American capitalism's status quo.

If she was running against anyone other than Trump, the Democrats would have a lot more to worry about.

Where Trump has won support, it's because his campaign message acknowledges that living conditions and economic prospects have declined for all but a minority of people at the top of the income ladder. He focuses the blame on scapegoats like immigrants and Muslims, but the discontent he seeks to exploit is real.

Hillary Clinton, on the other hand, has "more or less openly offer[ed] herself as the complacency candidate," as left-wing author Thomas Frank wrote. When the "alternative" to Trump has nothing but platitudes about how America is already great to say in response, it allows Trumpism to metastasize and grow.

DISSATISFACTION WITH Clinton and Trump is leading some voters to turn elsewhere. According to a Washington Post-ABC News poll, one-quarter of younger voters say they would support a third-party candidate.

Right now, the biggest share of the third-party vote is going to the Libertarian Party's Gary Johnson, a right-winger who is, as Travis Richard Sweatte put it in an article for Jacobin, the candidate of "America's third capitalist party."

On the left, however, Green Party presidential candidate Jill Stein is galvanizing those who want to a choice beyond what the Democratic Party will allow. Her message against corporate greed, environmental destruction and endless war has won her a significant level of support for an independent left candidate.

For her running mate, Stein chose Ajamu Baraka, the founding executive director of the U.S. Human Rights Network, with decades of experience fighting for Black liberation and championing struggles against U.S. imperialism's crimes in the Middle East, Central America, Africa and elsewhere.

SocialistWorker.org has been very critical of some positions taken by Stein and Baraka--in particular, Baraka's open support for the brutal repression carried out by the regime of Bashar al-Assad in Syria against a popular pro-democracy uprising now more than five years old. Baraka--and Stein to a lesser extent--promote a view disappointingly common on the left that must be confronted with clear anti-imperialist politics that reject all forms of authoritarian rule.

In general, the Stein campaign has stood out for its strong left-wing message and uncompromising commitment to creating a left alternative independent of the Democratic Party. She has set an example of how to withstand the accusation that voting for anyone but Clinton is helping the Republicans.

Asked by George Stephanopoulos on ABC's This Week if she was afraid of she might "lose the election for Clinton," Stein said, "Politicians do not have a new form of entitlement. They are not entitled to our vote. They have to earn our votes. And Hillary Clinton and Donald Trump have not earned our vote."

IF YOU'VE been told that you have to hold your nose and vote for Hillary Clinton, no matter how much you hate everything she stands for, in order to stave off the Trump disaster, first, you aren't alone; and second, you should definitely reconsider.

The Trump campaign is despicable. It has advanced anti-immigrant and anti-Muslim hate into the national political debate and given an opening for those even further to the right to gain a hearing for their hate.

The truth, however, is that Hillary Clinton won't do anything about Trump. She won't challenge the Islamophobic and anti-immigrant bigotry of the Republican candidate, because she and the Democratic Party rely on their own versions of this scapegoating and scaremongering.

As on so many other issues, we need to organize a left-wing response to these attacks that doesn't compromise by supporting a Democratic hawk over a Republican monster. Earlier this year, activists in Chicago showed how to set the racists back on their heels when they came together--immigrant, Latino, Arab, Muslim, Black, white--to protest Donald Trump, and sent his campaign packing.

For too long, people who support something left of the Democratic Party have felt pressured to put off their hopes and aspirations to settle for whatever the "party of the people" promises, and with no intention of delivering.

As so many people seem to have already concluded, we deserve better. You can take one step for building an independent left-wing alternative by voting for Jill Stein on November 8.

But there is a larger project of building resistance to austerity, war and oppression that needs to take place on November 9 and every other day of the year.