Looking out for number 1 Percent

Donald Trump claims that his presidency will put ordinary Americans first, but his economic agenda is devoted to serving the super-rich, writes Vincent Michael.

DONALD TRUMP'S abysmally low approval rating of 37 percent makes him the least-popular incoming president in at least 40 years--something made concrete by the truly massive protests that took place on Inauguration Weekend.

He and his administration hope they can maintain some level of popular support by delivering on his promise to create 25 million American jobs over the next decade. But the truth is that Trump's economic policies--when understood for what they really represent--will make him even more unpopular going forward.

Trump's economic agenda incorporates elements of intensified neoliberalism--tax cuts, deregulation, reduced social spending and an emphasis on the private sector taking over the provision of public goods. But he has also promised to restore U.S. manufacturing by reversing free trade policies that have been a hallmark of the neoliberal Washington consensus for many decades.

This blend of neoliberalism and not-neoliberalism lies behind Trump's specific proposals, including: greater tax breaks for individuals and corporations; $1 trillion in infrastructure investment; a reorientation against free trade policies, particularly regarding economic agreements like NAFTA or the Trans-Pacific Partnership; privatization of government programs like Social Security and health care programs ranging from Medicare to Obama's Affordable Care Act; and deregulation of finance and extractive industries. 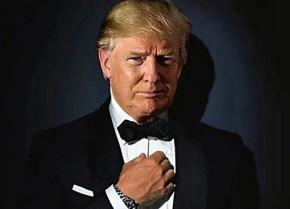 The extent to which Trump can enact his agenda is uncertain. There are rivalries within the new administration and among Republicans--GOP leaders of Congress and some of his cabinet choices, like ex-ExxonMobil CEO Rex Tillerson and Goldman Sachs' Gary Cohn and Steve Mnunchin, are unlikely to favor protectionist measures.

Plus, some of America's most powerful corporations--and thus the most powerful donors to the Republican and Democratic Parties--rely on exploiting cheap labor in countries around the world. They may not take kindly to any Trump policy that makes this harder.

Most important, public outrage and grassroots organizing could challenge the Trump agenda, like his drive to slash social spending that benefits workers and the poor and to privatize popular programs like Social Security.

At the start of his presidency, it is worth taking each of Trump's proposals in turn and asking the question: Who benefits?

TRUMP'S CALL for a new round of tax cuts ought to be the easiest proposal to see through. Trump says restructuring the tax code will promote economic growth, but like when George W. Bush did it in the early 2000s--tax cuts will mainly promote corporate profits and the wealth of the already super-rich.

Trump's plan for income taxes would cut tax rates at all income levels, but this, of course, disproportionately benefits the wealthy. According to the Tax Policy Center, the wealthiest 0.1 percent of taxpayers--those with incomes over $3.7 million would get an average tax cut of $1.3 million for 2017, while middle-income households would receive around $2,700 a year.

Trump also says he will slash taxes on U.S. corporations, even though Corporate America's actual tax bill is ridiculously low, relative to its vast wealth. The top marginal tax rate on corporate income is 35 percent, but after various exemptions and breaks, U.S. business pays much less. Trump wants to slash the top corporate rate to 15 percent.

To avoid paying anything at all in U.S. taxes, American corporations currently hold $2.6 trillion in profits overseas, according to Congress's Joint Committee on Taxation. To incentivize corporations to return their profits held overseas back to the U.S., Trump would institute a tax holiday, under which the rate on repatriated profits would be just 10 percent.

Trump claims this money would then be invested to create some of the millions of jobs he's promised. But businesses invest in new operations and jobs if the prospects for profit are higher than the alternatives. Corporate profits within the U.S. rebounded quickly after the Great Recession of 2007-08, but that didn't translate into companies devoting money to building new factories and offices, or adding employees.

Moreover, less than half of the $2.6 trillion in overseas profits is liquid, according to estimates--around $1.5 trillion has already been invested in foreign operations.

As the Intercept's examination of earnings calls and investor conference talks reveals, many corporations are telling analysts they won't invest repatriated profits in production if they do take advantage of Trump's tax holiday.

As with the Bush-era tax cuts, they're more likely to use the money to increase dividends and stock buybacks or to purchase competitors. Trump's tax cut could boost stock prices--indeed, the Dow Jones stock index has kept on climbing since his election--but this won't benefit the majority of working-class people who own little to no stock.

ANOTHER MAJOR component of Trump's economic agenda is infrastructure development.

U.S. infrastructure is in dire straits. According to the American Society of Civil Engineers, $3.6 trillion is needed just to rebuild existing infrastructure. The American Road & Transportation Builders Association estimates that almost 60,000 bridges were structurally deficient in 2016.

Yet federal investment in infrastructure has dropped by half relative to gross domestic product over the past three decades.

Thus, Trump's plan to spend $1 trillion on infrastructure over the next four years may seem bold, but it falls far short of what's needed.

Plus, his proposal shifts the focus from direct government spending on infrastructure profits. Instead, it relies heavily on public-private partnerships, in which private investors get huge tax breaks--to the tune of 82 percent of their investment--to carry out construction. And afterward, the private investors own the infrastructure--and can profit from tolls, fees and other charges.

There are a number of implications to this approach:

Taxpayers will pay twice--once to cover the tax breaks for private firms and a second time to use the infrastructure.

Putting construction in private hands will cost more. Governments can borrow at lower interest rates than private companies, so they can build infrastructure projects for less. Given that financing comprises roughly half the cost of infrastructure projects, as public banking advocate and author Ellen Brown has shown, that's huge sums of money which end up in the pockets of the bankers, rather than creating jobs.

Since profit is the motive, the private sector will tend to pick and choose what and where to build. Since tolls and charges for privately built infrastructure is a big incentive in the project, private investors will be less likely invest in projects in poor areas where residents can't afford the fees. And as economic commentator Paul Krugman pointed out, private companies will be less motivated to invest in infrastructure that doesn't generate revenue streams, like sewage systems.

Infrastructure projects in any form may not be the job-creating dynamo Trump claims they will be, since construction is highly mechanized nowadays.

Trump has promised deregulation that would "streamline permitting and approvals" for all government operations. Since the private companies in charge of building infrastructure are motivated by profit above the public good, deregulation could enable shoddy and environmentally ruinous projects.

Plus, Republicans are determined to skirt the law requiring contractors to pay the "prevailing wage" on federal construction projects--a sure way to undermine the building trades unions that have foolishly given their support to portions of Trump's agenda.

WOULD TRUMP'S push to renegotiate NAFTA or impose tariffs on Chinese imports lure investment in U.S. manufacturing and lead to job creation? Most economic analysts agree, whatever side of the political spectrum they're on, that the answer isn't so simple.

For one thing, there is plenty of evidence to dispute Trump's major claim that "unfair" trade has been the chief source of manufacturing jobs being lost in the U.S. Technological innovation and increased efficiency appear to be a more significant factor, according to many studies.

And there's absolutely no guarantee that any new jobs created in manufacturing or any other sector will be living-wage jobs--especially if an anti-labor "right-to-work" law is enacted at the national level.

If the Trump administration succeeds in deregulating financial and extractive industries, energy companies in particular will almost certainly see higher profit rates, and that could spur investment and some job creation. This, in fact, has already happened--the Obama administration's "all of the above" energy policy produced boom times for tar sands oil and natural gas fracking--at least until oil prices plummeted in 2015.

One thing is certain, though: Any new energy boom would come at the expense of the environment, with potentially disastrous consequences for people and the planet.

Trump's cabinet picks, like climate change skeptic Scott Pruitt to run the Environmental Protection Agency, are signaling that laws like the Clean Power Plan, which is far from adequate to begin with, could be gutted. American automakers have already called on Trump to lower fuel economy and emissions rules.

Although the Trump administration's policies will surely be anti-environment, we shouldn't forget that his agenda in this area will be in keeping with where things were headed under Obama, as climate activist Bill McKibben has documented.

LOOMING BEHIND all of these possible sources of some job creation, with all their drawbacks, is the certainty of lost jobs and reduced economic output as a result of the strangulation of federal government spending when Trump's tax cuts blow a hole in the U.S. budget deficit.

How would the government cover this massive loss in income? One ripe target for cuts might be the bloated Pentagon budget. But reductions aren't likely there considering that Trump has promised to restore the supposedly "depleted" U.S. military.

Instead, the growing federal government debt will be used as a pretext for slashing or eliminating government programs that benefit working people and the poor.

Trump didn't make privatization of Social Security or other entitlement programs a central campaign theme, though this has been an obsession of other Republican leaders, like House Speaker Paul Ryan, for many years.

But we do know that Republicans in the White House and Congress are agreed on slashing away at other parts of the federal budget. TheHill.com calculated that Trump's administration is preparing $10.5 trillion in cuts over 10 years--some of the targets include Department of Justice and Department of Energy programs, two of the State Department's programs focused on climate change, the National Endowment for the Arts, the National Endowment for the Humanities and the Minority Business Development Agency.

Trump's transition team has reportedly been using a 2016 Heritage Foundation report as the basis for its proposals. While the extent of the cuts could be unprecedented, mainstream conservatives have been itching for the opportunity to impose these reductions

Meanwhile, the Trump administration is moving full steam ahead with another obsession of congressional Republicans: Repeal the Affordable Care Act signed into law by Barack Obama.

Repealing Obamacare would be an immediate bonanza for a small number of rich individuals: One of the major sources of financing for the ACA is a 3.8 percent tax on net investment income for taxpayers with incomes over $200,000. Eliminating that and other taxes implemented to pay for the ACA would put another $165,000 a year in the pockets of households with incomes over $1.9 million.

Meanwhile, the bottom 60 percent of the population--households earning less than $67,000 a year--would pay more in taxes if the credits they get from the ACA disappear with its repeal.

In general, the super-rich make out coming and going with an economic program like the one Trump is pushing. They are the main beneficiaries of tax cuts, whether on individuals or corporations. And when those tax cuts starve the federal government of revenue, the skyrocketing deficit becomes an excuse for spending cuts and privatization schemes that also function to transfer wealth from the bottom to the top.

Like every part of his reactionary agenda, Trump's economic policies will be a disaster for the vast majority of working people. We have to expose the truth about them--and build a united resistance.