Why we’re taking action on March 8

March 8 is International Women's Day, but this year, it will also be an international day of action in more than 30 countries. Organizers of the massive Women's March on Washington on January 21 are among the supporters of a call by prominent scholars and activists for a women's strike that will organize resistance "not just against Trump and his misogynist policies, but also against the conditions that produced Trump, namely the decades-long economic inequality, racial and sexual violence, and imperial wars abroad."

Keeanga-Yamahtta Taylor, the author of From #BlackLivesMatter to Black Liberation and a member of the National Planning Committee for the International Women's Strike USA, talked to Socialist Worker about what March 8 could bring to the new resistance.

WHY THE call for a women's strike on March 8?

THERE ARE many reasons. The first and perhaps most important reason is that the election of Donald Trump as president has unearthed a tremendous outpouring among women in opposition to his regime and agenda.

This was most palpably demonstrated on January 21, when an unprecedented outpouring of protest overwhelmed cities across the country. Where thousands were expected to demonstrate, millions of men and women clogged the streets around the country to show the deep revulsion and opposition to Trump.

The outpouring was surprising, but the sentiment of opposition and resistance was not.

Trump has breathed new life into the old insult of "sexist pig." He has been accused of sexual assault by many women; he has bragged about sexually assaulting women; he has made violent and abusive comments about women's appearance, intelligence and more. More importantly, he is pursuing a political agenda that will make ordinary women's lives harder.

January 21 showed the potential for the re-emergence of a feminist movement, but March 8 is a call for a particular kind of feminist movement. If there is a critique of the J21 action, it is about the reluctance of its organizers to embrace politics, opposition and militancy. Instead, they did not want to pose the march as being against Trump and seemed to downplay politics. 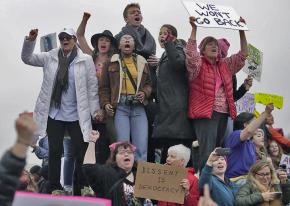 So we see March 8 as not just a call to protest the Neanderthal in the White House, but to put radical politics at the center of the resistance.

For the last several years, "lean-in feminism"--which was kind of embodied in Hillary Clinton's campaign for president--has been elevated as a goal for all women. Those who espouse its politics have made shattering glass ceilings that impede their ascent into corporate boardrooms, electoral politics and other destinations in white and wealthy America as the real objective of feminism.

We see March 8 as a reclamation project in that sense--as an effort to reconnect with the militant and radical politics of socialist feminism and Black feminism of the 1960s and 1970s, which located the oppression of women in capitalism and the free market.

For years, International Women's Day has gone unnoticed or was depoliticized. Most people no longer even know that its roots lie in the struggle of women textile workers in the U.S.--or that a mobilization of women in Russia to oppose the First World War in 1917 was the spark for an uprising that led to the overthrow of Tsar and set off the Russian Revolution.

This March 8, we are hoping that women and those who support them will join together in political actions across this country to draw attention to the conditions of working-class women's lives and the struggle needed to transform those conditions.

DO YOU see the International Women's Strike as connected to the resistance to Trump that we've already seen?

THE RESISTANCE to Trump has many fronts right now.

These struggles aren't wholly independent of each other. Black Lives Matter has largely been led by Black women, many of them queer-identified. Some of the most vocal leaders of the anti-pipeline struggle in North Dakota have been women.

In each of these struggles, the centrality of women in the leadership has helped to elevate the ways that environmental degradation and police terrorism have a disproportionate impact on women and the families they often lead.

But the demonstrations on J21 were one expression of the potential for a new feminist movement, in addition to the critically important protests in defense of Planned Parenthood on February 11. We hope that the March 8 strike can be a building block in the development of a radical, political opposition to Trump.

Our point of emphasis is that we don't need opposition for opposition's sake, but an opposition and resistance with radical politics, which won't just be steered into putting Democrats back into office in the 2018 midterm elections. The strike is about looking at the systemic roots to women's oppression in our society.

But we also have intentionally looked to connect women's oppression to many of the attacks launched by the Trump administration. What I mean is that a women's movement that does not take up a whole range of issues--racism, Islamaphobia, anti-immigrant racism and bigotry, low-wage exploitation, the relentless attacks on the remnants of the welfare state, the U.S. government's endless promulgation of war and occupation--is not really addressing the actual issues that impact working-class women and their families.

To this end, March 8 can contribute to an ongoing systemic critique of what is wrong with American society.

WHAT KIND of activities do you expect to see on March 8? What kinds of strikes will supporters be organizing?

MARCH 8 in the United States is part of an international call for a "women's strike" that now involves at least 30 countries. This call came in response to already existing women-led struggles across the world, including the women's mobilization in Poland to stop the ban on abortion and other mass protests in Ireland and South Korea for reproductive rights.

Some have been confused by the language of "strike" and whether or not it's appropriate to use this language to describe the action called for March 8. Some of this confusion or disagreement stems, I believe, from a narrow view of a "strike" as an action called by a trade union--and the belief that, given the weakened state of the U.S. labor movement, that a strike of this nature is unrealistic.

I think we would agree that a "general strike" of this sort would be inappropriate to call for--and an impossibility right now to achieve. But there is another history of a "women's strike" that is intended to call attention to the unpaid and often overlooked contributions of women's labor--what some refer to as "social reproduction."

In some ways, that's the point: Women's work--in the home especially, but in other ways that some work has been feminized--is devalued or differently valued. The removal of that labor draws attention to the important--and often unpaid, or at least undervalued and underpaid--role of women in the functioning of society.

This is especially true for Black women, Latinas and women from immigrant communities. Black women are paid 63 cents for every dollar made by a white man. Undocumented women working in agriculture and domestic work not only toil for low wages, but are under the constant threat of physical and sexual violence because of the absence of any workplace or civil protections on account of their immigration status.

These disparities manifest themselves in declining health, imprisonment, housing insecurity and a host of other destabilizing conditions.

The Women's Strike for Equality in 1970 was called by the National Organization for Women and was intended to celebrate women's suffrage, but also to draw attention to women's unpaid labor and demand women's equality, including "free abortion on demand". Thousands of women participated in the strike as an expression of the women's movement of the 1970s.

The strike has been endorsed by the organizers of the January 21 protests, and just as importantly, by the "bodega strikers" in New York City, who took action in opposition to Trump's illegal Muslim travel ban. These endorsements of March 8 build the kind of solidarity we think is crucial in organizing the anti-Trump resistance.

On our website, we list many ways that people can participate in March 8, including marches, speakouts, public forums and even wearing red where participation otherwise isn't possible.

But where possible, the point of the strike is for women to withdraw their labor, in all of its forms, for a day to highlight how critical "women's work" remains to the political economy of the United States.

WHAT DO you hope to see on March 8?

THE TURNOUT for March 8 will look different across the country.

I imagine there will be larger protests in places like New York City, Philadelphia and Washington, D.C., where there has been deeper mobilization and some ongoing organizing. But we expect that there will be actions of some sort across the country.

They will take different forms. I've heard that there will be a "women's assembly" in Geneva, New York, to discuss the material issues shaping women's lives. In Chicago, organizing has included input from the Chicago Teachers Union and other activists. In Los Angeles, there is an amazing grouping of Black feminist organizers who have been involved in the Women's Global Strike for several years.

To be honest, it's difficult to know how large March 8 will be or the range of activities that will take place. We know that on J21, there were few demands, and the bar was very low to be involved.

We intentionally put forward a political call that includes self-determination for Palestine, an unapologetic demand for access to abortion, and a demand for socialized child care. This is intended to raise politics--radical politics--in the budding women's movement.

That will have an impact on the number of people who feel like they should participate. But it will be an attraction for those looking for deeper politics than just "opposition" or "resistance."

We also see this as the beginning and not the end. There will be a tremendous amount of work to do on March 9 and beyond. The main thing will be gearing up for the May 1 protests for immigrant rights all across the country. The face of deportation thus far has been mothers ripped from their families, but also men disappeared into detention, depriving families of desperately needed resources.

These are the kind of connections we hope can be highlighted on March 8. And in turn, we hope March 8 contributes to the growing movements in this country.