Nikki Williams explains why after-school programs not only need to be protect from the Trump administration's budget-cutters, but they really need to be greatly expanded.

THE TRUMP administration wants to eliminate federal funding for after-school programs--and when White House budget chief Mick Mulvaney held a press conference to defend these cruel cuts, he focused on the snack that's provided as part of these programs.

According to Mulvaney, there's no proof that feeding children helps them perform better in school. He told reporters on March 16:

I've worked in after-school programs in both rural and inner-city areas, and I've seen firsthand how food insecurity forces children into survival mode, changing their behavior and shutting down their ability to concentrate on homework.

As summer approaches, these children become anxious and frightened at a time when they should be excited to have more sunshine and free time. Without the safety net of school, kids who aren't enrolled in a summer program don't know when they will eat again, and they begin to act out. People can't learn when they're in survival mode and terrified that a basic need will not be met. 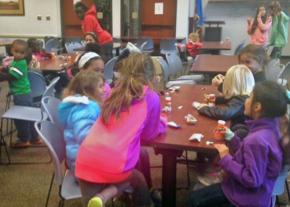 Since firsthand experience probably wouldn't be sufficient for Mulvaney, there are also numerous studies that show the devastating impact of food insecurities on children's behavior, development and their ability to learn.

The federally funded after-school program initiative called 21st Century Community Learning Centers (CCLC) has helped to fill in nutritional gaps for children after school and during winter, spring and summer breaks since the mid-1990s.

In addition to providing a snack or supper after school and during breaks, food banks in some states also use these programs as a way to distribute food to families for consumption over the weekends. Families pick up a grocery bag full of food when they pick up their children on Friday evenings.

When a government official in the richest country in the world justifies the decision to deny a basic human need to children by asserting that there's no proof that feeding them will make them do better in school or be better workers, this is an indication that we live in a very sick system.

THE FEDERAL funding for after-school programs is already insufficient in meeting the needs of people living in poverty. According to Afterschool Alliance, "more than 11 million students remain unsupervised after school. The parents of almost 20 million students would like their children to be in programs, but programs are unavailable to them, unaffordable or both."

Additionally, the food that Mulvaney wants to take away from the kids is often the same food used for free school lunches during the school day. That food is very low quality and comparable to prison food. According to a CNN report, as little as $2.74 per child is spent on their meals. Most of the food is processed and unhealthy.

The food schoolchildren are given is better than nothing, but nowhere near enough for growing minds and bodies, and it's unacceptable considering the overwhelming amount of wealth in this country. All children deserve nutritious, high-quality food.

In Mulvaney's criticism of after-school funding, he didn't mention the fact that, in addition to food, CCLC programs offer enriching programs to the 1.6 million children served nationwide.

Funding for the program is allocated to schools by each state, and in order to qualify for funding, the after-school program must serve a high level of low-income families and provide "students with activities that are targeted to their academic needs and aligned with the instruction they receive during the school day," according to the After School for America's Children Act.

They must provide a variety of enrichment programs that support learning and healthy choices. This translates into over a million children spending the hours after school participating in programs like homework help, STEM (science, technology, engineering and mathematics), art, drama, dance, nutrition and gardening.

Even with funding, CCLC programs depend upon community support and volunteers. Children build relationships with the staff and community volunteers, who teach them new skills, help them discover their talents and help them build social skills--all while ensuring that the kids are having fun.

These relationships are vital components to building the children's self-esteem and life skills.

DESPITE MULVANEY'S claims, studies show that the programs and support offered in after-school programs do help children to perform better in school.

A U.S. Department of Education report cited by Time magazine "concluded that student participation in Community Learning Centers led to improvements in achievement and behavior." In addition to growth in areas like math and literacy, attendance increases in schools when children attend after-school programs.

After-school programs offer tremendous support to parents by keeping their children safe and engaged while they work during after-school hours. The school day typically ends around 3 p.m., and relatively few parents get off work that early.

The high cost of living and stagnant minimum wage have made it necessary for most two-parent households to have two working parents, and many single parents need to work two or more jobs. After paying for basic necessities, child care is too expensive to be an option.

CCLC is the only option for many families in impoverished areas. Trump's budget proposal threatens to leave parents with no choice but to leave have their children at home unsupervised and in some cases unfed. The CCLC program is an essential resource for working-class families.

A few years ago, I worked as an educational assistant at a small school in rural Oregon. I also worked at the Boys & Girls Club next door to the school and volunteered as a drama teacher for the CCLC program.

Within one year, the school lost its CCLC grant and the Boys & Girls Club went bankrupt. With no options for after school care, many families had to uproot their children and their families and move to different schools that did offer care.

Others had to change jobs or shifts. In some ways, those were the more fortunate families. Some of the kids went home to empty houses to care for themselves or to be in the care of siblings who were only slightly older.

MULVANEY'S CALLOUS dismissal of the need for children to eat exposes the warped priorities of the system we live in. Workers are expected to work all day to produce profit for their bosses and at the same time feed and care for their families.

Under capitalism, the important task of raising children, who will become the generation of workers, is the responsibility of individual working-class families, not the bosses that will ultimately profit from their labor or even the system as a whole.

Now the Trump administration wants to chop away at the few federal programs that exist to assist working-class families with the difficult task of caring for their children.

Free child care should be a right for all families. Any humane society would prioritize the health and welfare of its children, and would do everything possible to ensure that. Until that happens, programs like CCLC are necessary to provide places for kids to go after school where they will be inspired, safe, cared-for and fed.