The Coward-in-Chief’s cruel war on migrants

Donald Trump is displaying his full cruelty, but there is also widespread opposition to his reactionary agenda that needs to be mobilized for action, writes Danny Katch.

EVERY YEAR around Easter--the day when Christians celebrate a poor Jewish carpenter from Nazareth whose message of equality and love was viewed as an intolerable threat to the oppressive order of the Roman Empire--hundreds of desperate Central American migrants band together in caravans to journey northward to escape horrific violence and poverty.

This year, the right-wing media hate machine centered at Fox News decided to create a panic about a particularly large caravan organized by Pueblo Sin Fronteras, which has helped organize these treks for over a decade.

The fearmongers portrayed the slow and difficult journey of hundreds of children, infants and their parents as a relentless march of a dark-skinned army aiming to knife through the sacred borders of the homeland.

The goal of these Fox personalities, like the fascists throughout history that they increasingly resemble, is to turn cowardice into a virtue: to make it seem not pathetic but wise for rich white men to fear poor migrant children, and for the most powerful country in the world to deploy its troops against refugees seeking to make a legal case for asylum. 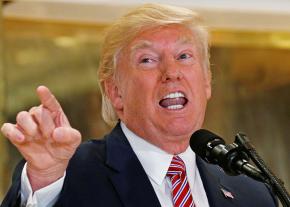 Last Sunday morning, the world learned that this latest propaganda campaign had reached its target audience of one: the Coward-in-Chief himself.

Donald Trump tweeted "Happy Easter!" and then, with no sense of irony at all, launched into a stream of tweets brimming with hate, fear and lies about the imminent threat of a migrant invasion. Here are some excerpts from the U.S. president's message to the world on Easter Sunday:

Mexico is doing very little, if not NOTHING, at stopping people from flowing into Mexico through their Southern Border, and then into the U.S. They laugh at our dumb immigration laws.

DACA is dead because the Democrats didn't care or act, and now everyone wants to get onto the DACA bandwagon...No longer works. Must build Wall and secure our borders with proper Border legislation. Democrats want No Borders, hence drugs and crime!

Border Patrol Agents (and ICE) are GREAT, but the weak Dem laws don't allow them to do their job. Act now Congress, our country is being stolen!

Clearly relishing the opportunity to make himself the general in an imaginary war against a nonexistent migrant army, Trump called a few days later for the National Guard to be deployed to the Mexican border.

AS ALWAYS with Trump, there are too many lies to rebut. On the Deferred Action for Childhood Arrivals (DACA) program, it was Trump's decision to unilaterally announce its elimination--and only agree to an extension if Congress went along with his extortionate demands for drastically intensified enforcement, including the famous border wall.

As for "Mexico is doing little, if not NOTHING," the truth is that the Mexican government--under tremendous pressure from the U.S.--has more than doubled migrant detentions and deportations since 2014. Indeed, Mexican authorities reportedly attempted to break up the current caravan, and organizers now say its journey will end in Mexico City.

Mexico's repression has made the journey from Central America highly dangerous at any time. "More often than not, undocumented travelers have to move in the darkness of night and aboard a cargo train known as "The Beast," according to the Buzzfeed website, "dodging immigration authorities and criminals who extort, rape and sometimes kidnap them."

It's these dangers that lead migrants to come together in caravans for safety. They aren't trying to storm the U.S. border. Some aren't even trying to reach the U.S. at all, and those who do plan to turn themselves in to the Border Patrol and ask for asylum, which is perfectly legal and has been for some time.

Of course, the anti-immigrant right will never let the facts get in the way of their constant efforts to blame immigrants and the Mexican government for "stealing our country" and destroying the "American Dream" for working people.

BEYOND HIS angry tweets and military threats that may or may not come to pass, Trump is using the immense power of his office every day to push forward his xenophobic agenda.

As the New York Times reported, the administration is working on a stream of anti-immigrant laws that include "toughening laws to make it more difficult to apply for or be granted asylum in the United States, stripping protections for children arriving illegally without their parents so they can be turned back at the border or quickly removed, and allowing families to be detained for longer periods while they await decisions from immigration authorities about their fates."

There is also plenty of damage that the White House can do without even waiting on the legislative branch.

Reuters reports that the Department of Homeland Security is reportedly drafting rules "making it harder for foreigners living in the United States to get permanent residency if they or their American-born children use public benefits such as food assistance"--or if they have "enrolled a child in government pre-school programs or received subsides for utility bills or health insurance premiums."

Then there was the announcement in late March from the U.S. Census Bureau that "the 2020 census will ask every American household to record which members of their family are U.S. citizens." The change was quickly challenged by a lawsuit from California and 13 other states.

Not only would a citizenship question increase the unwillingness of many immigrants to answer the census--which would affect funding and political representation for immigrant-heavy cities and states--but it also could encourage nativist forces to sign up for Census 2020 jobs in order to harass immigrant families.

In addition to these well-publicized anti-immigrant attacks, a new report from the Migration Policy Institute outlines a number of other measures, including "slowing down processing of related permanent residency (i.e. green card) applications" and exploring ways to strip naturalized immigrants of their U.S. citizenship by claiming that something in the process was fraudulent.

Finally, there are the numerous horrors being carried out every day by local ICE and Border Patrol agents who feel emboldened by the White House to do their jobs with the utmost cruelty and malice.

"One of the most egregious cases," reports Muslim-American advocacy group MPower Change, "involves 92 Somali migrants on a botched deportation flight--who endured barbaric treatment at the hands of ICE agents, including being beaten and shackled for 40 hours.

The worst part is that the flight was just the beginning of their abuse. All of the 92 are still being held in detention and continue to face racist assaults at the hands of ICE agents--not only physical abuse, but being called the n-word and told they will be sent "back to the jungle."

WHILE TRUMP has famously vacillated on any number of policies, on immigration, he's moved relentlessly forward (or backward) from Day One, a reflection of the fact that xenophobia is one of his few core values.

But another reason is that he's been able to follow a trail of migrant crackdowns that was well established by his supposedly liberal predecessor. Barack Obama famously deported more immigrants than any other president in history, but his harmful record goes much further than that.

It was the Obama administration that bullied Mexico into changing its own border policy in 2014, part of the Democrats' heartless response to an unprecedented number of unaccompanied children seeking asylum from the gang violence ravaging Honduras following a coup backed by then-Secretary of State Hillary Clinton.

And who was Obama's point person in pushing for that crackdown on Central American migrants? Gen. John Kelly, the current White House chief of staff who is known to be one of the leading anti-immigrant voices whispering in Trump's ear.

Plus, when Trump calls for the National Guard to be deployed to the southern border, he's following a precedent set by both Obama and George W. Bush--although there is certainly a danger that Trump will demand that they be used for more than the "support role" called for by his predecessors.

Trump has enormous power in leading all branches of government, but there is also widespread and passionate opposition to his anti-immigrant policies.

But that resistance is not being reflected in the national Democratic Party, from the supposedly liberal Senate leadership that caved on shutting down the government to fight for DACA to "moderates" like Montana Sen. Jon Tester, whose guest to the State of the Union was Brandon Judd, the head of the Border Patrol union and the guy whose Easter appearance on Fox News might have started this latest episode.

Liberal apologists will claim that Democrats like Tester have to pander to their red-state constituents to stay in office. But the current wave of red-state teacher rebellions show that there are plenty of people in these states who rejected the right's cruel agenda--and for those who might have accepted it in 2016, their political ideas aren't static, and they might rally to a fight if presented with one.

The teacher strikes are clarifying for people in West Virginia, Oklahoma, Kentucky and elsewhere that the real "us versus them" isn't "immigrants versus Americans," but "teachers and other working people versus oil companies that don't pay taxes and the politicians who work for them."

One question for socialists right now is how we can build on examples like the solidarity greetings from the Mexico City teachers union at a recent meeting for West Virginia strikers--to build bonds of working-class solidarity across the borders that divide us.