IN FEBRUARY 2017, New York City Mayor Bill de Blasio unveiled a bold program to protect the city’s tenants. A joint effort of the mayor’s office and the City Council, the program’s goal is to provide free lawyers for all tenants facing eviction.

Unlike criminal defendants, tenants facing eviction aren’t guaranteed a lawyer, meaning they have to face off against well-resourced landlords and their often unscrupulous attorneys. Instead, de Blasio and his allies in the City Council dedicated $155 million to helping tenants even the odds in court.

De Blasio’s plan has been greeted with enthusiasm by liberal pundits. The New York Times gushed that “[a]t a time when America’s most powerful landlord, President Trump, has threatened to put legal services for the poor on the chopping block, New York City is pointing in another direction, toward justice for those who can’t always afford to pay for it themselves.”

The idea proved so popular that other cities are following suit. Philadelphia has set aside half a million dollars to hire lawyers to stem the approximately 20,000 evictions that take place there every year. Baltimore and Washington D.C. have also created pilot programs. 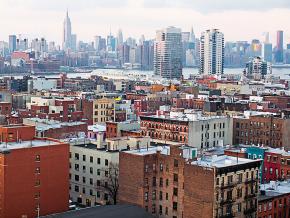 Democratic politicians at the helm of municipal governments across the country are likely paying close attention to how these initial programs play out.

There are good reasons to celebrate this development. One year into the New York City experiment, the right to counsel program has played a role in decreasing the number of evictions in the city.

This is necessary relief as New York City is in the midst of a housing crisis. Every night, more than 60,000 New Yorkers are forced to rely on the city’s decaying homeless shelters to put a roof over their heads. Despite the fact that almost half of the 60,000 are children, one of the richest cities in the world can’t manage to find them permanent homes.

Those who do find an apartment in the city’s overheated housing market are often forced to pay astronomical rents. One-third of New Yorkers pay 50 percent or more of their income towards rent, according to studies.

Furthermore, as a recent series of articles in the New York Times documented, conditions in the city’s housing court are terrible.

Tenants in housing court face impossible odds and aggressively dishonest landlords’ attorneys. The court system is more of an elaborate rubber stamp on an endless stream of evictions. No surprise, then, that tens of thousands of people are evicted every year and turn to the shelter system for housing.

While New York City real estate may be uniquely unaffordable, evictions have become a nationwide problem. Nearly a million people were evicted from their homes as a result of a court order in 2016. It is likely that many more were evicted outside the purview of the court system.

Evictions are traumatic, destructive events for working-class families, and any policy that helps tenants to avoid this is welcome.

YET AN unmistakable whiff of cynicism hangs over de Blasio’s plan. Here’s why.

De Blasio, along with most New York state Democrats, gorges healthily on donations from the real estate industry in order to finance his political ambitions. In 2017, developers and landlords were by far the largest donors to his re-election campaign.

It’s therefore not surprising that de Blasio’s plan for the redevelopment of New York City is largely in line with developer’s own desires. Tax breaks for developers, loosened regulations, broken windows policing in gentrifying neighborhoods: Policies like these are a godsend for developers — and they are hallmarks of the de Blasio administration, as of its predecessors.

The de Blasio administration hasn’t been shy about publicizing its belief that partnership with private developers is the key to solving New York City’s affordable housing crisis.

For de Blasio, the crux of the affordable housing problem is a shortage of supply. The answer is to make it easier for developers to build more housing, while insisting that some of that housing be affordable to middle- and low-income New Yorkers. Other U.S. cities have similar programs.

In practice, however, this means taller and denser, but not necessarily more affordable, buildings in underdeveloped, mostly Black and Brown neighborhoods.

The rezoning of Jerome Avenue in the Bronx serves as a case study of this form of aggressive, city-sponsored gentrification.

The Bronx is one of the last bastions of affordable housing in New York City. It’s the birthplace of hip-hop, home to a vibrant immigrant culture and filled with employment opportunities in light industry like auto repair. De Blasio’s rezoning would transform the borough, pushing out the auto shops and small businesses to make way for high-rent condos and well-capitalized boutiques.

While city-subsidized gentrification will make millions for the real estate industry, it is unlikely to be of much benefit to poor and working class New Yorkers.

WHICH BRINGS us back to the free lawyers for tenants.

De Blasio and other self-styled progressive Democrats need to stand apart from mainstream Democrats like Andrew Cuomo and right-wing maniacs like Trump. Offering free lawyers to tenants is a relatively low-cost way to do this. De Blasio may be close with the real estate industry, but he can also claim to offer a lifeline to ordinary people.

The legal program against evictions is making some difference. But it is a feeble gesture in the face of the larger changes de Blasio is ushering in.

Even if they were given immense resources, tenant advocates operating in the court system can’t fight the powerful momentum of gentrification. The economic processes that de Blasio is accommodating are simply too powerful, and the courts are ill-suited to counteract them.

Plus, tenant advocates simply don’t get immense resources, even with de Blasio’s legal program. Tenants’ attorneys in New York City are already overburdened. They handle dozens of cases at once and can’t give each tenant the time and attention they deserve.

The new funding authorized under de Blasio’s program has led to the hiring of new advocates, but nowhere near as many as would be necessary to represent all tenants facing eviction.

Ultimately, even if much more money and resources were available, there are problems that attorneys simply can’t solve.

If a tenant can’t afford her rent, there’s nothing an attorney can do to keep her in her home. Without the mobilization of much broader social forces, the power of courts and attorneys is actually quite limited. Everyone deserves their day in court, but we should be asking for so much more.

A real plan to save affordable housing would involve more than legal services to prevent some number of evictions.

Lawyers for tenants are necessary, but the real problem is that tenants find themselves in court in the first place. More often than not, they are there because of missed rental payments.

In his Pulitzer Prize-winning book Evicted, sociologist Matthew Desmond proposes a massive expansion of rental subsidies to make rent more affordable. This would definitely be helpful in New York City, but it would come with its own problems. Rental subsidies enrich landlords, can drive up rents, and would entrench the idea that housing should be provided in a private market.

Better still would be an expansion of public housing. Public housing fundamentally restructures the housing market in tenants’ favor. It drives down rents, limits landlords’ power and is subject to some level of democratic control.

Please help us out

So...how do we look? We hope you’re highly impressed with the new and improved SocialistWorker.org that we launched at the end of last month.

Help us spread the word. Sign up for daily e-mail alerts from SW to keep up with our coverage, and get your friends to, as well.

Can you spare a contribution to keep this website going and growing? Click here to donate — we appreciate anything you can give.

This is a fight that de Blasio and other similarly minded progressive Democrats are unlikely to pick. But the expansion of public housing is a demand that socialists and housing activists should raise at every opportunity.

Free lawyers for tenants is a welcome salve for the rash of evictions sweeping New York City and the nation, but it isn’t enough — not by a long shot. We should support greater advocacy for tenants, but remain aware of the limits of this proposal, which work to the benefit of pro-gentrification politicians like Bill de Blasio.