We stand with Chinese workers, not the embassy

A recent article issued by the U.S. embassy in China described the growing solidarity movement between Marxist students and workers, highlighting the efforts of the Harvard International Socialists, among other organizations. When the article was widely circulated on social media, Harvard socialists saw it as an opportunity to respond to the hypocrisy of the U.S. state and to build greater international support for Jasic workers who face repression in China. The solidarity campaign includes a global call on the Chinese government to release workers and other activists who have been arrested for union organizing and solidarity actions at Shenzhen Jasic Technology.

Here, we publish a statement from the Harvard International Socialists in response to the U.S. embassy letter calling for building genuine solidarity with students and workers fighting against repression in China.

ON DECEMBER 10, the U.S. embassy in China published an article regarding the growth of Marxist groups on U.S. campuses and their solidarity with workers’ struggles such as the recent Marriott hotel strikes. The article cited the Harvard International Socialists as an example of that growth. It is true that there is a growing socialist movement on campuses and that there is growing solidarity between student activist groups and workers struggles, and we welcome positive attention to this development. We are part of an international movement of young people who reject the status quo and look to solidarity with all those who are oppressed and exploited. 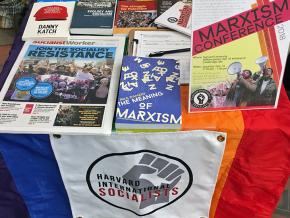 However, we are skeptical of the intentions of the U.S. embassy’s article. Far from being welcoming to socialist movements in the U.S., the U.S. government has a long history of punishing and attacking socialists, from the red scare at the beginning of the 20th century to McCarthyism in the 1950s to the imprisonment and murder of Black revolutionaries in the 1960s and 1970s under COINTELPRO. We reject the attempt of the U.S. embassy to use our movements in the U.S. for chauvinistic purposes.

We stand with Chinese students who have been under attack by the Chinese government for their solidarity with Jasic workers who have been trying to organize for better conditions. We are outraged at the way workers and students have been harassed, assaulted and detained for their efforts to fight for better working conditions and basic human rights. We encourage everyone to read more about their case and find ways to build solidarity. Solidarity between workers and students and across all borders is necessary in our struggle for a better world.