The moments of resistance during this first year of the Trump era show that we don't have to wait until 2018 or 2020 to do something about the menace in the White House.

DONALD TRUMP--having lost the 2016 election by nearly 3 million votes, but won the White House anyway through the U.S.'s undemocratic electoral system--came into office with a terrifying agenda.

His campaign combined right-wing nationalism, racism and misogyny with a reckless disregard for political convention--or even basic decency--including whipping up his supporters at rallies and encouraging them to use violence against protesters.

With Trump's arrogant projection of himself as an unstoppable force who would come into the White House, wall off the country and make America hate again, the weeks after the election this time last year were ones of protest, but also fear and trepidation.

Trump's every action and reaction during the year since he took office have shown that there was good reason for this fear--the mainstream commentators who predicted hopefully that Trump would settle down and become a conventional president were clearly wrong.

The consequences of this have been nightmarish, especially for the most vulnerable people in society. But it is worth cutting through Trump's self-aggrandizing bluster and evaluating what his administration has accomplished--and what it hasn't. 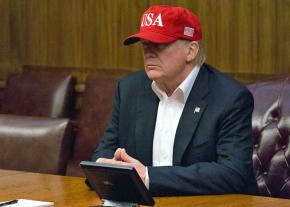 No one should downplay the damage Trump and his minions have done, even without a significant legislative accomplishment to their name, just through executive branch action and inaction, from shredding corporate regulations and legal protections for the oppressed to the intensified repression against vulnerable communities.

And the White House and the Republican Congress are still pressing for the centerpiece of the Trump agenda--a massive tax cut for corporations and the rich--before the end of the year.

But to see only this is to be paralyzed by the right-wing blitzkrieg, which is exactly what Trump and his team want. The left needs to be equally alert to the moments when the Trump White House failed--and why--in order to help prepare the resistance for more and bigger victories in the years to come.

DAY ONE is a good place to start evaluating the Trump roller-coaster ride.

The sparsely attended inauguration was followed by the largest single day of protest in U.S. history under the banner of the Women's Marches--a first crack in the armor of Trump's image as all-powerful.

After this came a bizarre moment: then-White House Press Secretary Sean Spicer, in response to photographic evidence that attendance at Trump's inauguration was embarrassingly small compared to Obama's, barked that Trump had "the largest audience to witness an inauguration, period!"

Then came the first week of scorched-earth attacks: a flurry of executive orders to revive the Keystone XL Pipeline and force through construction of the Dakota Access Pipeline against the Indigenous resistance at Standing Rock; to promise an extension of the wall on the U.S.-Mexico border and cut off federal funding for sanctuary cities; and to institute a ban on travel to the U.S. from seven majority-Muslim countries.

The week ended, however, with spontaneous and spectacular takeovers of airports across the country by thousands of people mobilizing in solidarity with the Muslim victims of Trump's travel ban. Under pressure from this upsurge, federal judges halted the ban for long stretches of time--though the Republican-packed Supreme Court eventually came through for the White House Islamophobes.

These first days established the dynamic of his presidency: Trump ordering outrageous attacks by fiat; his administration executing them ineptly, raising questions about their legality; masses of people expressing their discontent, sometimes through open protest. And then repeat: A new round of attacks as if nothing had happened.

This era of political whiplash has been frightening and disorienting. But it is also important to recognize where Trump and his administration have fallen short--sometimes far short--of what they hoped to achieve.

When Health and Human Services Secretary Tom Price resigned in September after using government money to pay for flights on private jets, he became the 14th person working in or for the White House to leave or be fired this year.

That list includes living jokes like Sean Spicer, Anthony "Front Stabber" Scaramucci and alt-right champion Steve Bannon. The administration has been far from the "well-oiled machine" that Trump claimed it to be.

While Trump has made good on a few initial campaign promises like pulling the U.S. out of the Trans-Pacific Partnership economic agreement--to the dismay of large parts of the U.S. ruling class--he has failed so far to achieve any initiatives that require the approval of Congress.

The arrogant prediction of Trump and Republican congressional leaders alike that Obamacare would be "repealed and replaced" as a first order of business collapsed over the summer. Trump hasn't secured funding to build his border wall, and proposals for rebuilding infrastructure have yet to materialize.

Congress will spend the rest of the year trying to ram through the one priority all Republicans seem to agree on: tax cuts. But as both the Senate and House bills are revealed as a naked giveaway to the super-rich and corporations at the expense of everyone else, some Republicans are peeling off, leaving the legislation in doubt.

Meanwhile, the Republicans' budget plan is filled with more cruel insults to anyone who doesn't have access to a private jet.

It's telling that the self-styled master of the "art of the deal" can't seem to pass any laws even though his party controls both houses of Congress. The truth is that Trump, like the American ruling class he comes from, prefers unaccountable powers to do whatever he wants, regardless of how big the opposition is.

NONE OF this is a justification for the kind of complacency displayed by some Democrats who hope the Trump administration will self-destruct or at least set the stage for a landslide defeat in future elections.

Trump's failure to deliver on legislation has not been matched by any hesitancy to impose his agenda autocratically through executive action. In particular, the White House has been able to move forward with a more repressive state.

The immigration cops of ICE have been unleashed to more openly terrorize immigrant communities, creating fear and suffering on a much greater scale--even though the continuity with the Obama administration's record of deporting more immigrants than any other U.S. president remains startling, and almost never discussed in the mainstream media.

With Trump's rallies celebrating law enforcement and Attorney General Jeff Sessions' undoing of the minimal federal reprimands of police departments cited for racism and violence, the administration has told the country's cops to take the gloves off. The epidemic of police murder reached a new pitch during the Obama years, but Trump has embraced racism and violence in ways that are different and more terrifying.

Trump has also escalated U.S. violence abroad from the Middle East to East Asia, with the active threats against North Korea promising still worse to come.

Another less-reported aspect of the Trump era is how right-wing officeholders and officials have seized opportunities to push through reactionary legislation at the state and local levels. Though a few of the worst bigots paid a price in the "off-off-year" elections in November, the results only highlighted how the right is pressing its agenda--more effectively, in some ways--beyond the federal government.

This is connected to perhaps the most immediately alarming development of Trump times: The far right has been emboldened to take action and incite violence.

This came to a head in August when numerous white supremacist groups came together in Charlottesville, Virginia, for a "Unite the Right" rampage that ended with the murder of an anti-racist demonstrator. Trump focused more of his attention on the anti-fascists in Charlottesville, while praising open Nazis as "good people."

Trump's sickening apologies for hate and violence helped propel the eruption of outrage at the far right. Since Charlottesville, counter-mobilizations by anti-racists have pushed the alt-right on the defensive.

Nevertheless, the reactionaries and racists are in a much stronger position than they were before Trump, and remain an immediate threat that the left must counter.

THROUGHOUT HIS first year, Trump has occupied the cellar position in the popularity ratings of U.S. presidents. In some ways, it is hard to believe his administration has accomplished as much as it has, with all its failures.

That's the result of a Democratic Party that has talked tough about Trump--most of the time, anyway--but done nothing to advance a tangible opposition to him. In September, Democratic congressional leaders Chuck Schumer and Nancy Pelosi showed the party's real colors when they proudly sat down with Trump as negotiators--with the rights of immigrants on the chopping block.

Trump's main setbacks have been a result of popular protest and his own missteps, not anything the Democrats have done. But this is because the Democrats are committed to serving corporate power and upholding the status quo, not changing it.

If nothing else, the year has shown with urgency and unparalleled clarity that the left needs to get organized and grow.

The promise and power of solidarity to trump hate has been revealed in this year's high points of resistance, from the massive Women's Marches, to the uprisings at the airports, to the grassroots rebellion against Trumpcare and more.

We need a left made up of radicals and socialists who can participate and strengthen all these moments of struggle, but also build ongoing organization and develop an independent political alternative at all times.

The overriding message from Democrats is to wait until 2018 to "get out the vote." But we know we can't wait--even with Trump's failures, his successes have made the situation intolerable.

A new generation of socialists has emerged and gotten more organized over this year. The sooner it makes good on the potential of a left alternative, the better for the majority of people in this country and around the world.