Elizabeth Schulte reports on the latest scandal at Wal-Mart--and shows that the retail giant is far from the only corporate offender when it comes to buying political influence.

But when they described the process at company management meetings, they never thought the video would end up on the Internet.

The Center for Public Integrity (CPI) unearthed the tapes and released them at the end of April, after Flagler Productions, the video production company Wal-Mart hired to film its management meetings, made the tapes public. The videos provide a seldom-seen glimpse into how corporations like Wal-Mart buy political power and influence.

According to the scheme Wal-Mart was encouraging its managers to take part in, for every dollar they gave to the Wal-Mart PAC, Wal-Mart would give two to the Associates in Critical Need Fund, a tax-exempt affiliate of the Wal-Mart Foundation that is supposed to provide support for employees or their dependents during medical or extreme hardships. 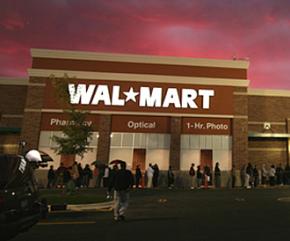 "I like to call it a two-fer," smirked company spokesperson Jay Allen during a 2001 meeting in Houston.

"Wal-Mart is not, by federal law, allowed to contribute to the Wal-Mart PAC," Wal-Mart executive Tom Coughlin tells the management audience. "You are. I am. But Wal-Mart is not." Since that time, Coughlin resigned after accusations that he misappropriated as much half a million dollars in reimbursements and the improper use of gift cards. He later pled guilty on federal charges to defrauding the company.

This isn't a new technique. Other companies offer incentives for employees who donate to their PACs, such as a donation to outside charities like the United Way. But Wal-Mart's version has a twist.

"In this case, the Wal-Mart Associates in Critical Needs Fund is a Wal-Mart-controlled foundation, which means all decisions regarding fund management and expenditures are made by Wal-Mart, not an independent organization," David Nassar, executive director of Wal-Mart Watch, pointed out in the Huffington Post.

The Center for Public Integrity's report "Wal-Mart's 'PAC mentality'" details how the world's largest retailer transformed its once-tiny political action committee into one of the nation's biggest corporate PACs.

A story on Dan Rather Reports, "Wal-Mart goes to Washington," features video of the 2001 Wal-Mart managers' meeting.

Detailed information about the amount of money corporations and industries contribute to candidates and political parties is available at the non-partisan Center for Responsive Politics.

"So, Wal-Mart gets its PAC money, and it makes itself look good to its employees with its 'generous' contributions to the Fund, which--unbeknownst to the employees--are based on PAC contributions."

In a video from a 2004 meeting in Dallas, Vice President of Corporate Affairs Betsy Reithemeyer explains that the company "determines our contribution to the trust by what salaried members of management contribute to Wal-PAC, our political action committee." In other words, if you don't donate, Wal-Mart workers in need are out of luck.

This plan sounds more like a threat than an incentive, but whatever you call it, it worked. As CPI's Bill Hogan writes, in 2001, Wal-Mart's "Responsible Government" PAC, "according to reports filed with the Federal Election Commission...counted more than 380 contributors of $200 or more. In 2002, with the incentive in place, the number of $200+ contributors to Wal-Mart's PAC zoomed to more than 1,040, and by 2004, it was up to more than 1,240."

The outrage, of course, is that the money that goes into the PAC typically goes for backing restrictions on laws that might actually benefit Wal-Mart workers, such as regulations on hours, health care and working conditions--changes that Wal-Mart fights at every pass.

Wal-Mart executive Norm Lezy explains how political influence works. "For a PAC contribution," Lezy says, "we sat and had an audience with this senator--eight of us, for an hour and a half. We covered every issue that's important to us and important to you, and let me tell you, you just get that quality time, and that's the way it works."

"The PAC is basically the cover charge for us to participate in Washington," Reithemeyer explains. "They're the cost of admission to the tables where politicians and legislators are."

THE OLD-fashioned word for it is bribery, but it's perfectly legal--and part of the day-to-day workings of Washington--for corporations to buy political influence.

With continued war and occupation on the agenda for both political parties, the weapons makers and defense contractors are hoping they can buy influence--with $929,500 in PACs from Honeywell, $807,700 from Raytheon and $701,750 from Lockheed Martin. The defense industry's is leaning toward the Democrats slightly--bucking a 10-year trend of favoring the Republicans by a 3-2 margin.

They know the investment will be worth it.