Why the numbers don’t add up

Petrino DiLeo explains why the government's official inflation statistics seem so low compared to the bite out of your pocketbook that a trip to the grocery store takes.

TURNS OUT that those high prices you've been paying aren't so high after all--at least as far as the government is concerned.

A recent post on a Business Week blog previewing the release of May's inflation data, due out today, claimed that "core" inflation has been "surprisingly subdued" over the past three months. Economists are predicting that core inflation rose 0.2 percent from April to May and experts expect core inflation in the economy to read as 2.3 percent year-over-year--very close to the Federal Reserve Bank's target of 2.0 percent.

This might come as a shock to anyone that's visited the supermarket or filled a gas tank lately.

From January to April, for example, the average price of a gallon of fuel oil nationally rose from $3.34 to $3.87, according to the Bureau of Labor Statistics, a 16 percent gain. In the past 12 months, the rise is 52 percent. 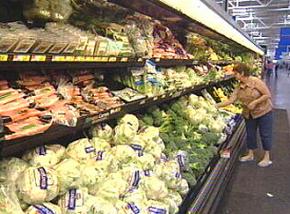 Inflation, broadly speaking, is a general increase in prices throughout an economy. There is often talk of inflation in one commodity or another. But the technical definition of inflation is a broader measure. Looked at another way, inflation means that a currency becomes devalued. When inflation takes place in the U.S., a dollar will buy you less of every kind of commodity than it did previously.

Since 2000, the Federal Reserve Bank has used the core rate as the preferred means for measuring inflation. The core rate--the full name of which is the core personal consumption expenditures price index--strips out prices of commodities that economists have deemed too "volatile" for accurate measurements, namely food and energy.

In the May issue of Harper's, author Kevin Phillips notes that Nixon administration introduced this change in the early 1970s, when food and gas prices spiked. "Core inflation could be spotlighted when the headline number was embarrassing, as it was in 1973 and 1974," Phillips wrote. "The economic commentator Barry Ritholtz has joked that core inflation is better called 'inflation ex-inflation'--i.e., inflation after the inflation has been excluded."

Once again today, food and gasoline are precisely the commodities where price increases are most severe. So despite the obvious fact that grocery bills and trips to the gas station are eating increasing chunks of workers' paychecks, the "official" rate of inflation remains "subdued."

THERE ARE other metrics of inflation beside the core rate that are still reported. The Bureau of Labor Statistics releases the consumer price index (CPI) and the purchaser price index (PPI) monthly. These are supposed to measure increases in prices for particular segments of the economy. The CPI measures what consumers are paying for goods, and the PPI measures prices paid to producers by retailers.

The problem is that both the PPI and CPI are, at some level, subjective measures. The rates of inflation for both are based on weighted "baskets of goods." The CPI, for example, is determined by measuring prices of different amounts of electricity, gas, fuel oil, white bread, ground beef, chicken, eggs, milk, apples, oranges, tomatoes, orange juice, coffee and iceberg lettuce.

By denying inflation is occurring, the Fed and the Bush administration can try to avoid intervening in the economy to try and stop it. The working class is left to suffer a fall in its standard of living, doling out more ever more money to buy everyday necessities.

If the level of inflation does finally force the Fed to act, it has several methods that it can try. One is to decrease the supply of money in an economy through intervening in markets for government bonds. Another is to raise interest rates to discourage borrowing and investment.

The problem with both of these strategies is that they also slow economic activity in general. By undertaking them, the Federal Reserve can end up provoking a recession. This is exactly what happened in the 1980s when then-Federal Reserve Chair Paul Volcker raised interest rates to their highest level in a generation to wipe out double-digit inflation.

Now, the sharp rise in oil prices and other goods has pressured the current Fed chair, Ben Bernanke, to state that the bank will raise interest rates if inflation keeps climbing. Yet given the slow crawl of the U.S. economy, such a move could trigger a nasty slump.

Whatever comes next, it's already clear, as Kevin Phillips argued, that working people are having a much harder time than the official statistics show.

"The real numbers, to most economically minded Americans, would be a face full of cold water," he wrote. "Based on the criteria in place a quarter century ago, today's U.S. unemployment rate is somewhere between 9 percent and 12 percent; the inflation rate is as high as 7 or even 10 percent; economic growth since the recession of 2001 has been mediocre, despite a huge surge in the wealth and incomes of the superrich, and we are falling back into recession."