Spreading the pain and pocketing the gain

AFTER MONTHS of wrangling, Congress finally rushed through a housing bill--legislation, its Democratic sponsors say, that will provide some relief for people whose mortgage payments have increased while the value of their homes declined.

But the real reason for the scramble to pass the long-delayed bill was a bailout for the shareholders of Fannie Mae and Freddie Mac, the so-called "government-sponsored enterprises" that own or guarantee half the mortgages in the country--some $5.1 trillion worth. According to some estimates, the rescue could cost taxpayers up to $25 billion--but given that the new law gives the Treasury Department an unlimited ability to fund Fannie and Freddie, the final bill for this rescue could run even higher.

Call it socialism, Wall Street style: Taxpayers get saddled with the risks and the costs of the bailout, while private shareholders reap the gains.

"Fannie Mae and Freddie Mac are only the most recent and extreme version of Wall Street socialism," wrote liberal commentator Robert Borosage. 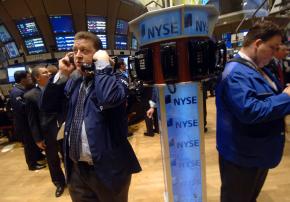 "The Federal Reserve has now traded more than $500 billion in federal bonds for the toxic paper of private banks and investment houses, some $200 billion of it in mortgage-backed securities, worth dimes on the dollar. This massive subsidy--justified as necessary to keep the banking system afloat--is not accompanied by limits on what gambles the speculators can make, how much debt they can take on, what rewards they can pocket. They are playing with house money--not exactly an incentive for prudence."

The bill does provide some aid for homeowners who owe more on their mortgages than their houses are worth. But for homeowners to actually get relief, their lenders have to agree to reduce the amount of principle owed on the loan. And since most mortgages are packaged into securities owned by investors, it's often almost impossible for homeowners to even know who to try to negotiate with.

According to the Center for Responsible Lending, the bill will provide relief for about 500,000 families. "That's not enough," the organization said in a press release. "The economy will continue to take a beating if we don't do more to stop 6.5 million foreclosures Wall Street analysts expect over the next few years."

Contrast this short shrift for homeowners to the bailout for Fannie and Freddie, which will boost the companies' stock prices, to the benefit of investors. That measure, along with the endless supply of loans from the Federal Reserve for investment banks, means that the biggest beneficiaries of the government rescue are the same Wall Street investment banks that ran the economy off a cliff in the first place.

HOW DID it happen? By pumping up the housing market with sub-prime mortgages at low teaser interest rates and packaging homeowners' debt into complex mortgage-backed securities, the big banks turned a cyclical economic downturn into the biggest world financial crisis in decades. Bad housing-related debt has already led to bank losses of an estimated $400 billion.

The result: Banks are increasingly reluctant to lend, whether to students seeking money to attend community colleges or businesses seeking new capital to expand.

"The scarcity of credit has intensified the strains on the economy by withholding capital from many companies, just as joblessness grows and consumers pull back from spending in the face of high gas prices, plummeting home values and mounting debt," the New York Times observed.

The government's response to the crisis has been emergency lending to banks and an improvised, but vast, expansion of regulatory power. Leading the charge is the supposedly pro-free market Bush administration, fronted by Treasury Secretary Henry Paulson, the former CEO of the investment bank Goldman Sachs, who just weeks ago was warning against the expansion of government regulation.

The new law gives Paulson the ability to provide an unlimited line of credit to Fannie and Freddie, much as Federal Reserve Chair Ben Bernanke is making loans available to Wall Street investment banks under an emergency program last used in the Great Depression of the 1930s.

"Financial capitalism is crashing," wrote independent presidential candidate Ralph Nader. "So the lights are on late in Washington's Federal Reserve, SEC and Treasury Department trying to figure out how socialism (your tax dollars and credits) can once again bail out these big time gamblers with our money...Reckless, self-enriching capitalists get on your knees and thank the rescuing Washington socialists, for without them, you would surely be in chains."

Despite this government rescue of the rich, things could get worse again--in a hurry. "This bill is the latest in a series of temporary fixes to the financial system--attempts to hold the thing together with bungee cords and masking tape--that have, at least so far, succeeded in staving off complete collapse," New York Times columnist Paul Krugman wrote of the legislation. "But those fixes have done nothing to resolve the system's underlying flaws. In fact, they set the stage for even bigger future disasters--unless they're followed up with fundamental reforms."

Such dire warnings--along with complaints in the business press about Wall Street socialism--underscore the way in which the declining economy is creating not only political disaster for Bush and the Republicans, but a profound ideological crisis as well.

The pro-market, or neoliberal, economic doctrine of the last 30 years, embraced by Republicans and Democrats alike, has been discredited. Working-class living standards are declining suddenly and sharply due to inflation and lost wealth through housing. And with joblessness on the rise, things will certainly get worse for workers.

ALL THIS means that working people will be more open than they have been in decades to listen to a critique of the capitalist system.

In the last two recessions--1990-91 and 2001--propaganda about the so-called "triumph of capitalism" hung on during the slump. Margaret Thatcher's notorious statement, "there is no alternative," has been accepted internationally by labor and social democratic parties as well as conservatives, since the early 1980s.

Things are very different now. According to a Time magazine/Rockefeller Foundation poll, 85 percent of respondents believe the country is on the wrong track--what Time called "an unprecedented downer from an optimistic nation."

Of those surveyed, 82 percent support public works projects to create jobs, and 70 percent favor government assistance to those facing hard times. "It is a shocking shift in sentiment, a counterreformation of sorts in a Republican-led era that emphasizes deregulation and self-reliance," a Time reporter wrote.

Yet even as the world financial system threatens to come apart at the seams and oil prices hit previously unimaginable levels, the Barack Obama presidential campaign is recycling Clinton-era neoliberal economic orthodoxy. Obama does call for high-income individuals to pay taxes at the rates that applied prior to Bush's tax cuts. But that wouldn't even put a dent in inequality, which has reached the highest levels since the 1920s.

So far, virtually no mainstream politicians have dared to call for even the most obvious government measures to help to hard-pressed workers--anti-poverty spending, government-funded job programs and a genuine national health care program. And no one in Washington is advocating longer-term measures--major investments in mass transit, conversion to renewable power or a program to rebuild crumbling public schools, for example.

Such reforms are badly needed and worth fighting for. They would improve the lives of millions of people. Yet even this wouldn't overcome the chaotic scramble for profit that is central to capitalism--and at the heart of the current economic crisis.

Which leads back to a discussion of socialism--not for Wall Street and the wealthy, but for working people. A planned economy, under the democratic control of the majority in society, is the only way to avoid the damaging effects of the capitalist cycle--booms in which the lion's share of the gains go to the rich, and slumps in which millions of people are tossed out of work and left to rot.

But now that we've entered a long-term period of economic crisis, a debate about alternatives is inevitable. It's time to make the case for socialism.