Why isn’t Obama way ahead?

Obama is seen as a champion of "change" at a moment when four out of five Americans tell pollsters the country is "on the wrong track."

IN THE week before the Democratic convention and Barack Obama's naming of Sen. Joe Biden as his running mate, the media were consumed with the question "Why isn't Obama blowing out McCain?"

A spate of national polls released in mid- to late-August showed the 2008 presidential race to be unexpectedly close, with Obama leading McCain by statistically insignificant margins of 2 to 3 percentage points. One poll, by Zogby/Reuters, even showed McCain with a 5-point lead after weeks of pounding Obama with a series of "negative" ads, including one comparing Obama to mindless celebrities Britney Spears and Paris Hilton.

The reason the media were surprised by the apparent tie in the polls was that most "objective" indicators point to an Obama win and substantial Democratic gains in the Congress and state legislatures come November.

This expectation of a Democratic sweep hasn't really changed since the earliest-ever presidential campaign got rolling in January 2007--two years before the inauguration of the next president. Since then, many indicators, from opinion poll statistics to huge voter turnouts in the primaries, have reinforced the notion of a substantial Democratic victory in November.

To be sure, the X-factor of Obama's race--and the GOP's efforts to appeal to prejudice by making Obama seem too (insert an adjective): foreign, out-of-the-mainstream, liberal, unserious, militant, naïve, uppity, scary, whatever--gives McCain a chance.

But one has only to consider the landscape that will confront the electorate in November: an opponent running as heir to the most unpopular president in polling history; four out of five Americans telling pollsters that the country is "on the wrong track"; an economy in a deep recession; the war in Iraq, championed by McCain and opposed by two-thirds of Americans.

With the exception of the Reuters/Zogby poll--which had major methodological flaws according to an analysis published by the polling watchdog Web site pollster.com, all of the major national surveys, in reality, show very little change during the month that McCain was pounding Obama. 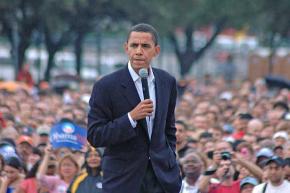 If McCain picked up a couple points, it was most likely the result of conservative voters "coming home" to the Republican Party, rather than any major shift in the dynamics of the race.

Certainly, it wasn't a move in the affirmative for McCain, who has given up on advancing a "positive" case for himself in exchange for tearing down Obama. So if this was a "good" period for McCain, one wonders if this will be his high point.

ULTIMATELY, OBAMA has the same forces working in his favor that Ronald Reagan had in 1980 and that Bill Clinton had in 1992.

In those years, recessions and/or unpopular overseas entanglements associated with the White House incumbents made Reagan's and Clinton's messages of "change" resonate in an electorate ready to "throw the bums out." While McCain isn't officially the incumbent in 2008, he has spent his entire candidacy trying to prove that he will be a loyal custodian of George W. Bush's most disastrous policies.

So the time was right in 2008 for a candidate championing "change" to fill the American political vacuum. In defeating Sen. Hillary Rodham Clinton for the Democratic nomination, Obama proved that he grasped this far more than Clinton, who initially positioned herself as the "inevitable" Democratic nominee.

Obama's candidacy is historic. As the first African American with a good chance at winning a majority of voters in a country founded on slavery, he has lifted the hopes of millions of people. An Obama win would be another piece of evidence supporting the proposition that the U.S. is a more racially tolerant and multicultural society than it has ever been.

Yet his primary campaign, which subtly played on its historic character, was much more a triumph of style over substance. His rhetoric in the Democratic primaries--crafted with the more liberal Democratic primary voter in mind--evoked images of mass movements for social change throughout U.S. history. He sought, very skillfully and consciously, to cloak himself in the mantle of legitimacy of struggles for the right to vote, the eight-hour day or civil rights for the oppressed.

But when one looked beyond his inspirational rhetoric, it was often hard to pin down exactly where he stood on crucial questions.

In fact, as Obama began to assume the position of "president-in-waiting," he made much clearer where he stands on a number of important issues, from the war in Iraq to immunity for the telecom companies who aid the Bush administration's unconstitutional spying program.

While continuing to market himself as a candidate of change, Obama has spent the summer assuring the movers and shakers of American politics that he is committed to a status quo hardly different from what we have known since at least the end of the Cold War. Thousands of his most fervent supporters have expressed their disgust with Obama's moves.

So in that sense, Obama--who, we should remember, has been running for president for 18 months--may be suffering from some second thoughts among people who supported him in the Democratic primaries.

Nevertheless, we shouldn't lose sight of the bigger picture. Not only does Obama have the terrible economy, Bush "fatigue" (if not outright "contempt") and an unraveling Republican Party working in his favor, he has the votes of the people who really decide who wins in American elections, the corporate elite.

Throughout the primary season, Obama and Clinton regularly raised more money than any single Republican candidate. As of June 30, Obama had raised a total of $339 million in the 2008 election cycle, compared to McCain's $145 million. And Obama held a 2-to-1 advantage over McCain in "cash on hand."

Of the 13 leading industrial sectors whose political contributions are tracked by the Center for Responsive Politics, the Republicans led the Democrats in only three sectors (agribusiness, energy and construction). Even the corporate doyen of neoliberal economics, Wal-Mart, has shifted its contributions from almost 95 percent for Republicans to a near-50/50 split between the parties, the Wall Street Journal reported.

This huge monetary advantage means that even as the pundits chatter about Obama's underperformance, his campaign is methodically organizing in many more states than McCain can. McCain may not even be able to sustain his current level of advertising.

Obama's huge war chest gives him the upper hand for the fall--but its funders know that the "change" Obama represents won't disturb them.