The road to ruin

Petrino DiLeo looks at how politicians of both parties allowed an unregulated shadow banking system to take shape.

IT'S UNTHINKABLE. The United States--the paragon of the "free market" and loudest proponent of neoliberal policies such as free trade, deregulation and privatization--has just carried out the three largest nationalizations in world history in taking over the twin mortgage behemoths Fannie Mae and Freddie Mac, and now the insurance giant AIG.

The U.S. government is now the largest guarantor of mortgages in the world--and the largest insurance company as well.

The events that have caused the worst financial crisis since the Great Depression are the logical conclusion of policies and legislation implemented during the past 30 years. Lax standards and weakening of regulation led to a free-for-all in the financial world and the creation of a multitrillion-dollar "shadow banking system." 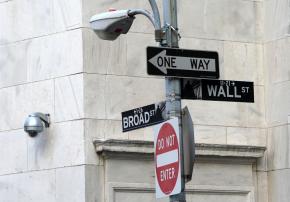 These investment products were sloppily hashed together, barely monitored and never stress-tested. Rating agencies rubber-stamped everything that Wall Street concocted. And the result is the unfolding financial bloodbath.

"What we are witnessing is essentially the breakdown of our modern-day banking system, a complex of leveraged lending [that is] so hard to understand," Bill Gross, head of the Pimco asset management group wrote, in December of last year. "Colleagues call it the 'shadow banking system' because it has lain hidden for years, untouched by regulation, yet free to magically and mystically create and then package sub-prime loans in [ways] that only Wall Street wizards could explain."

Of course, the real tragedy isn't that Wall Street is falling. The banks and other financial institutions like AIG gorged themselves for years. Whatever happens, the titans of finance will remain millionaires many times over. Few, if any, will face jail time.

The real issue is that the collapse on Wall Street is wreaking havoc on lives around the country and around the world.

People who had no idea that their mortgages were part of Wall Street's slice-and-dice game are paying the price. Workers whose pensions ended up invested in toxic bonds may not be able to retire. Cities and states face a drying up of revenue and are cutting back on jobs and services. And the federal government--using taxpayer money--is swallowing Wall Street's losses, while leaving the same people in a position to profit when the crisis is defused.

HOW DID it come to this?

After the financial crisis that contributed to the Great Depression of the 1930s, Congress enacted laws such as the Glass-Steagall Act of 1933 to separate commercial banks from investment banks.

The objective of this reform was to insulate risky deal-making by investment banks from individuals' deposits in commercial banks. The Federal Reserve Bank, the Office of the Comptroller of the Currency and state regulators all were charged with monitoring commercial banks. The Securities and Exchange Commission was given purview over monitoring the large investment banks and brokerage houses.

The traditional commercial banking model was of deposit-taking institutions, which lent money back out as mortgage loans or other forms of credit. Such banks were monitored and regulated, and had to have a certain amount of capital on hand at all times.

Furthermore, deposits up to a certain dollar value were guaranteed by the Federal Deposit Insurance Corporation (FDIC). Commercial banks were allowed to borrow directly from the Federal Reserve Bank to ensure their continued operation--a privilege that was only extended to investment banks during the current crisis.

This banking model held for many years. The long economic boom after the Second World War kept financiers pretty happy. Furthermore, the prosperity helped keep in place an overall approach to economics that tolerated government intervention into the economy. This approach was known as Keynesianism, after the liberal British economist John Maynard Keynes.

Crises in the 1970s, however, led to a revival of calls for unregulated free markets. By the 1980s and 1990s, as part of neoliberal restructuring, financial regulation came under attack. This culminated in the Gramm-Leach-Bliley Act, signed into law by Bill Clinton in 1999, which essentially repealed Glass-Steagall.

The Gramm in the law's title is former Republican Sen. Phil Gramm, now an executive at the UBS bank and John McCain's top economic advisor. But a key lobbyist for the law was Robert Rubin, the Citigroup executive and former Treasury Secretary under Democratic President Bill Clinton.

The Gramm-Leach-Bliley Act allowed banks, brokerage firms and insurers to merge once again. It also dissolved the wall between commercial banks and investment banks.

In 2000, Congress passed legislation (again, supported by Gramm) called the Commodity Futures Modernization Act, which effectively helped keep the commodities market hidden and unregulated. This law is one reason why, during the run-up in food and oil futures prices earlier this year, no one was quite sure how big a role speculators played in pumping up prices.

The Federal Reserve is technically not part of the government. Its policies and decisions on the setting of interest rates were dictated by financial interests, particularly under former Federal Reserve Chair Alan Greenspan.

Meanwhile, as part of the employers' offensive, workers' wages and benefits came under attack. This facilitated a transfer of wealth from the bottom of society to the top and helped restore profitability across Corporate America.

However, in order to maintain high levels of consumption within the U.S. economy, something needed to replace wages. An explosion of household debt was the result. The vast increase in debt helped workers maintain their standard of living, despite stagnating or declining wages. At the same time, debt became a huge profit vehicle for Wall Street.

THE SHADOW banking system is a result of all of these policies.

As one example, investment banks offer "money market accounts," which in practice look and act like traditional checking and savings accounts. But there's one important difference--not one cent of the deposits is guaranteed by the government through the FDIC. If these investment banks go down, so do the accounts.

This is a major reason why, when institutions like Lehman Brothers and Bear Stearns appeared to be failing, there have been massive runs by any funds that had money in those banks. They sought to pull out before the institutions failed.

Another phenomenon that emerged is called debt securitization. Banks bought up different forms of debt--like mortgages. Yet rather than simply hold them on their balance sheets and collect payments, they created enormous pools of loans. They then created bonds based on these massive pools of debt, and sold them to giant investors, at varying levels of risk. The highest-rated and least-risky bonds paid off at lower rates, while the riskier bonds--such as ones tied to sub-prime loans--paid off at higher rates.

By the end of the first three months of 2007, the total value of all outstanding securitized debt was $28 trillion--more than double the figure of 10 years ago. None of this would have been possible without deregulation.

The other components of the financial system that could be in trouble include hedge funds, with $1.8 trillion in assets; the $2.5 trillion overnight loan market, known as the repurchase, or repo, market; and the commercial paper market--loans made to businesses without the backing of collateral--worth $2.2 trillion.

Then there are derivatives--financial instruments based on an underlying security such as a commodity, bond or currency, but typically representing some kind of gamble about what direction the value of the security would go in. The theoretical value of all derivatives was a mind-boggling $596 trillion by the end of 2007.

On top of all this, the banks did all sorts of things to keep their shady investment instruments hidden away, off company balance sheets. As a result, no one knows how much damage could be done if these trillions of dollars in paper assets have to be sold off at pennies on the dollar--or become completely worthless. Fear of such a worldwide financial meltdown drove the U.S. government to engineer the takeover of Bear Stearns by JPMorgan Chase earlier this year.

The various components of the shadow banking system play off each other. Hedge funds put their money in investment banks, or hire the banks to place their investments. Commercial banks and investment banks have merged. Investment banks operate their own hedge funds. Banks use the "repo" market and commercial paper to fund day-to-day operations. Financial institutions of all kinds have derivative contracts. Many of these are so-called credit default swaps, a form of insurance on bonds.

The whole system is based on the free flow of capital at all times. But today, many parts of the shadow banking system aren't functioning, because the banks aren't sure if the other banks they're trading with will be around tomorrow.

The credit-default swap market, worth an estimated $62 trillion, is a particularly urgent problem. Because it's totally unregulated, no one knows which financial institutions will have to pay out how many billions of dollars of insurance on mortgage-backed securities gone bad--or whether they will have the money to do so.

It was this uncertainty that led to the government takeover of AIG, which was a major provider of credit default swaps, and thus extremely vulnerable to the collapse in the value of mortgage-backed securities.

This shadow banking system flourished under the non-watchful eye of Alan Greenspan's Federal Reserve. Today, it's become clear that Greenspan was warned repeatedly about many of the factors that led to this catastrophe, but instead, cheered on the boom.

For example, Greenspan embraced the explosion of predatory sub-prime lending. He applauded the emergence of securitization of mortgages. He cheered on the technology stock bubble. He helped goad asset-price bubbles with aggressive cuts in interest rates in the late 1990s and after September 11, 2001. Greenspan also orchestrated an industry bailout of the hedge fund Long Term Capital Management in 1998--the godfather to today's bailouts.

It's impossible to predict how far the financial chaos will spread, or just what the toll will be on the underlying economy.

But three things are clear already. The resulting credit crunch will cause an already struggling economy to contract even further. The Wall Street titans who presided over this disaster will remain personally very comfortable. And workers will be asked--as always--to suffer the consequences.