Adam Turl looks at how the economic crisis is having a harsh impact far beyond Wall Street.

COMING AMID Wall Street's spectacular financial meltdown, the late summer spike in unemployment around the country--reaching near 20-year highs in some places--was relegated to back-page news.

In August, there was a net loss of 33,000 private-sector jobs nationwide--and expectations for September employment numbers, due out today, certainly weren't more optimistic.

The August job loss was led by a decline of 78,000 manufacturing jobs--despite an increase in U.S. manufacturing exports caused by the decline of the dollar relative to other currencies. National unemployment rose to 6.1 percent in August--compared to 4.7 percent a year ago--and several states and cities reported 15- to 20-year highs in jobless rates.

Even if the proposed $700 billion bailout for Wall Street banks goes through, unemployment will continue to rise. As Barron's put it, "Bank capital will likely remain scarce, businesses will find it tougher to get financing at the same time that demand for their wares fades, and consumers are coming under the twin pressures of rising unemployment and falling wages, just as their net worths are declining and their ability to borrow is being crimped." 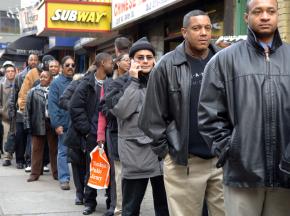 In other words, even if financial markets are stabilized, the "real economy" is already choking and gasping for air. Workers--already hard hit by lower wages, housing depreciation and foreclosures, and rising food and fuel costs--simply can't make ends meet. In these circumstances, losing a job can be disastrous for workers and their families.

Many more workers will soon join the rolls of the unemployed. Big companies--with 500 or more workers--are leading the way in slashing jobs. Employment in services has barely kept even, owing to the fading results of last spring's economic stimulus package. The only sector of the economy with consistent employment growth has been health care.

BAD AS the jobs picture is, it's much worse when you look at key manufacturing states. In Illinois, for example, the state jobless rate jumped to 7.3 percent in August--from 5.2 percent a year earlier. According to Crain's Chicago Business, Illinois has its highest unemployment rate since 1993--and the largest number of people out of work since 1992.

The Chicago-area jobless rate has already hit 7.5 percent. Seven Illinois cities have reached their highest unemployment levels in 18 years--not only rust-belt towns like Kankakee and East St. Louis, but also college towns like Champaign-Urbana and Bloomington-Normal. In blue-collar Rockford and Joliet, 9 percent of workers are unemployed.

Several other major states have equally miserable--or even worse--labor markets. As of September, Indiana's joblessness rate hit 6.4 percent in August, the highest figure since 1987. Rhode Island--which has been in recession for a year, and is facing a state budget crisis--saw unemployment hit a 15-year high of 8.5 percent. In South Carolina, unemployment also reached a 15-year high of 7.6 percent. Michigan's joblessness rate is now at 8.5 percent.

And these grim statistics actually undercount the true number of unemployed workers. Official figures don't include people who've given up looking for employment, or workers who have "settled" for lower-paying part-time jobs.

Racism means that the unemployment rate is quickly reaching crisis levels among some groups. Black male joblessness reached 11.3 percent in July, up from 7.9 percent a year earlier.

New jobs are getting much harder to find. In Marshall, Ill., Brandon Jackson talked to local reporters about the layoff of a close friend--who also happened to be a new father--at the local TRW auto parts plant. As Jackson pointed out, "It's going to be really hard for my friend to make money or to find another job. TRW is pretty much firing everybody out there."

What's more, time spent on the unemployment rolls are getting longer. On Labor Day, the Chicago Sun-Times reported that the average time it takes to find a new job after being laid off had already increased, and that those who do find another job were already taking significant pay cuts. The percentage of unemployed workers who took 27 weeks or longer to find work grew 28 percent in the past year.

Among Illinois workers who lost jobs in 2007, only 66 percent were working again in 2008. Those who found work were making an average of 13 percent less than in their previous job.

For example, the Sun-Times reported on the case of Cassandra Reeza--who was laid off from her job at giftware manufacturer Enesco in the Chicago suburb of Elk Grove. It took her nine months to find a new job--at 15 percent less pay.

All this means that pessimism about their job prospects is--rightly--growing among workers. According to one business study, 58 percent of workers believe that there are fewer jobs available than in the recent past--and they're correct. Thus, it shouldn't be surprising that many unemployed workers are officially considered to be "discouraged," and therefore aren't counted in the main unemployment figures.

IT GETS worse. Workers who lose their jobs will find that unemployment benefits don't come close to making ends meet. Unemployment benefits, which are a combined state and federal program, are based on how long an employee has worked, as well as a fraction of the highest salary that worker made in a single quarter of the previous fiscal year.

For example, the most that unemployed Californians can hope to get is $450 a week--and most get less. Benefits are calculated as half of weekly wages, but only up to a cap of $450. Benefits generally last for just 26 weeks. The benefits don't include health care--so workers have to apply for expensive insurance coverage extensions under the COBRA program, or for Medicaid if their incomes are low enough to qualify.

And California is not alone in restricting access to the program. Other states and employers have found a number of ways to reduce the number of workers eligible for benefits. If workers have worked for less than a year, they generally don't qualify. If an employer can "prove" a worker committed a "serious error," they will not qualify for benefits. (Imagine if this rule was applied to Wall Street banks seeking federal money.)

Then there are the millions of jobless workers who don't qualify at all. Neoliberal deregulation and the creation of a "flexible labor market" have re-jigged dozens of work categories so that jobs that would clearly qualify for unemployment benefits in the past no longer do, because the workers are considered independent contractors rather than employees.

Finally, union-busting means that many workers who do qualify for benefits aren't aware of their right to receive them.

And in Illinois--to add insult to injury--thousands of workers who did qualify for unemployment benefits have failed to get their checks. Some 3,600 unemployment checks were delayed in September, and 1,200 went missing in July.

In a pinch, states are able to borrow from the federal government (with interest) to cover the gap in funds. But in order to pay the loans back in the required time, budget cuts are likely to follow.

Allen Larson, director of unemployment insurance for the South Carolina Employment Security Commission, told reporters, "It's going to be very, very close as to whether or not we go broke by the end of this year...We will definitely become insolvent in the first quarter."

South Carolina isn't alone. According to Larson, 35 other states are in the same predicament. The New York-based National Employment Law Project (NELP) estimates that 18 states will be unable to maintain solvent unemployment funds during a recession. NELP ranks New York, Ohio, Michigan and Missouri with the highest risk of insolvency. New York's evident response to this was to announce a crackdown on unemployment "fraud." As of August, Michigan already had $225.3 million in outstanding loans from the federal government.

California's unemployment fund is also running out of cash--as statewide joblessness hit a 12-year high of 7.3 percent in August. About $662 million--in July alone--was paid out to jobless Californians. By the close of 2009, the state unemployment fund is expected to run a $1.6 billion deficit. By 2010--in a severe recession--the shortfall could reach $3.5 billion.

According to the Associated Press, California also has the biggest backlog of pending unemployment appeals--filled by workers who have been denied coverage--and the third-slowest pace nationally of processing those cases. In July, California had 43,230 appeals pending. This means countless workers who should qualify for unemployment insurance are unable to get funds when they need it.

The situation for the jobless in California could get a lot worse. Failure to meet federal requirements of timely appeals processing could lead to the state being cut off from federal unemployment assistance altogether, thereby punishing unemployed workers all the more.

The crisis in unemployment funding is another offshoot of the general crisis of neoliberalism. With the bipartisan drive to slash government spending and corporate taxes--and undermine social programs--the funding of state unemployment insurance was, more often that not, gutted.

As Emily Clayton of the California Labor Federation pointed out to the Associated Press, California employers only pay taxes for unemployment insurance on the first $7,000 of an employee's wages. "In 1983, that $7,000 represented about a third of the average wage," she said. Due to inflation, it now "represents about an eighth of the average wage."

In other words, since real wages have not increased, the amount of money per worker for unemployment insurance is less than half what it was during the double-digit unemployment of the early 1980s.

So while there will almost certainly be hundreds of billions of dollars to bail out Wall Street, nobody in Congress (so far) seems to be talking about bailing out the increasingly insolvent state unemployment insurance funds--leaving millions of people to fall that much further behind every single day.