Elizabeth Schulte examines the reality behind the rhetoric about the American two-party system.

DURING THE last presidential debate, John McCain fired off a desperate last-minute accusation about forces "on the verge of maybe perpetrating one of the greatest frauds in voter history...maybe destroying the fabric of democracy."

His claim was that the anti-poverty organization Association of Community Organizations for Reform Now (ACORN) was trying to fix the election for Barack Obama by turning in fraudulent registrations. The charge didn't seem to have any grounding in fact--since ACORN itself pointed out the questionable registrations to election officials.

The Republican complaints about ACORN make a mockery of the very real stories of disenfranchisement in the U.S.--most notoriously, hundreds of thousands of African American voters in Florida, who were struck from the rolls in 2000, assuring George Bush's theft of the White House.

The fact that ACORN pays workers to go out and sign people up to vote--mostly in poor and minority neighborhoods--raises another problem. Why, if the right to vote is so important to the fabric of U.S. democracy, doesn't the government make its own effort to register the disenfranchised? 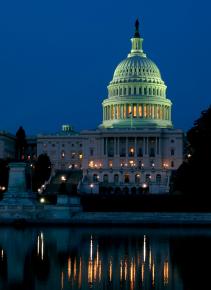 The truth is that even when no one is stealing a vote or intimidating a voter, American elections are far from democratic.

TAKE THE way the president is actually chosen. The president isn't elected by popular vote, but by the Electoral College. Each state has electors based on their number of senators and representatives in Congress--which means every state gets at least three electors (for the two senators plus at least one member of the House of Representatives), no matter how many people live there. Because of this, states with small--and usually rural and overwhelmingly white--populations are overrepresented in the presidential election.

There are only two political parties in the U.S. that get a real hearing at election time. There have been times in U.S. histories when third parties threatened to shake up the two-party system--such as the 1930s, when there was sentiment for a labor party to represent workers--but these initiatives were almost always smothered.

Thus, third parties are kept out of most debates by rules and regulations written by the mainstream establishment, they are forced to jump through often insurmountable hoops to even appear on the ballot, and they are shut out of the media.

Lance Selfa's The Democrats: A Critical History examines the two-party system in the U.S. and focuses on a socialist analysis of the Democratic Party. Alan Maass' The Case for Socialism also presents the socialist argument about how politics today.

For more information on the amount of money that corporations and industries contribute to candidates and political parties, go to the non-partisan Center for Responsive Politics Web site.

To learn about the social struggles that have shaped U.S. history, Sharon Smith's Subterranean Fire: A History of Working-Class Radicalism in the United States is an excellent history of the working class movement.

On the Seattle General Strike of 1919, Jeremy Brecher's survey of U.S. labor history Strike! is the place to start. Harvey O'Connor's memoir of the general strike, Revolution in Seattle is out of print, but soon to be republished by Haymarket Books.

The Democrats and the Republicans, while they tout their differences during the election season, fundamentally represent the same interests--those few at the top of society who control the wealth.

So while the majority of people are supposed to believe that they are voting for a certain set of ideas or political positions represented by their party's candidate, the reality is that the job of politicians, first and foremost, is to make sure that the interests of Corporate America are protected.

The U.S. calls itself the "world greatest democracy." But there's no real evidence to back up this claim. As Lance Selfa notes in his book The Democrats: A Critical History:

Although the Democratic Party is one of the longest-existing mainstream parties in the world, it doesn't really compare to many of the world's political parties on the most basic levels. It has no fixed membership or membership requirements...The party has no stated set of principles or programs...

As party conventions have developed into little more than trade shows rolling out that year's model (the presidential candidate), the party platform is usually synonymous with the candidate's talking points. In any event, the Democratic Party candidates--from the presidency to the city council--are free to follow or to ignore the party platform in their election drives...

The standard picture of a political party handed down to us from civics and political science classes is one of a collective body that people organize to get collectively from government what they can't get as individuals. The political party in a democracy represents the citizens who indicate their preferences about what they want from government when they vote to put the party's candidates in office. And yet it's clear that the oversimplified model does not reflect reality.

A case in point, Selfa writes, is the overwhelming Democratic Party victory in 2006 congressional elections--which was mostly the result of voters' opposition to the Iraq war and their determination to throw out the pro-war Republicans. Despite this, the Democrats didn't lift a finger to end the war after taking control of Congress; rather, they continued to fund it.

This undemocratic democracy isn't relegated to the U.S. It exists the world over in different forms. This is because at the heart of bourgeois democracy is the illusion that elected officials make decisions based on the best interests of the people who vote them into office.

It is not simply that politicians are bought and paid for by particular wealthy people or industries--though they are corrupted by the system of campaign contributions. Beyond this, politicians are part of a state machine whose job is to preserve the status quo.

Like the cop and the judge, the elected official ensures that the basic class relationship prevailing in society doesn't change--that a tiny minority controls all the wealth that is produced by the vast majority, the working class. The state poses as a neutral body, but as Karl Marx and Frederick Engels put it in the Communist Manifesto, "The executive of the modern state is but a committee for managing the common affairs of the whole bourgeoisie."

There are also many crucial decisions about the direction of society that aren't made through the ballot box. Voters don't decide what is a fair wage, or whether they have health insurance, or whether their working conditions are too dangerous. The majority of the population sure didn't have a say about the $700 billion bailout for Wall Street or the future of families hit by foreclosure.

But this doesn't mean we're powerless to make change. The actions of ordinary people have achieved extraordinary things--the abolition of slavery, the end of Jim Crow segregation, the eight-hour day--because those people organized themselves and fought for what they wanted and needed.

THERE IS a rich though hidden history of times when workers created the conditions in which a real democracy could take place, where workers took power and began making decisions about how to organize society in their own interests. There are examples across the globe--from Russia 1917 to Iran 1979--and even in the U.S.

In 1919, workers shut down Seattle in a general strike organized in solidarity with 35,000 longshore workers who had walked off the job for better pay. Many of the workers drew their confidence from the revolution in Russia two years before.

In order to ensure that the strike was successful, workers had to form a strike committee, which was elected out of the more than 100 striking locals in the city. In their meetings, they discussed how the strike would be carried forward, but also how essential services would be organized.

Seattle provides a glimpse of what workers' democracy could look like. Workers took charge in the factories and workplaces, and began making decisions about how resources would be distributed. When employers refused to open dairies, the milkmen designed their own distribution service. A commissary department fed some 30,000 meals a day to strikers and the community.

As Jeremy Brecher describes in the book Strike!:

Garbage wagon drivers agreed to collect wet garbage that would create a health hazard, but not paper and ashes. Fireman agreed to stay on the job to handle emergencies...

Employers and government officials, as well as strikers came before the strike committee to request exemptions. According to one correspondent, "The extent to which the city recognized the actual rather than the titular government of the community is apparent to anyone who has read the record of the strike committee, and observes what was actually done. Before the committee...appeared a long succession of businessmen, city officials and the mayor himself, not to threaten or bully, but to discuss the situation and ask the approval of the committee for this or that step."

The sight of workers making day-to-day decisions about the workings of society and conducting debates about what way forward in the struggle flew in the face of the lies we're told--that only the "experts" can lead.

The general strike ended in five days--but not before Seattle showed that workers' power was possible, even in the so-called "world's greatest democracy."