The new shape of American politics

Now the issue is how Obama and the Democrats will use their power.

Now come the hard questions--challenges greater than any president has faced since the Second World War.

What economic policies will Obama pursue as the worst financial crisis since the 1930s drives the world deep into recession? Will the man who made his mark as an opponent of the Iraq war make good on his promise to pull out U.S. troops? Will there be the kind of fundamental change that his supporters so clearly want?

For now, Obama's supporters are, justly, celebrating. Born in 1961--a time when racial segregation was the law of the South, civil rights workers were lynched, and police dogs and firehoses were used against Black children--Obama's rise is emblematic of how much has changed in the U.S., even in a country still disfigured by vicious racism that puts more Black men in prison than in college.

Anyone opposed to racism couldn't fail to be moved by the sight of Chicago's Grant Park on Election Night, where a multiracial crowd of 250,000 mixed joyously and celebrated the prospect of change. Entire families turned out to hear Obama's victory speech; union workers clutched pro-Obama signs; large numbers of immigrants without the right to vote came to the rally, too. 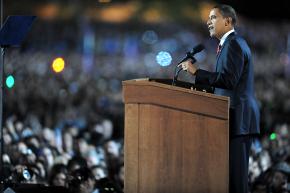 The spirit of the night was captured by groups of Black and white youths--many not yet old enough to vote--who traded chants of "O-ba-ma! O-ba-ma!" across Michigan Avenue, the main street in one of the most segregated cities in the U.S.

"What does it mean to me to have an African American elected president? I can't even put it into words," said Darrel Washington, a Black teacher in Chicago's elementary schools.

OBAMA'S VICTORY was rooted not only in popular revulsion against George W. Bush, but in the sense among his Democratic base that the old ways of politics had to go.

During the primary campaign, Obama inspired young activists with his allusions to social movements of the past--from the sit-down strikers of the 1930s to the civil rights activists of the 1960s--and declared his own campaign to be such a movement.

Obama's grassroots organizers set up Obama's primary victory in Iowa and eventually overwhelmed the well-funded machine of Hillary Clinton, which had viewed the primaries as simply a formality. Obama prevailed even after a desperate Hillary Clinton turned to racist pandering, declaring herself to be the candidate of "hard-working Americans, white Americans."

Even after Obama clinched the nomination, the mainstream media pushed this idea: that white workers--Joe Sixpack, Joe the Plumber, whatever--were too racist to support an African American.

Then John McCain took advantage of the ground plowed by Clinton. By whipping up fears about Obama's alleged Muslim background, his "elitism" and his supposed ties to ex-radicals, Republicans repeated the tactics they first used in 1968--trying to create a right-wing white backlash that enabled them to dominate Washington for most of the four decades since then.

But Election Day showed a very different pattern. Exit polls showed that a majority of voters--both Blacks and whites--held McCain's smear campaigns against the Republicans.

NOW THE issue is how Obama and the Democrats will use their power in Washington, particularly on the issues most important to voters--the economy and also the U.S. occupations of Iraq and Afghanistan.

A closer look at Obama's stated policy positions--as opposed to his soaring rhetoric--points to a big gap between the hopes and expectations of Obama voters and the cautious, moderate program he has put forward.

Obama is, after all, a mainstream politician. For all his ability to galvanize working people and youth to get out the vote, his campaign relied on huge amounts of money from corporate donors, allowing him to spend an estimated $650 million, by far the most in U.S. history. To tap those funds, Obama, the former community organizer, abandoned the public financing system that was established to counteract the role of big money in politics.

With the business support came a steady moderation of Obama's positions, particularly after he took the lead in the primary contest with Hillary Clinton. While Obama occasionally tossed out progressive positions--such as calling for increases in the minimum wage to be automatically tied to a rise in inflation--he is far from the "socialist" conjured up by McCain's operatives.

Rather than implement a major redistribution of the wealth, he simply wants to let Bush's tax cuts expire and increase the top income tax rate from 35 to 39.6 percent. But as Chuck Collins of the Institute for Policy Studies points out, Obama's proposal is far friendlier to the rich than those of the 1950s Republican president, Dwight Eisenhower:

In 1955, for instance, America's 400 highest-income taxpayers averaged about $12 million in income, in today's dollars. They paid, after loopholes, 51.2 percent of that in tax.

Let's put these numbers in contemporary perspective. In 2005, our 400 richest taxpayers averaged $214 million and paid federal taxes on that princely sum, after exploiting loopholes, at a mere 18.5 percent rate...Ike, were he around today, might even chide the target of McCain's anti-redistributionist fury, Sen. Barack Obama, for taking too timid a tax-the-rich stance.

An even more urgent issue than taxes is the bailout of the financial system, as Bush's Treasury Secretary, Henry Paulson starts rushing to hand out $700 billion to banks and financial institutions before Obama takes office on January 20. This "rescue" is, in fact, the greatest single transfer of wealth from workers to the rich in U.S. history.

Will Obama call a halt to this colossal rip-off and fashion an economic program that puts the interests of working people at its center? Will an Obama administration use government ownership of Fannie Mae and Freddie Mac and shares in big banks in order to halt mortgage foreclosures? Will there be an economic stimulus program that creates secure, long-term jobs?

The same "realism" dominates Obama's foreign policy team. Attacked by both Hillary Clinton and John McCain for his inexperience in foreign policy, Obama surrounded himself with former secretaries of state, ex-CIA officials, generals and academics committed to an imperialist U.S. foreign policy. The style will change--more cultivation of allies, more international agreements--but the substance will not.

Obama plans to leave tens of thousands of U.S. troops in Iraq to ensure that a pro-American government survives. And as he stressed repeatedly on the campaign trail, Obama wants to escalate the savage war in Afghanistan, where the pursuit of Osama bin Laden masks what is really a U.S. determination to occupy a strategic crossroads in Asia. Also, Obama has staked out hawkish positions on Venezuela and was even to the right of the Bush administration in declaring his support for Israel.

None of this is to say that no change is possible. Tens of millions of people want a new direction. The question is whether they can be organized to fight for it.

Take, for example, the proposed Employee Free Choice Act (EFCA), which would do away with much of the pro-business labor law and make it easier for workers to join a union. Obama has promised to sign such legislation if it reaches his desk, but Republicans and conservative Democrats in Congress are already being showered with money by business lobbyists determined to kill the bill--just as they did in 1994 when a legislation banning the permanent replacement of strikers died in a Democratic Congress.

Today, however, the chances of passing EFCA are much greater, given the sentiment for change, the scale of the economic crisis and the loss of credibility by big business.

The same dynamic exists in relation to the wars in Iraq and Afghanistan. Those who took Obama at his word about a pullout of troops will be disappointed if such action isn't forthcoming--and many of those who saw the Afghanistan war as a necessary evil will be open to questioning what will increasingly show itself to be a war of imperial conquest. In this context, it is possible to rebuild the antiwar movement on a stronger basis.

Given the multiple crises that beset the U.S., change is coming--but what kind, and in whose interest, depends on whether and how working people get organized to fight for it.