A bailout for the auto industry?

Lee Sustar looks at the automakers' demands for a taxpayer bailout--and what working people should demand in return.

THE BUSH administration's Wall Street bailout may be a prelude to a sweeping government intervention in the auto industry--even before Barack Obama takes office January 20.

And if the government does step in to rescue General Motors, Chrysler and Ford--a move backed by top congressional Democrats--it will raise pressure on Obama to offer government aid to more big companies threatened with bankruptcy and underwrite the restructuring of entire industries.

Already, Rahm Emanuel, Obama's pick to be his chief of staff, has joined Senate Majority Leader Henry Reid and House Speaker Nancy Pelosi in calling for government aid to the auto industry.

But if the companies get government loans or other assistance, what happens to workers' jobs, pay and benefits? Will, for example, the government finance a proposed merger of GM and Chrysler that could eliminate 40,000 jobs? Will the U.S. Treasury put up the $58 billion that the companies must pay the UAW to support a trust fund for retiree health care? 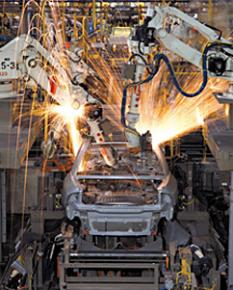 THOSE QUESTIONS loomed in the background as the Big Three automakers reported their worst monthly sales figures in years and huge losses. GM executives said that the company has $16.2 billion in the bank, but it expects to spend money for daily operations at a pace of about $2 billion a month. The company could run out of money by the end of next year.

CEO Rick Wagoner said that GM can't file for bankruptcy to get protection from creditors, since consumers are unlikely to buy cars from a bankrupt company. If the company were to go out of business altogether, it would send a wave of job losses through manufacturing and car dealerships that could eliminate 2.5 million jobs and wipe out $125 billion in personal income in just one year, according to the Center for Automotive Research, a think tank with close ties to GM.

"Letting GM go is a terrible idea," Wagoner said on CNBC. "Look at the effect of Lehman Brothers."

By invoking the September collapse of Wall Street giant Lehman Brothers--which led to a worldwide financial plunge--Wagoner is trying to maximize pressure on the government to fork over billions to GM.

He's following the example of U.S. Treasury Secretary Henry Paulson, who declared that the world economy would collapse if Congress didn't approve his $700 bailout for the Wall Street banks--and give him dictatorial control over how the money was spent. Wagoner wants the same flexibility--the ability to use a $25 billion Department of Energy loan for fuel-efficient cars to shore up losses, as well as access to the Wall Street bailout funds.

Even if the threat of a collapse of GM is real, Wagoner, like the bankers, is angling to use the money to cover up for his disastrous management of the company and carry through a restructuring at workers' expense.

GM, Chrysler and Ford kept pushing SUVs and pickup trucks that were profitable in the 1990s and resisted pressure for higher standards on fuel efficiency. As a result, the companies are still hemorrhaging money even after eliminating an estimated 100,000 jobs since 2006 and extracting tens of billions more in concessions from the UAW.

Free-market ideologues use the auto company's mismanagement to argue that they should be allowed to fail or radically downsize, as the steel industry did in the 1980s. But a U.S. government of any political stripe is unlikely to allow this to happen, given the disproportionately large economic impact of the auto industry.

To be sure, the domestic automobile industry is no longer synonymous with great-power military status as it was in the 1930s and 1940s, when car assembly lines were retooled to make tanks and bombers in the Second World War.

Nevertheless, the world's dominant economic and military power must maintain an industrial base, despite the pressures on individual companies to outsource or invest in cheaper labor markets overseas. For U.S. industry, the contradictions of globalization are coming to a head.

For Obama, the pressure to shore up the auto industry and manufacturing generally will be especially acute. Having promised aggressive policies to overcome the economic crisis and create jobs, it will be politically difficult for the new administration to sign off on a government rescue that includes the elimination of some of the best-paying blue-collar jobs in the country.

Limiting compensation for already-wealthy CEOs, as is the case in the bank bailout, may be a good political symbolism, but it won't halt, let alone reverse, the unraveling of the industry.

THE ISSUE is--or should become--what kind of auto industry bailout will take place. If the government is going to put up billions, why should a discredited and bloated management remain in place? Call the intervention what it is--nationalization. Throw out the management and use their compensation for investment--and put workers' committees in control of production.

Then there's the question of jobs. In the last UAW contract, the union agreed to allow the Big Three auto companies to hire new workers at about $14 per hour--about half the rate of current workers. One condition of a government loan should be payment of industry-standard wages. (Prompt passage of the proposed Employee Free Choice Act would spur the unionization of the nonunion, foreign-owned auto plants located mainly in the South, and take wages and benefits out of competition in the U.S. auto industry).

Certainly, the Obama government should insist on a moratorium on layoffs and guarantees of job security. It's nonsensical--not to say outrageous--to suppose, given the skyrocketing unemployment rate, that the government should finance Corporate America's elimination of any more jobs.

Won't keeping jobs protected and factories open add to the capacity glut in the auto industry--the capability to produce more cars than consumers will buy?

Not if the investment is directed toward development of new, energy-efficient vehicles and mass transit. If tens of billions of taxpayer dollars are going into the Big Three, taxpayers should have the right to stipulate that production be carried out according to social needs.

Another major issue in a government intervention in the auto industry is workers' health care and retirement costs.

The Big Three provide health care to about 2 million people, as well as pensions for 775,000 retirees or their survivors. And the Voluntary Employee Beneficiary Association (VEBA) trust funds worth $58 billion being set up by the companies will be underfunded at the outset, thanks to concessions made by UAW leaders, who are to control the trusts.

This problem, though, is best handled at a higher level: A government national health care program modeled on Medicare would eliminate the problem altogether.

If these demands seem far-fetched, it's useful to think back on the scale of the economic crisis and the speed at which it spread. After all, it was Henry Paulson--a former Wall Street CEO and free-market Republican--who carried out the nationalizations of Fannie Mae, Freddie Mac and AIG.

It's time for organized labor and the left to raise the stakes, especially when the incoming president has been elected on a promise to make the economy benefit working people.