Lee Sustar explains why deflation could be the signal of a long and severe recession.

THE RELIEF you feel at the gas pump and the grocery store could soon give way to even greater economic pain caused by falling prices.

It may seem hard to believe that deflation is worse than inflation, especially so soon after working people endured gas prices of upwards of $4 a gallon, plus skyrocketing costs for staple foods.

But the drop in key consumer prices of 1 percent in October has led to a panic about possible price deflation. While the price drop may not seem like much, it's the biggest such fall in 61 years, back when the economy was cooling down after high inflation in the Second World War.

"If we don't act swiftly and boldly, most experts now believe that we could lose millions of jobs next year," President-elect Barack Obama said November 22 during the Democrats' weekly radio address. "We now risk falling into a deflationary spiral that could increase our massive debt even further."

So what's wrong with consumers getting more for their money? The problem is that as companies are compelled to cut prices, they're also forced to scale back on investment and lay off workers. That, in turn, drives consumer demand further downward, forcing companies to cut prices again--along with wages, jobs and investment. 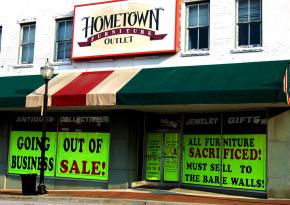 It's a vicious, downward cycle that's difficult to reverse. The prospect of deflation helped reignite new panic selling in the world stock market in recent days.

The U.S. economy hasn't fallen into a deflationary pit just yet. But prices are declining sharply, led by raw materials (termed "commodities" by economists). As of late October, the price of metals had declined 50 percent, and food had dropped 30 percent. The biggest drop was in the price of a barrel of oil, from about $147 in July to just under $50 on November 21.

These plunging commodity prices were largely responsible for the 1 percent fall last month in the consumer price index (CPI), a government statistic calculated on the basis of the price for a "basket" of certain goods. But prices are falling at all stages of production, from raw materials to finished goods.

"This is only the beginning," International Monetary Fund chief economist Olivier Blanchard told a Swiss newspaper. "The risk exists that the data will get worse and worse, which would then lead to more pessimistic expectations and accelerate a fall in demand. It will take a long time before we go back to normal conditions."

Driving such gloomy predictions is a drop in demand overall--not only in the U.S, but worldwide, as the recession goes global. The problem is exacerbated by the U.S., however, because the bursting of the housing bubble has cut into consumer spending in this country, which served previously as the importer of last resort for the world economy.

The wipeout of an estimated $6 trillion in housing wealth has forced workers to pay down debts and scale back spending. Falling wages and rising unemployment rates--joblessness rose from 6.3 to 6.5 percent from September to October--will further undermine consumer demand as layoffs mount.

"We have endured 760,000 job losses so far this year [as of October 26] even though real Gross Domestic Product (GDP) has expanded at a 1 to 2 percent annual rate," analysts at the investment bank Merrill Lynch wrote recently. "What happens when GDP contracts nearly 2 percent in 2009?"

Adding to the deflationary downdraft are enormous falls in the value of financial assets. In the year up to October, some $11 trillion were wiped off the books as a result of the drop in housing prices and financial markets--and that figure doesn't reflect the most recent falls in the stock market.

THESE DEFLATIONARY pressures invite comparison to the Great Depression, which began with the stock market crash of 1929 and saw steep cuts in production, falling prices and unemployment rates of 25 percent or more. Thus, the Federal Reserve Bank of St. Louis recently posted on its Web site a 1933 academic paper by economist Irving Fisher, who developed what he called a "debt-deflation theory of great depressions."

Fisher pointed out that as prices fall, the relative value of money increases--because a dollar can buy more. But that means the value of debts increase as well. As companies and individuals struggle to repay debts by liquidating their holdings--selling homes, companies and commodities at a steep loss--they add to the deflationary cycle. But then:

[d]eflation caused by the debt reacts on the debt. Each dollar of debt still unpaid becomes a bigger dollar, and if the over-indebtedness with which we started was great enough, the liquidation of debts cannot keep up with the fall of prices, which it causes. In that case, the liquidation defeats itself...The more the debtors pay, the more they owe.

In other words, Fisher argued, the free-market doctrine of "letting it rip"--that is, overcoming the crisis by allowing troubled companies to go out business and open the way for new expansion--actually has the opposite impact.

Despite their free-market fundamentalism, even Bush administration policymakers grasp this. That's why Federal Reserve Chair Ben Bernanke, an academic expert on the Great Depression, dug up obscure laws from the 1930s to expand the Feds' lending to investment banks earlier this year, one of around 20 new lending programs launched since the crisis broke.

Indeed, after the September failure of the investment bank Lehman Brothers, Bernanke pumped so much money into the system that he doubled the liabilities on the Fed's books to $2 trillion in just one month. At the same time, he has presided over cuts in the Fed's benchmark interest rate to just 1 percent--and as the Economist magazine pointed out, "the rate at which funds actually change hands, known as the 'effective rate,' has averaged around 0.25 percent."

Yet these rock-bottom interest rates and Fed loans still haven't induced the banks to lend. Staggering under their losses and fearful that other institutions they trade with may fail, the banks are hoarding money, including the nearly $300 billion spent so far in the federal government's Wall Street bailout.

Tightening the purse strings may be a rational decision for a single bank given the current conditions. But the same decision is irrational for the financial system as a whole. Inter-bank lending has slowed to a crawl, and even creditworthy companies and individuals can't get loans. Plus, the specter of even more colossal bank failures--Citigroup comes to mind--raises the risk of another credit lockdown.

As a result, the U.S. finds itself in a repeat of the kind of crisis that Japan experienced in the 1990s--a so-called liquidity trap, when even cutting the main interest rates to zero can't stimulate lending or investment. Policymakers refer to this exercise in futility as "pushing on a string."

The only means to avoid or reverse a deflationary spiral is government spending on a gigantic scale. For example, the Japanese government spent huge amounts in the 1990s on infrastructure, such as high-speed rail networks. Even so, the economy remained stagnant, and only returned to sustained growth in recent years thanks to demand for high-tech imports and capital goods from nearby China. (That demand is drying up, however, and Japan has entered recession, too).

SO THE big question is: How will Barack Obama's economic team face up to this crisis?

Although virtually all of Obama's economic advisers have retreated from the balance-the-budget doctrine popular during the Clinton era, it remains to be seen whether they are willing to countenance the kind of gigantic government intervention that will be needed to compensate for low consumer spending and weak business investment. In his radio address, Obama promised to create 2.5 million jobs by 2011. But that's not much in view of the fact that the U.S. has lost 1.2 million jobs in the last 10 months.

Then there's the question of priorities for social spending. As historian and activist Mike Davis in a recent essay:

Personally, I would love to commute via a sleek Euro-style bullet train from my home in San Diego to my job in Riverside, 100 grueling freeway miles away, but I'll take gridlock if the cost of rationing federal expenditure is tolerating the closure of my kids' school or increasing the wait in the local emergency room from two to ten hours.

If, after saving kindergartens and county hospitals, we someday hope to ride the fast train, then we need to rebuild the antiwar movement on broader foundations. The president-elect's original proposal for funding domestic social investment through downsizing the empire offers a brilliant starting point for basing economic growth on an economic bill of rights (as advocated by Franklin Roosevelt in 1944) instead of imperial over-reach and Pharaonic levels of military waste.

Given the scale of government intervention in the economy so far, and the likelihood of even greater spending in the future, economic priorities will be at the center of U.S. politics in the months and years ahead. The challenge for the left is to articulate its own agenda--and mobilize to fight for it.