Why we still need an antiwar movement

Eric Ruder looks at the questions facing the antiwar movement in the coming Obama era.

THROUGHOUT THE 2008 presidential campaign, the mainstream media presented Barack Obama and John McCain as candidates whose foreign policy agendas were diametrically opposed. The story line practically wrote itself: McCain vowed to forge ahead in pursuit of victory in Iraq, while Obama would end the war.

But on December 4, the front page of the New York Times revealed a "shocking" discovery:

On the campaign trail, Senator Barack Obama offered a pledge that electrified and motivated his liberal base, vowing to "end the war" in Iraq. But as he moves closer to the White House, President-elect Obama is making clearer than ever that tens of thousands of American troops will be left behind in Iraq, even if he can make good on his campaign promise to pull all combat forces out within 16 months.

In reality, Obama's campaign promise never amounted to more than a pledge to withdraw combat troops within 16 months of taking office, thus leaving a residual force in Iraq of between 40,000 to 80,000 troops. 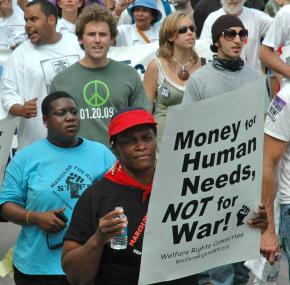 Obama not only refused to rule out the continued use of private military contractors, which today outnumber actual U.S. troops in Iraq, but he also left himself an escape clause, insisting that any withdrawal would take place only with the approval of the generals in the field.

Why did the mainstream media suddenly discover Obama's pro-war policies in early December?

But Obama could dismiss talk of a flip-flop by simply reiterating what he had said numerous times before. "I said that I would remove our combat troops from Iraq in 16 months, with the understanding that it might be necessary--likely to be necessary--to maintain a residual force to provide potential training, logistical support, to protect our civilians in Iraq," said Obama as he unveiled the core members of his national security team.

It's actually George Bush, not Barack Obama, who has agreed to a firm timeline for ending the U.S. occupation of Iraq. The recently signed status of forces agreement between the U.S. and Iraqi governments calls for complete withdrawal of U.S. forces by 2011.

But even this deadline is flexible. As the Times reported:

That status-of-forces agreement remains subject to change, by mutual agreement, and Army planners acknowledge privately that they are examining projections that could see the number of Americans hovering between 30,000 and 50,000--and some say as high as 70,000--for a substantial time even beyond 2011.

As American combat forces decline in numbers and more provinces are turned over to Iraqi control, these military planners say, Iraqi security forces will remain reliant on significant numbers of Americans for training, supplies, logistics, intelligence and transportation for a long time to come.

Why would Obama extend a war that he proudly claimed to have opposed before it started? Because Obama thinks it's important to secure U.S. interests in Iraq and the Middle East generally, and that means establishing a long-term foothold for U.S. bases and troops in Iraq--or at least weakening the influence of Iran, which was inadvertently enhanced in Iraq by the replacement of Saddam Hussein's largely Sunni regime with Shia forces with ties to Iran.

And it's little wonder that the military establishment is still ready to pursue victory, in spite of the cost in lives and money. During the Vietnam War, the Tet Offensive in 1968 made clear that the U.S. had lost--but it took seven more years, a mass antiwar movement and a revolt inside the U.S. armed forces before the generals decided to cut their losses and bring the troops home.

All this leads to the conclusion that there is still an urgent need for a U.S. antiwar movement that is capable of mobilizing people--in the streets, on campuses, in communities and workplaces, in local actions and national marches--on a large enough and sustained scale to force the U.S. political and military establishment to end the war in Iraq.

THE GROUND for building an antiwar movement is still fertile; Obama's victory demonstrates this. Many of his supporters voted for him because they responded to Obama's pledge to "end the war"--an impression cemented by the media's false picture of a pro-war McCain versus an antiwar Obama.

Obama's supporters expect him to bring the troops home and soon--yet his public statements, Cabinet appointments and the military planners he listens to all suggest a continuation of the war.

Whatever Obama wants or supports personally, the entire U.S. establishment--the generals, the Pentagon bureaucrats and the corporate elite--desperately want victory in Iraq and Afghanistan in place of the instability and chaos they've created so far, if for no other reason than to maintain the credibility of U.S. military might the world over.

What's more, Obama has made it clear that he intends to escalate the war in Afghanistan--with devastating consequences for Afghan civilians who will be the victims of the increased bombing runs, house raids and indiscriminate detentions, and the sharpening conflict between the U.S.-backed warlords on the one hand and Taliban fighters on the other.

In other words, millions of Americans expect an end to the war in Iraq, but Obama is signaling his willingness to continue the occupation, while escalating the war in Afghanistan.

This is a combustible situation. Even if Obama never promised to end the war, what's important is that people hope he did promise to end it.

For activists gathering in Chicago for a national antiwar conference organized by United for Peace and Justice (UFPJ) this coming weekend, Obama's election offers both promise and peril.

Antiwar activists, students, workers and community organizers all have a renewed sense of hope in the potential for real change. The challenge is to tap into this energy and reinvigorate an antiwar movement that has been almost invisible for the last couple years.

For much of the last 18 months, for example, many antiwar activists decided to fold their efforts into the Obama campaign. Now that Obama is set to take responsibility for running the wars in Iraq and Afghanistan, these currents face a crisis, neatly summarized in UFPJ's action proposal for the spring.

"While we know that we cannot stop our work, there are some who will take a wait-and-see attitude, and others who will not want to be viewed as protesting against Obama, the first African American president, just two months after he takes office," reads the proposal.

The proposal, which has the unanimous backing of UFPJ's steering committee, calls for a national mobilization in New York City on April 4, the anniversary of Martin Luther King's Beyond Vietnam antiwar speech in 1967, and his assassination a year later.

Rather than focus on opposing the wars in Iraq and Afghanistan, UFPJ proposes broadening the demands to include the economy and building a coalition with African American communities, as well as various others, including health care, education, housing, immigrant rights, women's issues, environmental justice and so forth.

The UFPJ proposal also includes a call for local actions around the sixth anniversary of the Iraq war on March 21, which would highlight the connection between military spending, the economic crisis, social spending cuts and the national debt.

In general, all progressive and left organizations should welcome the inclusion of broader demands--targeting the corporate criminals on Wall Street and connecting that to a march for the rights of African Americans and other oppressed groups.

But with an escalating war in Afghanistan and the inauguration of a new president, a central task of the antiwar movement remains the expression of clear opposition to U.S. military adventures, no matter who occupies the White House. UFPJ's attempt to avoid a national demonstration in Washington does our movement a disservice--and more fundamentally, it exposes UFPJ's inability to address the fact that Obama is taking over the war effort.

UFPJ's LEADERSHIP also circulated a competing proposal put forward by the same groups that organized a meeting of the National Assembly to End the Iraq War and Occupation in Cleveland this past summer. This proposal calls for a mass march in Washington on March 21 and a focus on antiwar demands.

The National Assembly proposal would rightly keep a badly needed concentration on U.S. war efforts. But the question is whether it will attract the support of more than a small minority of conference attendees.

If it doesn't, but the National Assembly goes ahead with a March 21 mobilization in Washington, this would mean competing rallies two weeks apart in Washington and New York--a replay of the dueling demonstrations organized by UFPJ and International ANSWER in the first few years of the antiwar movement.

UFPJ will no doubt attempt to portray this proposal as an unnecessary and damaging attempt to "split" the antiwar movement. But various elements within UFPJ have been advocating precisely such an outcome.

Carl Davidson, a leading figure within UFPJ, has written a document attacking the left for, in his view, getting the 2008 election "dead wrong." He accuses socialists of adding "fuel to the fascists' fires" by pointing out that Obama's election would not be sufficient to end the war, and by refusing to take Davidson's advice to abandon their independence and fold into the Obama campaign.

This approach is nothing new for Davidson. In 2001, Davidson advocated a "tactical alliance" with then-Secretary of State Colin Powell versus the neo-conservative hawks in the Bush administration--because, Davidson claimed, Powell advocated a "'narrow-the-target' focus on al-Qaeda and has worked to build a broad coalition of support."

But, of course, Powell didn't disagree with the Bush administration's overall war strategy, simply the timing and methods. It's precisely this strategy of looking to hostile political figures as allies that has put the antiwar and other progressive movements in their current position of weakness.

The conclusion of Davidson's current document is that UFPJ should pursue the marginalization, defeat and expulsion of those left forces he attacks for failing to see things his way. "It's not that we are demanding a split," writes Davidson. "The split has already taken place over the past two years, in real life and in actual politics."

But not once does Davidson acknowledge the elephant in the room--Obama's new responsibility for the war in Iraq, his embrace of the war in Afghanistan, and the political questions that flow from this. Nor does he seem at all concerned about the poisonous atmosphere that will be created by attempting to exclude antiwar forces that disagree with him.

Davidson's blind spot about the escalation of war in Afghanistan puts him at odds with Bill Fletcher, who represents another current within UFPJ's leadership. Though Fletcher would certainly receive Davidson's stamp of approval for his willingness to work on behalf of Democratic Party candidates, Fletcher doesn't shut his eyes to the central question facing the antiwar movement: how must the movement shift its approach as "both Iraq and Afghanistan become Obama's wars"?

More such fault lines may emerge at the convention, depending on the depth of frustration at UFPJ's unwillingness to confront this question.

Once the voting is done and the dust settles, activists will need to reassess as they figure out the necessary next steps to advance the core principles of the antiwar movement--among them, immediate withdrawal of all troops from Iraq and Afghanistan; adequate health care and other support for returning veterans; and defending the civil liberties of Arabs and Muslims--and force the new administration to meet these demands.