Their “crime” was flying while Arab

Nicole Colson looks at the backdrop to the latest instance of Arabs and Muslims facing discrimination when they travel.

DISCRIMINATION AGAINST Arabs and Muslims continues to rear its ugly head, particularly when it comes to their treatment at the hands of airlines and airport security.

That was made clear on New Year's Day when nine members of the same family were kicked off an AirTran Airways flight from Washington, D.C., to Florida--for committing the "crime" of flying while Arab.

Kasif Irfan said he and his family had boarded the flight, and the trouble began after his brother and brother's wife had a conversation about the safest place to sit on an airplane. Another passenger reported their exchange as suspicious to airline officials, who then pulled Irfan and his brother, their wives and their five children off the plane.

The other passengers were also removed and re-screened before the flight was allowed to take off. The family, however, was still not allowed to travel, but was instead subjected to an interrogation.

Despite being cleared by the FBI, AirTran refused to allow the family to book another flight, and they were forced to get seats on another airline. "The FBI agents actually cleared our names," Inayet Sahin, another of the family members kicked off the flight, told CNN. "They went on our behalf and spoke to the airlines and said, 'There is no suspicious activity here. They are clear. Please let them get on a flight so they can go on their vacation.' And they still refused." 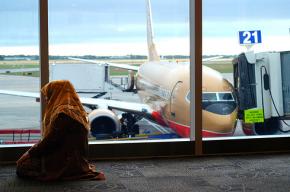 Kasif Irfan told the Washington Post that he believes he and his family were profiled because of their appearance. The men wore beards and the women wore headscarves, traditional for many Muslims.

While AirTran eventually "apologized" for kicking the family off the flight and reimbursed them for their added expenses, the airline's attitude could only be described as half-hearted. In fact, in a statement, it continued to maintain it did nothing wrong:

We apologize to all of the passengers--to the nine who had to undergo extensive interviews from the authorities, and to the 95 who ultimately made the flight. While, ultimately, this issue proved to be a misunderstanding, the steps taken were necessary.

AIRTRAN'S "BETTER safe than sorry" statement has been the standard-issue response to discrimination faced by Arabs and Muslims since the September 11 attacks.

As the Council on American-Islamic Relations (CAIR), which has filed a complaint about the family's case with the U.S. Department of Transportation, said in a statement, "We believe this disturbing incident would never have occurred had the Muslim passengers removed from the plane not been perceived by other travelers and airline personnel as members of the Islamic faith."

For more information about discrimination faced by Arabs and Muslims in the U.S., and what you can do to stop it, visit the Council on American-Islamic Relations and American-Arab Anti-Discrimination Committee Web sites.

The American-Arab Anti-Discrimination Committee's 2003-2007 edition of its "Report on Hate Crimes and Discrimination Against Arab Americans" is available online.

Elaine Hagopian's Civil Rights in Peril: The Targeting of Arabs and Muslims analyzes the impact of the U.S. "war on terror" at home, with the scapegoating of Muslims and Arabs.

There is plenty of evidence that CAIR is correct. The 2003-2007 edition of the "Report on Hate Crimes and Discrimination Against Arab Americans," released last month by the American-Arab Anti-Discrimination Committee (ADC), details a litany of abuse, sometimes violent, and discrimination directed at Arabs and Muslims. As the ADC noted:

[The] report found that the rate of violent hate crimes against the community (or those perceived to members of the community) has continued to decline from the immediate post-9/11 surge, but remains elevated from the years prior to 9/11. However, Arab Americans continue to face higher rates of employment discrimination in both the public and private sectors and major and continuing challenges associated with government watch lists, immigration enforcement, and other actions...

Arab-American students continue to face significant problems with discrimination and harassment in schools around the country. Arab-American students and faculty have faced increased levels of discrimination and political harassment campaigns, especially involving the Israeli-Palestinian conflict and efforts by right-wing groups to stifle debate on U.S. foreign policy in academia.

Defamation in popular culture and the media remains a very serious problem facing the Arab-American community. In spite of a far better record from the film and television industry in 2003-2007, defamation spread wildly in the non-fiction world of television, magazines, radio, newspapers and Web sites.

A campaign of relentless vilification against Muslims and Islam has been the single biggest contributor to the collapse in American public opinion of Islam during this period. The report clearly points out that "Islamophobia" and "anti-Muslim intolerance" is on the rise in the United States and highlights the mushrooming of the so-called "terrorism expert" as a cottage industry with the Arab and Muslim-American communities often in its crosshairs.

The report cites a number of violent attacks on Arabs and Muslims, including an Arab-American man in Detroit who was assaulted in 2006 by his neighbors, receiving a broken leg and a gash in his forehead after being beaten with a golf club and pieces of glass. Despite the fact that the man was singled out because of his religious and ethnic background, the ADC report notes that the police only identified the beating as a "neighborhood dispute" and that the man and his family still face harassment.

ACCORDING TO the report's executive summary, "Discrimination at airports based on stereotyping, over-zealousness or prejudice by airline personnel or even other passengers is now one of the main sources of discrimination facing Arab-American air travelers."

Examples of what's been called "flying while Arab"--racial profiling and discrimination against Arabs and Muslims at airports--include the November 2006 removal of six Muslim clerics from a US Airways flight because of complaints from passengers who witnessed the men perform their prayers in the airport terminal. Despite being cleared by authorities, US Airways refused to allow the men to travel on another flight the next day, and they were forced to use another carrier.

In June 2006, an Arab-American man checking in for a Southwest Airlines flight was allegedly told by a clerk following a disagreement over baggage, "You should go back to the country you came from until you learn how to treat women right."

One of the most highly publicized incidents of "flying while Arab" involved Raed Jarrar, a permanent legal resident of the U.S. who was born in Iraq.

Jarrar, an antiwar activist, was stopped by a TSA official from boarding a JetBlue flight from John F. Kennedy International Airport in New York to his home in Oakland, Calif.--because he was wearing a shirt that read, in Arabic and English, "We will not be silent." Jarrar was eventually allowed to board after his seat was switched to the back of the plane--but only if he agreed to cover his T-shirt with another shirt.

"I grew up and spent all my life living under authoritarian regimes, and I know that these things happen," Jarrar told WNYC radio at the time. "But I'm shocked that they happened to me here, in the U.S."

Officials in the case still defend their actions, but earlier this week--even as Kasif Irfan and his family were being removed from their plane--JetBlue and two officials with the TSA agreed to pay $240,000 to Jarrar for their actions against him.

"The outcome of this case is a victory for free speech and a blow to the discriminatory practice of racial profiling," Aden Fine, senior staff attorney with the ACLU First Amendment Working Group, which handled the case, told the Washington Post. "This settlement should send a clear message to all TSA officials and airlines that they cannot discriminate against passengers based on their race or the ethnic content of their speech."

Jarrar feels that the settlement sends a much-needed message. "I proved my point," he told the Post. "And now, I think it's pretty clear what they did to me was very wrong and should not be repeated with anyone."