Why I am a socialist

Chris Hedges, a Pulitzer Prize-winning former reporter for the New York Times and author of numerous books, including Collateral Damage: America's War Against Iraqi Civilians with Laila Al-Arian, makes the case for an alternative to the free market.

THE CORPORATE forces that are looting the Treasury and have plunged us into a depression will not be contained by the two main political parties. The Democratic and Republican parties have become little more than squalid clubs of privilege and wealth, whores to money and corporate interests, hostage to a massive arms industry, and so adept at deception and self-delusion they no longer know truth from lies.

We will find our way out of this mess by embracing an uncompromising democratic socialism--one that will insist on massive government relief and work programs, the nationalization of electricity and gas companies, a universal, not-for-profit government health care program, the outlawing of hedge funds, a radical reduction of our bloated military budget and an end to imperial wars--or we will continue to be fleeced and impoverished by our bankrupt elite and shackled and chained by our surveillance state.

The free market and globalization, promised as the route to worldwide prosperity, have been exposed as a con game. But this does not mean our corporate masters will disappear. Totalitarianism, as George Orwell pointed out, is not so much an age of faith as an age of schizophrenia. "A society becomes totalitarian when its structure becomes flagrantly artificial," Orwell wrote, "that is, when its ruling class has lost its function, but succeeds in clinging to power by force or fraud." Force and fraud are all they have left. They will use both. 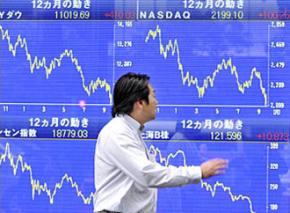 There is a political shift in Europe toward an open confrontation with the corporate state. Germany has seen a surge of support for Die Linke (The Left), a political grouping formed 18 months ago. It is co-led by the veteran socialist "Red" Oskar Lafontaine, who has built his career on attacking big business. Two-thirds of Germans in public opinion polls say they agree with all or some of Die Linke's platform.

The Socialist Party of the Netherlands is on the verge of overtaking the Labor Party as the main opposition party on the left. Greece, beset with street protests and violence by disaffected youths, has seen the rapid rise of the Coalition of the Radical Left. In Spain and Norway, socialists are in power. Resurgence is not universal, especially in France and Britain, but the shifts toward socialism are significant.

"By now, the [commercial] revolution has deprived the mass of consumers of any independent access to the staples of life: clothing, shelter, food, even water," Wendell Berry wrote in The Unsettling of America. "Air remains the only necessity that the average user can still get for himself, and the revolution had imposed a heavy tax on that by way of pollution. Commercial conquest is far more thorough and final than military defeat."

The corporation is designed to make money without regard to human life, the social good or impact on the environment. Corporate laws impose a legal duty on corporate executives to make as much money as possible for shareholders, although many have moved on to fleece shareholders as well. In the 2003 documentary film The Corporation, the management guru Peter Drucker says: "If you find an executive who wants to take on social responsibilities, fire him. Fast."

A corporation that attempts to engage in social responsibility, that tries to pay workers a decent wage with benefits, that invests its profits to protect the environment and limit pollution, that gives consumers fair deals, can be sued by shareholders. Robert Monks, the investment manager, says in the film: "The corporation is an externalizing machine, in the same way that a shark is a killing machine. There isn't any question of malevolence or of will. The enterprise has within it, and the shark has within it, those characteristics that enable it to do that for which it was designed."

Ray Anderson, the CEO of Interface Corp., the world's largest commercial carpet manufacturer, calls the corporation a "present-day instrument of destruction" because of its compulsion to "externalize any cost that an unwary or uncaring public will allow it to externalize." "The notion that we can take and take and take and take, waste and waste, without consequences, is driving the biosphere to destruction," Anderson says.

In short, the film, based on Joel Bakan's book The Corporation: The Pathological Pursuit of Profit and Power, asserts that the corporation exhibits many of the traits found in people clinically defined as psychopaths.

Psychologist Dr. Robert Hare lists in the film psychopathic traits and ties them to the behavior of corporations:

-- callous unconcern for the feelings for others;
-- incapacity to maintain enduring relationships;
-- reckless disregard for the safety of others;
-- deceitfulness: repeated lying and conning others for profit;
-- incapacity to experience guilt;
-- failure to conform to social norms with respect to lawful behavior.

And yet, under the American legal system, corporations have the same legal rights as individuals. They give hundreds of millions of dollars to political candidates, fund the army of some 35,000 lobbyists in Washington and thousands more in state capitals to write corporate-friendly legislation, drain taxpayer funds and abolish government oversight. They saturate the airwaves, the Internet, newsprint and magazines with advertisements promoting their brands as the friendly face of the corporation.

They have high-priced legal teams, millions of employees, skilled public relations firms and thousands of elected officials to ward off public intrusions into their affairs or halt messy lawsuits. They hold a near monopoly on all electronic and printed sources of information. A few media giants--AOL-Time Warner, General Electric, Viacom, Disney and Rupert Murdoch's NewsGroup--control nearly everything we read, see and hear.

"Private capital tends to become concentrated in [a] few hands, partly because of competition among the capitalists, and partly because technological development and the increasing division of labor encourage the formation of larger units of production at the expense of the smaller ones," Albert Einstein wrote in 1949 in the Monthly Review in explaining why he was a socialist.

"The result of these developments is an oligarchy of private capital, the enormous power of which cannot be effectively checked even by a democratically organized political society. This is true since the members of legislative bodies are selected by political parties, largely financed or otherwise influenced by private capitalists who, for all practical purposes, separate the electorate from the legislature. The consequence is that the representatives of the people do not in fact sufficiently protect the interests of the underprivileged sections of the population. Moreover, under existing conditions, private capitalists inevitably control, directly or indirectly, the main sources of information (press, radio, education). It is thus extremely difficult, and indeed in most cases quite impossible, for the individual citizen to come to objective conclusions and to make intelligent use of his political rights."

LABOR AND left-wing activists, especially university students and well-heeled liberals, have failed to unite. This division, which is often based on social rather than economic differences, has long stymied concerted action against ruling elites. It has fractured the American left and rendered it impotent.

"Large sections of the middle class are being gradually proletarianized; but the important point is that they do not, at any rate not in the first generation, adopt a proletarian outlook," Orwell wrote in 1937 during the last economic depression. "Here I am, for instance, with a bourgeois upbringing and a working-class income. Which class do I belong to? Economically, I belong to the working class, but it is almost impossible for me to think of myself as anything but a member of the bourgeoisie. And supposing I had to take sides, whom should I side with, the upper class, which is trying to squeeze me out of existence, or the working class whose manners are not my manners?

"It is probable that I, personally, in any important issue, would side with the working class. But what about the tens or hundreds of thousands of others who are in approximately the same position? And what about that far larger class, running into millions this time--the office-workers and black-coated employees of all kinds--whose traditions are less definite middle class but who would certainly not thank you if you called them proletarians? All of these people have the same interests and the same enemies as the working class. All are being robbed and bullied by the same system. Yet how many of them realize it? When the pinch came, nearly all of them would side with their oppressors and against those who ought to be their allies. It is quite easy to imagine a working class crushed down to the worst depths of poverty and still remaining bitterly anti-working-class in sentiment; this being, of course, a ready-made Fascist party."

Coalitions of environmental, anti-nuclear, anti-capitalist, sustainable-agriculture and anti-globalization forces have coalesced in Europe to form and support socialist parties. This has yet to happen in the United States. The left never rallied in significant numbers behind Cynthia McKinney or Ralph Nader. In picking the lesser of two evils, it threw its lot in with a Democratic Party that backs our imperial wars, empowers the national security state and does the bidding of corporations.

If Barack Obama does not end the flagrant theft of taxpayer funds by corporate slugs and the disgraceful abandonment of our working class, especially as foreclosures and unemployment mount, many in the country will turn in desperation to the far right embodied by groups such as Christian radicals. The failure by the left to offer a democratic socialist alternative will mean there will be, in the eyes of many embittered and struggling working- and middle-class Americans, no alternative but a perverted Christian fascism. The inability to articulate a viable socialism has been our gravest mistake. It will ensure, if this does not soon change, a ruthless totalitarian capitalism.