Nothing to apologize for

Michele Bollinger takes up the debate about what kind of politics will strengthen the movement for abortion rights in her review of the new book Abortion & Life.

THERE IS a great deal to be hopeful about as the 36th anniversary of the Roe v. Wade Supreme Court decision legalizing abortion passed this week.

Finally, George W. Bush is out of office. Alaska Gov. and former Republican vice presidential candidate Sarah Palin remains a punch line (at least for now). In the 2008 elections, anti-choice ballot measures were voted down in highly conservative places such as South Dakota. Barack Obama is expected to sign an executive order to reverse the global "gag rule" that bars international family planning groups funded by the U.S. from providing information about abortion.

But questions about the direction of the abortion rights movement are as pressing as ever. The Washington Post reported that 16,000 anti-abortion protesters were in Washington, D.C., for their annual anti-abortion march on January 22. This is smaller than recent years, but stands in stark contrast to the lack of mobilization by pro-choice forces. And while Obama has said he would sign the Freedom of Choice Act if it were passed by Congress, there is no indication that he will advocate for the legislation. 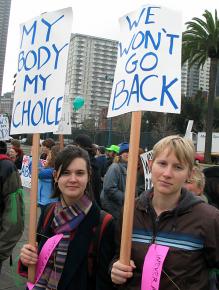 This is a time for the pro-choice movement, like many other struggles, to revisit central questions about how we should organize. And on first glance, Jennifer Baumgarder's Abortion & Life is a welcome addition to the discussion.

The book by the "third wave" feminist and pro-choice activist features at its center the "I Had An Abortion" theme around which Baumgarder, along with journalist and documentarian Gillian Aldrich, crafted their 2005 documentary of the same name.

One of the reasons Baumgardner and Aldrich created the film was to build on the conversation sparked by the overwhelming response to her "I Had An Abortion" T-shirts--Baumgarder herself marched wearing one at the April 2004 March for Women's Lives in Washington, D.C.

For scores of women, this slogan--along with Web sites like I'mnotsorry.net--was an unapologetic, visual affirmation of abortion, and represented a rejection of the silence, stigma and unwarranted shame surrounding abortion in our society.

In doing so, the book does its part to break the subject of abortion out of the shame and disparagement that has increasingly surrounded it since the decline of the women's movements of the 1960s and 1970s.

"Abortion without apology" was the clarion call of that time. Today, major pro-choice advocates and Democratic Party politicians alike--from Hillary Clinton to former NARAL head Kate Michelman--regularly maintain that abortion is a "tragedy" or a "sad" choice that we need "fewer" women to be making.

As the ideological discussion about abortion has shifted to the right over the past 30 years, many women internalized this shift, even as some utilized their right to abortion and most remained in favor of abortion rights.

While wearing an "I Had An Abortion" T-shirt isn't something everyone can--or wants--to do, the personal stories of women who sought abortions in our society expose the basic, fundamental reasons why women and only women must have the right to control their own bodies. The real experiences of women contradict the wide variety of myths about abortion perpetuated by the right.

Some stories featured in Abortion & Life confirm the fact that women have always needed and sought abortions, whether it is legal or not:

Marion Banzhaf, born 1953: "Kevin wanted to get married, but I wasn't really in love with him. His view was that we would drop out of school, and we would go live with his parents, and he would work at the Owens Corning glass factory, where his father worked. And I would stay home with his mother and take care of the baby. This was his plan, and it sends shudders up my spine still to think of it. So I was getting more and more desperate. I thought about killing myself father than live with Kevin's plan."

Jenny Egan, born 1980: "I'm one of five children in a Mormon family. My father is a Marine, Republican, Mormon lawyer. I was raised in a church where abortion was a horror and something that was not acceptable...I was sixteen when I got pregnant. It was with my boyfriend. The first time we had sex, it wasn't completely consensual. He would sort of accuse me of being a lesbian and--though it turned out he was onto something--in my high school world at the time, it was easier to have sex I didn't want than to be called a lesbian...God, the panic of picturing my life!"

ABORTION & Life also includes Baumgardner's analysis of major issues surrounding the pro-choice movement today, including counter-arguments to challenge the right-wing bigotry and moments of irreverence that are in keeping with a more uncompromising view of abortion rights.

But much of that gets lost in the overriding argument of her analysis, which, in keeping with much of "third wave" feminism, casts aside the political militancy of the 1960s generation of feminism, while trying to maintain a glossy, liberal critique of anti-abortion forces--in other words, treading a middle ground that takes us nowhere. This makes for a very disappointing book.

Baumgardner's role, in her words, has "moved from winning support for pro-choice legislation to examining how this generation's experience of abortion is shifting." This includes pushing aside a political orientation on winning back the ground taken by the right, and replacing it with a "pro-voice" orientation.

By "pro-voice," Baumgardner joins in what has been a right-wing critique of the mainstream pro-choice movement for "neglecting" the emotional experiences some women have after an abortion--feelings of sadness or depression, for example. She holds up the work of nonprofit organizations and counseling groups that have helped what Baumgardner deems to be a rightful "shift in the national conversation from 'keep your laws off my body' to 'let's talk about feelings and whether fetal life has value.'"

While the growth of organizations that promote counseling, and reproductive and mental health resources for women is arguably needed, Baumgardner wrongly conflates this work with a political strategy that can lead the way forward for the women's rights movement as a whole.

To Baumgardner, being "pro-voice" also means accepting language that the pro-choice movement used to reject wholesale--including the term "pro-life" (which Baumgardner herself uses throughout the book), "baby" (as opposed to "fetus" or "zygote"), "killing" and so on--for fear of alienating the scores of women who use these terms.

But in making this argument, Baumgardner confuses what may be sound advice for counselors running a clinic with what is necessary for a growing pro-choice movement. And she does so by taking pot shots at activists who try to fight for choice on a strong, politically confident basis:

Emily Barcklow...had an abortion when she was 19 and attending Evergreen State College. "It was not an easy decision," she recalls. "I struggled with feelings of deviance, selfishness and loss afterwards." Four years, lots of counseling and an "amazing ritual process" helped her feel resolved.

But at a NARAL event on the University of Washington campus in 2001, Barcklow spent hours preparing a presentation about her experience and closure ritual: "I arrived at the speak-out and was disappointed with the lack of depth in the other presentations--all recycled coat hangers, and we'll never go back signs. I would cite this experience as my first real disconnect from the mainstream abortion rights movement."

It's not much of a surprise, then, that in her chapter on "Can you be a feminist and pro-life?" Baumgarder answers, "The answer is a resounding yes"--while pointing out some apparently redeeming qualities in groups like Democrats for Life and Feminists for Life.

While it might seem as though she has gone off the deep end, Baumgardner is simply trying to reconcile a contradiction that just can't be reconciled--you cannot "value women" and at the same time deny women the fundamental right to control what happens to their own bodies.

IT IS true that because of years of attacks on the right to choose, some women identify themselves as being "personally opposed" to abortion, but "politically pro-choice"--and vice versa.

But instead of fighting to remain relentless on questions of principle--such as why a fetus isn't a baby, and how it came to be incorrectly referred to as such--Baumgardner maintains that we need to move past the "pro-choice/pro-life dichotomy." This is a mistake that is grounded in a perception that people's views are static and unchanging.

The fact is that people find a clear, confident and unapologetic case for abortion rights to be politically compelling. At its core, our society remains pro-choice and supportive of Roe v. Wade because women need to have control over when and under what circumstances they have children.

Every year, about half of the pregnancies in the U.S. are unplanned, and half of those are terminated--about 1.3 million a year; over one-third of women have an abortion by age 45. According to the Guttmacher Institute, 75 percent of women say they cannot afford to have a child, and that having a child would interfere with work, school or the ability to care for dependents; 50 percent say they don't want to be a single parent or are having problems with their partner.

For these reasons, there are activists in our communities and on campuses who want to organize to fight for access to abortion, emergency contraception and so on. This is the basis on which a new movement can be built. It is possible to push back against the attacks by the right and gain ground in terms of reproductive freedom in the coming era.

The stories told in Abortion & Life illustrate how imperative it is that we fight for these rights. But the politics articulated by Baumgardner amount to a political concession to the right, put forth by a central figure of the younger generation of feminists who is supposed to be leading the pro-choice movement forward.

We will need to do much better if we are to take advantage of the possibilities in the future.