Are unions getting the backseat?

Republicans and big business are going all out to stop the Employee Free Choice Act. How will labor respond?

LABOR UNIONS spent more than $450 million and hundreds of thousands of hours to elect President Obama and a Democratic Congress last November.

They hoped that the Democrats' sweep would allow them to win the Employee Free Choice Act (EFCA), a proposal to change labor law so a workplace can be unionized if a majority of its workers sign cards supporting a union.

Labor hopes that this reform will transform the current climate for union organizing, making it easier for unions to recruit workers. Under current labor law as interpreted by the National Labor Relations Board (NLRB), employers have multiple ways to derail, delay or ignore workers' decisions to choose unionization through NLRB-overseen elections.

Throughout the campaign, Obama backed EFCA. He even told union audiences that he, as president, would walk picket lines with them.

In contrast, organized business hates EFCA along with any other measure that would make it easier to unionize. The U.S. Chamber of Commerce has pledged $10 million to defeat the legislation. It is joining with other business organizations to run a deceptive ad campaign that couches its opposition to EFCA in terms of defending workers' rights to privacy and to vote in secret-ballot elections.

Unfortunately, business has succeeded in sowing enough confusion on the issues that it has even gotten liberal Democrats like Rev. Al Sharpton and former Sen. George McGovern to sign on to the campaign to defeat EFCA.

At the beginning of Obama's term, the Republicans and the right are flailing, unsure of how to confront the new era. Leading the opposition to the EFCA has two benefits.

First, it puts the Republicans back in touch with their main constituency--big business, which has been noticeably generous toward Obama and the Democrats during the 2008 election campaign.

Second, the Republicans are preserving their own position. They realize that organized labor still provides much of the electoral infrastructure for the Democratic Party. A larger union sector means more money and person power for Democratic campaigns, and more Democratic voters.

Numerous public opinion studies show that unionized workers tend to define their priorities and interests as being about secure jobs, health care and retirement security. Non-unionized workers (calling Joe the Plumber) are much more open to the conservative cultural values (opposition to abortion, gay rights, etc.) that the Republicans trot out as their appeal to average Americans. 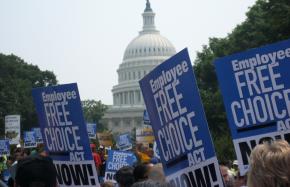 THE REPUBLICANS and their business allies have been road-testing their approach on EFCA in a series of skirmishes before the big battle. One of these was the GOP's campaign in December, led by smarmy Tennessee Sen. Bob Corker, to make the United Autoworkers union the fall guy for the near-bankruptcy of the Detroit Three auto companies.

During the negotiations over the release of federal bailout funds to GM and Chrysler, Corker and other GOPers hogged a lot of media time labeling UAW members' wages and benefits as the source of the U.S. auto industry's problems.

To the Republicans, it didn't matter that the Congress ended up releasing the bailout money to the automakers. They had succeeded at establishing a narrative, largely accepted in the media, that unionized workers were to blame for economic problems.

A December 10, 2008, internal GOP memo, obtained by MSNBC's Countdown with Keith Olbermann, established this. The memo read, in part: "This [the auto bailout] is the Democrats' first opportunity to pay off organized labor after the election. This is a precursor to card check and other items. Republicans should stand firm and take their first shot against organized labor, instead of taking their first blow from it."

More recently, Republican senators delayed the confirmation of Rep. Hilda Solis, Obama's choice for labor secretary, because of concerns that she would help pass EFCA.

So business and the Republicans have defined EFCA as a life-or-death matter. And the unions have similarly staked their future on it. EFCA is one issue where all of Obama's gauzy talk of "bipartisanship" and "working across the aisle" won't get him anywhere.

When this opposition arises, it will put Obama and the Democrats to the test. Will they take advantage of the expectations their election raised to marginalize the Republicans? Or will they retreat.

Recognizing worries that he's already decided to de-emphasize EFCA, Obama himself tried to reassure supporters during an interview with the Washington Post:

I think the basic principle of making it easier and fairer for workers who want to join a union is important. And the basic outline of the Employee Fair Choice Act are ones that I agree with.

Now if the business community's argument against the Employee Free Choice Act is simply that it will make it easier for people to join unions, and we think that is damaging to the economy, then they probably won't get too far with me. If their arguments are we think there are more elegant ways of doing this, or here are some modifications or tweaks to the general concept that we would like to see...

But in terms of timetable, if we are losing half a million jobs a month, then there are no jobs to unionize. So my focus first is on those key economic priority items that I just mentioned.

Artful politician that he is, Obama tried to reassure labor, to tell business he's willing to listen to their concerns and to say that he's planning to delay EFCA (or at least not speed it along), all at the same time.

WHERE HAS this left EFCA's supporters? There are some not-so-encouraging signs.

For one thing, Solis has taken to telling senators that she's not really sure where she stands on EFCA--despite her long record of support for it. If she (and the administration) thinks this will grease her confirmation the way that Supreme Court appointees who refuse to answer questions about Roe v. Wade win approval, she should think again.

Why not publicly defend the right of workers to join a union (what a thought for a labor secretary!), instead of trying to placate labor haters who, it should be remembered, were overwhelmingly defeated last November.

Organized labor has promised a multimillion-dollar effort to press for EFCA. But aside from some clever television commercials, labor's campaign is not much in evidence.

In fact, labor seems to be taking a back seat in the new administration, perhaps following advice laid out in an internal memo UNITE HERE President John Wilhelm wrote last September. According to excerpts leaked to Politico.com, Wilhelm wrote:

I disagree with the notion that we should flood a new Obama administration with all sorts of proposals for regulatory changes, executive orders, appointments, etc. To the contrary, I believe that we should have only one demand of an Obama administration: that the President of the United States publicly, repeatedly and strenuously advocate that workers have unions because unions are necessary to build a good America; that he apply that advocacy to specific worker fights and not just general statements; and that he put people on the [National Labor Relations Board] and in his cabinet those who share that view and are committed to implementing it.

Wilhelm added that he doesn't think the unions should launch a "massive campaign" for EFCA because it isn't, in his words, a "magic wand."

Wilhelm may be right about EFCA's ultimate impact. It will only spur organizing if unions and nonunion workers take advantage of it.

But isn't this treading too lightly? If labor defers to the Democrats' delaying of EFCA, it runs the risk of giving its enemies more time to organize against the measure.

If Obama introduced EFCA as part of his initial "economic recovery" plan, he could tie the right to organize to the need to reactivate the economy for the benefit of working people. If EFCA is introduced later, there's a better chance its opponents will be able to label it as "special interest" legislation--a payoff to a Democratic interest group--as a means to kill it.

So labor's deference to Obama could hurt its chances to win the reforms it wants. If labor believes that the EFCA is essential to help rebuild the labor movement, it should demand that it be passed now--and not be put off to some future that may never come.

One of the truisms of American politics is that the biggest changes to government policy happen when presidents are at the height of their popularity during their initial honeymoon. That's precisely the time when we should be demanding and organizing for change, not sitting on our hands and biting our tongues.