We know where Bezos gets his billions

Working at Amazon isn’t exactly what the company’s multibillionaire CEO says it is, according to an Amazon worker and member of the Democratic Socialists of America.

A few weeks ago, a co-worker (let’s call her Rosa) and I were assigned to a work area and tasked with moving an endless stream of heavy boxes off a conveyor belt, many weighing up to 50 pounds.

Even a bigger guy like myself finds this particular area physically draining after only an hour. At the beginning of the shift, Rosa, who is maybe 5-foot-2 and suffers from migraines and insomnia, informed a manager that she’d only slept a few hours the night before and was enduring a migraine headache.

When she asked to be moved to a less intense area, she received a response typical at our warehouse: “Let me look into it, I’ll be right back.” He didn’t come back. 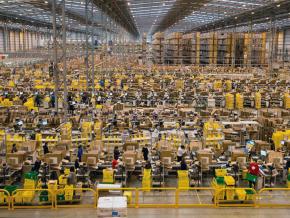 Two to three hours of moving boxes later, Rosa’s face turned so pale from exhaustion that I thought she was going to puke or pass out. I took her to “AmCare” (Amazon’s onsite “medical” service) for treatment, thinking they’d give her fluids and time to rest.

Five minutes after I returned to our area, Rosa walked up with tears in her eyes, informing me that the “medical” staff had told her there was “nothing wrong” and to “go back to work.” It took me two minutes to find a co-worker in a less demanding area who agreed to switch with her; Rosa managed to survive that shift.

Managers wheel around computer stations all day, monitoring and surveilling the speed and accuracy of how fast and effectively we work. To put it plainly, we are treated like robots, interchangeable parts; managers move us around the warehouse at their whim.

While the mantra of “safety first” is repeated by our bosses like a broken record, Rosa’s story shows otherwise: Short-term production goals are all that matter while injuries and illness are annoyances to be swept under the rug.

Right next to our break room near the warehouse entrance, a giant flat screen TV publicly displays our “rate” (how fast we do our jobs). Some people nervously study it. Others, like myself, ignore it. But from our first shift, we feel the pressure of competition.

Want to get involved with the Portland DSA Amazon Solidarity Committee? Call 541-375-0805 or email us at [email protected].

Amazon workers on the inside are actively fighting to help unionize the workplace. Support their efforts financially by donating to the hardship and strike fund.

If you’re not “meeting your rate,” managers come up to you and say things like, “Okay guys, let’s pick up the pace,” or “Do you need to be retrained in that?” A manager actually said to us a few days before Christmas, “We need to hit our [production quota] or little Timmy won’t get his Christmas present on time this year.”

Of course, we are forced to compete so that we don’t get laid off or fired. (The vast majority of employees at my site appear to have worked there for three months or less.)

Yes, we work hard. There’s no other option.

A few of the “fun” parts of our day: high-fiving managers by the exit after “crushing it,” listening to the latest Imagine Dragons “hit” blaring at unspeakable volumes right before and after every shift and break, ignoring the ping-pong table or break-room board game selection because we’re too tired to have fun, being chastised for not filling out “Unicorn [employee] of the Month” surveys, throwing packages against walls hoping to smash the contents.

We work multiple jobs. We live paycheck to paycheck. We skip meals to save money. We don’t have health care. We sink deeper into student loan, credit card and medical debt. We spend more than two hours on public transportation to work a part-time shift. We ignore pain shooting through our backs, joints, knees, necks, minds.

We are one cracked radiator or rent increase from catastrophe. Even with the $15-per-hour “raise,” we live in poverty (my food stamps were cut from $190 to $43 per month). And for those of us who do get full-time hours, we all know that $15 is not a living wage in the Portland metro area when the cost of housing, food, transportation, etc., is skyrocketing.

Contrast this with the fact that Oregon has given or promised Amazon more in corporate welfare than any other state in the country, according to an October 2017 report.

The reality is that the work is boring, monotonous, alienating and physically painful. It is not fun. Like working-class and poor people the world over, our survival depends on the financial and emotional support we receive from our families, friends and comrades, and also through the bonds of solidarity forged in battle against those exploiting and oppressing us.

A few days after “peak” season (the six-week or so holiday rush) ended, I arrived at the warehouse five minutes before my shift, the same time as many of my co-workers. But there was a problem  —  for some, their badges were not allowing them through security.

A security guard came into the lobby to awkwardly break the news: “Sorry, but...you all don’t work here anymore.” I found out I was not laid off because my badge worked. Amazon did not even bother to call, e-mail or provide any other form of notice of layoff to a number of the others.

Some had driven 40 minutes and others rode the bus over two hours to get there, wasting scarce gas and bus money, all to be publicly humiliated. Merry Christmas.

So far, the only history we have played any part in is having our labor stolen by Jeff Bezos, the richest man in the world, whose current net worth is probably somewhere north of $150 billion, and the company he founded, Amazon, capitalism’s first trillion-dollar corporation.

Class struggle is a simple concept: Bezos is rich because we are poor. If we apply Business Insider’s reporting of his 2018 net earnings to right now, Bezos’ loot has increased by around $900,000 since you started reading this article (Medium estimates it as a six-minute read, so about $150,000 per minute).

So what does one spend such obscene quantities of money on? If you’re Jeff Bezos, you spend it on space exploration, a Gulfstream jet, mansions, your very own newspaper. Really, anything but paying your taxes.

But there is a different history simultaneously being made. When asking co-workers “Why do you think management raised our wage to $15?” the most common response I received is “Bernie Sanders.” But maybe Bernie dragging Bezos’ name publicly through the mud isn’t the only reason Amazon buckled.

Each week seems to bring more reports of us, Amazon workers, about organizing unions, boycotts and strikes all over this country and the world. In the 1930s, socialists and working-class people unionized the auto industry, raising the standard of living directly for hundreds of thousands of union households and indirectly by tipping the balance of power away from the Bezos class and toward workers.

The shock waves of these monumental victories were felt for entire generations. Why is Amazon like the Ford or GM of the 1930s? Why is it a strategic target?

To name just a few reasons: Amazon is at the forefront of anxieties about automation and technological change; its symbolic stature as a monopoly capitalist firm whose profit-seeking tentacles are slithering into every possible market it can devour; a warehouse workforce representative of the diverse modern working class in terms of race, gender, etc.; and, perhaps most importantly, the disproportionate power that unified Amazon workers would have when striking within the logistics industry chokepoints in the national and global economy.

If the last 50 years of relentless assaults from the bosses have shown us anything, it’s that when we don’t fight, we don’t win.