A new movement against Israel’s apartheid

Eric Ruder looks at the new movement taking shape in this country and around the world--for boycott, divestment and sanctions against Israel and its oppression of the Palestinian people.

THE RUTHLESS assault on the 1.5 million Palestinians of Gaza marked a decisive turning point in Israel's six-decade war of conquest.

In the course of 22 days, Israeli air strikes, artillery shells and invasion forces killed 1,400 Palestinians, injured 5,000 and devastated Gaza's civilian infrastructure. The onslaught also shattered the illusion that--after more than a decade of a "peace process" that was supposed to establish a Palestinian state--Israel has any intention of letting Palestinians realize their aspirations for self-determination.

The ferocity of Israel's offensive, the enormous loss of civilian life (more than 90 percent of those killed and wounded were civilians) and the unanimous support for the carnage across the Israeli political spectrum shocked the world. Hundreds of millions of people watched in horror as the images of devastation and reports of civilians burned by white phosphorous bombs or buried in the rubble of their former homes filled evening news broadcasts.

But the assault on Gaza has also brought a change of another sort. It stirred a commitment among people around the world that the time has come to do something about the intolerable conditions facing Palestinians. 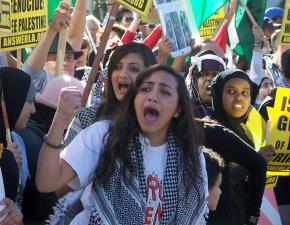 Labor unions, student groups and other organizations have responded to the renewed calls from Palestinians for a campaign of boycott, divestment and sanctions (BDS) to put pressure on Israel to end its apartheid policies toward the Palestinian population, both within the state of Israel itself and under Israeli occupation in the West Bank and Gaza.

In Britain, student groups at two dozen universities organized sit-ins and building occupations to demand that their educational institutions condemn Israel's war crimes, cancel speaking events or honorary titles for Israeli officials, donate surplus supplies such as computers and books to Palestinian schools, and grant scholarships to students from Gaza.

In South Africa, dockworkers refused to unload a ship carrying Israeli goods. The action had a special symbolic significance, given the inspiring example of the South African struggle that overturned apartheid in 1994. As the Palestinian Boycott, Divestment and Sanctions National Committee (BNC) stated in a February 4 press release:

If you want to learn more about the growing struggle against Israeli apartheid, see the Global BDS Movement Web site and the Palestinian Campaign for the Academic and Cultural Boycott Web site.

Union activists considering ways to bring up the issue in their own locals will find handy materials at the Canadian Union of Public Employees Ontario Web site.

Haidar Eid has written an article titled "Sharpeville 1960, Gaza 2009" that recounts his experiences during Israel's war and adds his voice to call for an international movement to boycott, divest and sanction Israel, modeled on the anti-apartheid movement.

The One Democratic State Group has issued "A Call from Gaza" that asks activists and organizations to demand that their governments sever ties with Israel, and calls for Israel's war criminals to be brought to justice.

Coming weeks after the massive Israeli massacre in Gaza, this distinguished expression by SATAWU [the union of South Africa's dockworkers] of effective solidarity with the Palestinian people in general, and with Gaza in particular, sets a historic precedent that reminds us of the first such action during the apartheid era taken by Danish dock workers in 1963, when they decided not to offload ships carrying South African products, triggering a similar boycott in Sweden, England and elsewhere.

Dockworkers in Greece threatened to block a ship carrying weapons to Israel during the Gaza offensive, and in late January, the Maritime Union of Australia endorsed the call for a BDS campaign, and pledged to boycott all Israeli vessels, as well as all vessels bearing goods arriving from or going to Israel.

In the U.S., a wave of student occupations is taking shape, starting with the University of Rochester and New York University, and others in the planning stages.

In Canada, the Ontario division of the Canadian Union of Public Employees (CUPE), which represents some 200,000 government and other public-sector workers, passed a motion calling for an academic boycott of Israel and an end to any research or investments that could benefit the Israeli army. British and French academics have likewise issued statements calling for a boycott of Israel.

Thus, despite the trauma inflicted during the Gaza offensive, the emerging BDS movement has given a renewed sense of optimism to millions of Palestinians who have felt for years that the world shrugged as they faced daily threats to their existence. As the BNC continued:

If Gaza today has become the test of our universal morality and our common humanity, the fast-spreading BDS movement around the world has passed the test with flying colors. In fact, worldwide support for BDS against Israel in reaction to its war crimes...has shown that international civil society fully recognizes that Israel must be held accountable before international law and must pay a heavy price for its atrocities and ongoing willful destruction of Palestinian society.

NEVERTHELESS, SOME people raise objections about whether a BDS campaign is justified or effective--or both. Does it make sense to describe Israel as an apartheid state, they ask--and in any case, will a BDS campaign have the desired effect?

While some who raise such considerations would defend Israel no matter how blatant its injustices, others have honest questions about such issues, which deserve careful answers, especially considering that so many people are just learning about the Palestinian struggle.

Though Israelis generally recoil at any comparison of Israel and South Africa, the shared pattern of racist discrimination and control is unmistakable.

"Apartheid was an extension of the colonial project to dispossess people of their land," said South African cabinet minister Ronnie Kasrils during a visit to Jerusalem. "That is exactly what has happened in Israel and the Occupied Territories--the use of force and the law to take the land. That is what apartheid and Israel have in common."

Kasrils should know what he is talking about. He is one of a handful of Jews who were active as guerilla fighters in the African National Congress during the anti-apartheid struggle.

"The Intifada is the Palestinian people's war of national liberation," wrote former Israeli Attorney General Michael Ben-Yair in 2002 in Israel's Ha'aretz newspaper, referring to the Palestinian uprising that began two years earlier. "We enthusiastically chose to become a colonialist society, ignoring international treaties, expropriating lands, transferring settlers from Israel to the Occupied Territories, engaging in theft and finding justification for all these activities...We established an apartheid regime."

Indeed, Palestinians today endure the Israeli equivalent of the pass laws of South Africa's white minority regime. In East Jerusalem and the West Bank, Palestinians must spend hours waiting to pass through checkpoints to travel distances that should take minutes--all while suffering humiliation and abuse at the hands of Israeli soldiers. Then there are the house demolitions, the strangulation of the economy and the constant threat of worse, in the form of targeted assassinations or violence from Jewish settlers.

"The similarities between the situation of East Jerusalemites and Black South Africans is very great in respect of their residency rights," says John Dugard, a professor of international law who helped construct South Africa's human rights law in the post-apartheid era, and now serves as the UN's chief human rights monitor in the West Bank and Gaza. "East Jerusalem has territorial classification that has the same sort of consequences as race classification had in South Africa in respect of who you can marry, where you can live, where you can go to school or hospital."

BUT EVEN if Israel can be accurately called an apartheid state, won't a BDS campaign--and especially a cultural, academic and sports boycott--make impossible precisely the kind of exchange necessary to end Israeli apartheid?

As Haidar Eid, a resident of Gaza, a professor of English literature, and a member of the steering committee of the Palestinian Campaign for the Academic and Cultural Boycott of Israel, explains:

The same argument was used against the academic, cultural and sports boycott of South Africa.

In the 1970s and '80s, Margaret Thatcher and Ronald Reagan talked about 'constructive engagement' as a way to defend their diplomatic ties with South Africa. Some academics and athletes echoed these same arguments. But they forget that they are making an abnormal situation into a normal one. The international community had to make it clear to the white racists of South Africa that what they were doing was unacceptable.

I have no problem with the exchange of academic ideas. But I myself am an academic. I have been invited to five conferences over the last year, but I have not been allowed by the Israelis to leave Gaza. Why should there be such preoccupation about the freedom of exchange of ideas with Israeli institutions when Israel itself denies such exchange to Palestinians in all spheres of life?

Also, it's important to point out that we are only talking here of boycotting institutions, not individual academics, and we are in favor of exchange with Israeli academics who object to Israel's occupation, who support the right of return of the more than 6 million Palestinian refugees scattered throughout the region and so on. Israeli academic institutions, on the other hand, have unfortunately supported the occupation of Gaza and the West Bank, supported the dispossession of Palestinian refugees since 1948, and have not raised their voices against the latest massacre in Gaza.

An international campaign of the sort that was essential to the eventual victory of the anti-apartheid struggle in South Africa is just as essential--if not more so--in the case of Israel because of the blanket support Israel receives from the U.S., the European Union and the United Nations Security Council.

The U.S., for example, gives billions of dollars annually--in the form of both military and economic aid--to Israel, and this support is crucial to Israel's ability to continue its policy of territorial expansion and repression of Palestinians.

Likewise, the European Union in recent years has expanded, rather than reduced, its economic ties with Israel, a development that no doubt encouraged Israeli leaders to carry out the recent Gaza massacre without fear that such conduct might jeopardize their economic and political standing in the world.

The United Nations regularly reaffirms resolutions stipulating that Israeli settlements are illegal under international law and calling on Israel to accept the return of Palestinian refugees. But when it comes to enforcing its resolutions, the UN, which is beholden to world powers such as the U.S., won't take any action to compel Israel to live up to its obligations under international law. As Eid explains:

We've lost faith in governments, in the United Nations, and the rest of the so-called international community. We've said our only hope is with civil society organizations, unions and solidarity movements--and this is what is happening right now.

We don't want people just to react to the Gaza massacre for a couple of months, and then forget about it. We want this to continue. Israel is under fire now from civil society organizations. This is a historical moment, and we must seize it.