The war off the battlefield

Phil Aliff, a member of Iraq Veterans Against the War, draws on his own experience with the military's inadequate mental health care system to make sense of the tragic shooting of five U.S. soldiers in Iraq by an Army sergeant being treated for symptoms of PTSD.

WHILE BEING treated for symptoms of post-traumatic stress disorder (PTSD) in mid-May, Sgt. John Russell shot and killed five fellow soldiers at the Camp Liberty combat stress clinic in Baghdad. The incident is the deadliest soldier-on-soldier attack since the U.S.-led invasion began in 2003.

While exposing the stress placed on American forces in occupied Iraq, the shootings also raise questions about the military's treatment of soldiers with PTSD,

Russell, a communication specialist from Texas in the Army's 54th Engineering Battalion, was on his third tour of duty in Iraq and had also deployed to Bosnia and Kosovo. Only a week earlier, his chain of command had taken his weapon and referred him to counseling over concerns about his mental state.

Russell was escorted out of the clinic by an armed soldier after an altercation with military physicians. He then allegedly gained control of that soldier's weapon and returned to the clinic where he opened fire on the other service members. The military is charging the 44-year-old with five counts of murder and one count of aggravated assault, according to Major Gen. David Perkins. 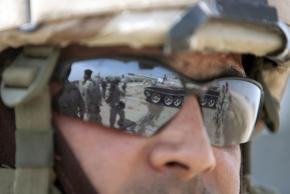 There are many instances of shootings or suicides by service members when they return home, but the military has been able to avoid direct responsibility in these cases, since this violence takes place far from the battlefield.

This case is different--and it's forcing the military to say something about the stress that the occupation is placing on soldiers.

In addition to murder charges against Russell, the Army has initiated an internal investigation to determine if there are adequate mental health facilities in Iraq, according to a military spokesperson, Lt. Col. David Patterson.

Such internal investigations have been used many times by the military as a tactic to evade responsibility for incidents such as the systematic torture at Abu Ghraib prison and the mistreatment of wounded soldiers at Walter Reed Army Hospital. It's like handing over the investigation of a bank robbery to the bank robber.

Unfortunately, these "responses"--the charges against Russell and the internal investigation--don't begin to address the real crisis in veteran health care associated with the occupations of Iraq and Afghanistan. In fact, the military's aim is to obscure the real issues--by assigning individual blame on the one hand, and burying them under a mountain of red tape on the other.

BENEATH THE shadow of Antenna Hill, which sits at the center of the camp and is used as a radio tower for military communications, Camp Liberty is a sprawling forward operating base that houses thousands of soldiers conducting combat operations in Baghdad and the surrounding suburbs. It is part of a larger base called the Camp Victory Complex, which includes the military section of Baghdad International Airport.

As an infantryman with the U.S. Army's 10th Mountain Division, I was stationed at Camp Liberty from August 2005 to July 2006. When I heard the Army's version of the incident, I was reminded of the living conditions I experienced there, which the military conveniently left out of its reports to the media.

Though soldiers are required to clear their weapons of ammunition when on base, it is very common for units to compel their personnel to keep a magazine of ammunition with them at all times. This includes during walks to the showers and meals in the dining facility. At one point during my tour, service members were turned away from the PX (the military equivalent of a Wal-Mart) if they didn't have a magazine on them.

And of course, the military will never openly discuss the most glaring and obvious fact needed to make sense of this tragic incident: that it is completely ill-equipped to identify and treat PTSD in theater.

While deployed to Iraq, I remember a soldier in my unit who was treated at the combat stress clinic at Camp Liberty. After my platoon suffered numerous improvised explosive devices, or IED, attacks, this soldier requested treatment for symptoms of PTSD. He was disarmed and taken to the clinic where he spoke with Army physicians, and then was released back to the unit almost immediately. This soldier finished his tour on almost daily patrols while taking medication for anxiety and sleeplessness.

Though not treated at the combat stress clinic, I have my own firsthand experience with the limits of Army medical care. One day, we were struck by an IED attack while I was riding in the gunner's turret of a military vehicle, which exposed me to the blast directly.

The physician's assistant (PA) for our battalion told me that I should not go back out on patrol for a few days. But my company commander told the PA that I was fine and able to go back out on missions. Though this officer was not a qualified physician, I began patrolling again almost immediately.

Sgt. Russell's unit may have preemptively disarmed him, but the number of soldiers affected by PTSD is enormous--so enormous, in fact, that it's astonishing that an incident such as this didn't happen sooner. Failure to provide adequate resources for treatment while placing blame on individual soldiers who snap under pressure should be considered the real crime.

In reality, the U.S. military doesn't adequately address the health needs of soldiers because it's not in its interest to do so.

The occupations of Iraq and Afghanistan have placed a serious strain on the military, forcing it to send thousands of soldiers back for repeated tours--even while they are medicated for mental health issues--so that military and civilian leaders can avoid the high political costs of using a draft to adequately staff the military's ranks.

What's more, the military regards its soldiers as machines whose needs are about the same as the guns they carry. On a moment's notice, soldiers are expected to rush onto the battlefield with little regard for their own lives and even less for the lives of their "enemies"--and then just as quickly return to their bases, their homes and their lives, without exhibiting any enduring mental or emotional impact.

The reality of life in a war zone is starkly different. Two out of five suicide victims in Iraq and Afghanistan have been found to be on antidepressants, according to journalist Dahr Jamail. And an anonymous survey of U.S. troops in the fall of 2007 found that 12 percent of combat troops in Iraq and 17 percent in Afghanistan were on prescription drugs, primarily antidepressants or sleeping pills, according to the Army's fifth Mental Health Advisory Team report.

Instead of addressing the root cause, the military attempts to treat the symptoms in order to maximize the number of boots on the ground. It's now common knowledge, for instance, that fewer deployments and longer "dwell times" in the U.S. before being shipped back overseas can reduce the incidence of PTSD. But most service members only return home for a year before their next deployment begins.

THE U.S. is now bogged down in two disastrous occupations, but the Obama administration has plans to keep substantial numbers of troops in Iraq while expanding the war effort in Afghanistan and Pakistan.

As debilitating as combat stress is for U.S. troops, the populations living under U.S. occupation face even greater trauma, lack of resources and mental health disorders. "Children in particular are showing behavioral problems and depression at a higher rate than one would expect in a population this size--three times as high," according to Dr. Majid al-Yassiri, chair of the London-based Center for Psychosocial Services in Iraq.

The Ibn Rushid Psychiatric Hospital in Baghdad is completely overwhelmed by the mental health issues facing the population. The hospital has two doctors and 74 beds, and is the main location for mental health treatment in the capital city. Before being destroyed during the occupation, the largest psychiatric hospital in Iraq had 1,500 beds.

Until the wars in Iraq and Afghanistan end, thousands of soldiers and millions of people across the world will continue to be affected by crippling mental health issues. And problems with veterans' health care can't be separated from problems with the civilian health care system.

With the Obama administration daily indicating that it plans to continue these wars for empire, it's equally obvious that the U.S. won't back down until it's forced to. U.S. soldiers should stand side by side with health care advocacy groups, unions and health care workers to demand that the vast sums of money being spent on waging war abroad should be used to meet health care needs at home.