We asked SocialistWorker.org readers to make their recommendations--a sort of extra-credit reading list. Here's a selection of your suggestions for books that Chávez needs to get in the hands of the U.S. president.

I would recommend Iraq: The Logic of Withdrawal by Anthony Arnove. This short and accessible book can help Obama make up his mind--and hopefully, finally withdraw all U.S. troops and private mercenaries from Iraq so that the Iraqi people can pursue their own future.
-- Hector Agredano, Santa Cruz, Calif.

Barack Obama--and more importantly, activists--must pick up a copy of Turbulent Years: A History of the American Worker 1933-1941 by Irving Bernstein to grasp the history and politics of what happened the last time liberalism was in power, the economy was in collapse, and the workers were unorganized, quiescent and divided--until all that changed.

Want hope and an idea of how consciousness in this country can shift radically left? Read this book, and you'll want to either become an organized socialist mobilizing our class or redouble your efforts, if you already are!
-- Sherry Wolf, Chicago

My suggestion is Custer Died For Your Sins by Vine DeLoria, Jr. This book tells about America from the author's Native American point of view. If you wish to learn why things are the way they are in "Indian Country," this is the book to read, as it educates and puts American history into a perspective most people have little, if any, knowledge of. This book should be required reading for all policy makers, from top to bottom.
-- David Murray, North Mankato, Minn. 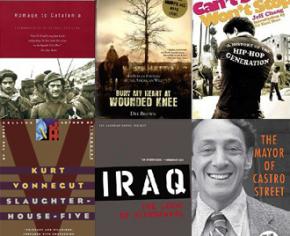 Obama's promises to be a "fierce advocate" for lesbian, gay, bisexual and transgender (LGBT) equality have fallen short--way short. The Defense of Marriage Act is still law, "don't ask don't tell" is still policy in the military, and Obama is still against same-sex marriage.

So I think he needs an education in what it really means to be a fierce advocate for gay rights. In addition to Sherry Wolf's Sexuality and Socialism that's already on the list, Obama should read The Trouble with Harry Hay: Founder of the Modern Gay Movement by Stuart Timmons; and The Mayor of Castro Street: The Life and Times of Harvey Milk by Randy Shilts.
-- Jeff Bale, Lansing, Mich.

Johnny Got His Gun by Dalton Trumbo. Obama is way too willing to use U.S. military might to secure profitable conditions (at home and abroad) for capitalists, as if he does not understand the price working people pay when their country sends them to war.

If somebody is going to lose as much as the main character in this unforgettable novel loses, there had better be a necessity for the war, other than which capitalists get to extract and sell someone else's oil and gas. Of course, the price paid by the people of the country unfortunate enough to have resources U.S. capitalists want, or the people of the country that tries to break free of the capitalist system, is much, much higher--but there are other books covering those histories.
-- Janet Arnold, Oakland, Calif.

The New Imperialism by David Harvey. Harvey's book, which explores neoliberal foreign policy and the economic and social undercurrents that prompted it, might at least help Obama to shed some light on why he is so hell bent on stirring up trouble in Pakistan. This book shows quite effectively how "self-interested" American empire is--and that interest does not at all include the American working class.

Perhaps, by the end of it, Obama will scrap the war in Afghanistan and spend the money instead on employing the destitute populations in places like Detroit, while providing health and education for their children.
-- Andrew Gilbert, Melbourne, Australia

Homage to Catalonia by George Orwell. Apart from being a brilliant account of the Spanish Civil War and the Comintern's betrayal of the international workers' movement, its chief relevance is in the two or three chapters, which show how the only way to defeat the far right is through a platform for genuine, revolutionary change (I would also include 1984, but I'm sure Obama already knows a thing or two about doublethink.)

Also, Brother in the Land by Robert Swindells is a good cautionary tale about the dangers of nuclear weapons.
-- Alan Stevenson

I would suggest Bury My Heart at Wounded Knee: An Indian History of the American West by Dee Brown, simply because it is (in my mind as an American Indian) the single-greatest examination of how my people lost the so-called "West" to the advancing United States.
-- Rowland Keshena Robinson, Waterloo, Ontario, Canada

The Struggle for Palestine, edited by Lance Selfa. While Chavez pulled his diplomats from Israel when it went on a brutal rampage against Gazan civilians in January, President Obama still refers to the "Israel-Palestine conflict" as if two equally legitimate and powerful sides just need to be pushed and persuaded into a two-state agreement.

As this book explains, Zionist settlers have been dispossessing Palestinian people and grabbing their land for more than a century--always backed by the strongest imperial powers, like the United States. If Obama wants both Palestinians and Israelis to "live in peace and security," he will need to push for the establishment of one secular, democratic state that provides equal rights to all people living in historic Palestine. Now that would be some change the Arab world could believe in.
-- Sam Bernstein, Seattle

Can't Stop Won't Stop: A History of the Hip-Hop Generation by Jeff Chang. According to some, we're living in the age of the "first hip-hop president." And indeed, Barack Obama was elected with unprecedented support from the hip-hop community.

For his part, Obama has also professed to be a fan of the genre's "spirit of entrepreneurialism," and admitted to having Jay-Z on his iPod. But in the wake of the Don Imus fiasco, Obama proved himself willing to turn the rhetorical guns on hip-hop like any other politician.

This quintessential history of hip-hop puts the record straight: that rap is a lot more complex than talk about "bling and hos." At its best, it has been an outlet for young people's hopes and dreams when nobody else would listen to them. This book belongs on the president's summer stack. If he's going to be a "hip-hop president," then it's high time he learned about the real "change" that today's youth are striving for.
-- Alexander Billet, Chicago

California: Under Corporate Rule by Peter Miguel Camejo. I'm surprised Todd Chretien didn't recommend this one, though perhaps modesty forbids (there's a big picture of him with Cindy Sheehan on the back cover).

Published during the California Greens' 2006 campaign, California Under Corporate Rule paints a picture of a state driven into multiple social, economic, and political crises by neoliberal policies. It rang plenty true to this Rhode Islander, and I suspect anyone living in a state with a non-negligible ratio of humans to space (i.e., not Alaska) will find a lot of answers in this book. If Obama wants to solve the states' problems, he'd do no better than to read what Camejo had to say.
-- Shaun Joseph, Providence, R.I.

Barack Obama excited liberals when he claimed to oppose "not only the war in Iraq, but the mindset that led us to war in the first place." Given his failure so far, Obama could use a lesson from one of the great antiwar activists of all time: Lenin.

In War On War: Lenin, The Zimmerwald Left And the Origins of Communist Internationalism, R. Craig Nation describes Lenin's struggle to rebuild an internationalist current within the Social Democratic movement. Nation discards the caricature of Lenin as a conspirator and sectarian, and makes a case for Lenin as an organizer articulating a Marxist theory of war and rallying socialists to a revolutionary alternative. For anyone interested in a world without war, this book is a must.
-- Paul Pryse, St. Louis

I would list three books: Zionism: The Real Enemy of the Jews by Alan Hart, Web of Debt by Ellen Brown and Family of Secrets by Russ Baker. These three books cover a large area of policy and are proper books on the Middle East, money and American actions of recent decades. Personally, I do not see any change at all in Obama taking over from Bush.
-- Luke Haydn Charles, Ammanford, Wales

Obama is spending billions trying to preserve a system that is not sustainable. Magnuson's book demonstrates how the growth imperative in capitalism is depleting a world of finite resources, and offers suggestions for building a sustainable, or mindful, economy.

Vonnegut's brilliant novel depicts the absurd brutality of war; its subtitle, "The Children's Crusade," is a needed reminder that the victims of war are often the young and the innocent. Obama should be reminded of the carnage of the Dresden bombing raid before he approves another air attack against the young and poor of Afghanistan and Pakistan.
-- Chuck Augello, Randolph, N.J.

On foreign policy: William Robinson's Promoting Polyarchy: Globalization, U.S. Intervention and Hegemony. This book is excellent for understanding "soft imperialism," the form preferred by liberals. Robinson uses a number of Latin American case studies, so the entire book doesn't have to be read to appreciate it.

And, while it's a little outdated with Bush out of office, still very important is Greg Grandin's Empire's Workshop: Latin America, the United States and the Rise of the New Imperialism. The book explains how structure and ideology allowed the Neocons come to prominence.

On immigration: The Politics of Immigration: Questions and Answers by Jane Guskin and David L. Wilson, and No One Is Illegal: Fighting Racism and State Violence on the U.S.-Mexico Border by Justin Akers Chacon and Mike Davis. Immigration as an issue is only going to heat up as the economy increasingly tanks and it's important for social justice activists to arm themselves with these essential resources.
-- Mike Estrada, Political Science Instructor, City College of San Francisco

Obama should read The Great Financial Crisis by John Foster Bellamy and Fred Magdoff. These essays identify the real reasons behind the current crisis: the transfer of wealth from the working class to the investor class, and the destructive chaos of capitalism's growth imperative. If Obama read this book, maybe he'd think twice about his efforts to rescue and sustain a financial system that serves the few at the expense of the many.
-- Miles Burkat, Rehobeth Beach, Del.

I'd recommend Mumia Abu-Jamal's latest book, Jailhouse Lawyers. Mumia would school Barack, in a way Harvard neither would nor could, in the contradictions of law in U.S. political struggles. He brilliantly explains exactly how the Supreme Court ruled that corporations are persons with 14th Amendment rights, and he situates his analysis of the development of the prison system in the racist logic of social control of Black labor.

As a former community organizer and professor of constitutional law, comrade Obama would deepen his understanding of why the U.S. ruling class imprisons so many Black men and why the oppressed "inside" and "outside" need to build successful movements to struggle against their oppressors.
-- Mark Clinton, Holyoke, Mass.