Worse than no bill at all

Chris Williams explains how the climate bill making its way through Congress is more focused on preserving corporate profits than the environment.

THE URGENCY for swift, practical and far-reaching action to prevent the global climate from spinning out of control and unleashing untold havoc on planetary ecosystems seems to grow with each passing scientific report.

Many people in the U.S. and across the world were inspired by President Obama's commitment during his campaign to take such action--in sharp contrast to the Bush-Cheney oil administration's outright denial of the dangers of climate change and the "drill, baby drill" war cry of the McCain-Palin campaign.

With the Democrats in control of both houses of Congress and a president formally committed to the creation of a "green economy" and millions of "green-collar" jobs, expectations were high for the bill pushed by Reps. Henry Waxman (D-Calif.) and Edward Markey (D-Mass.), the American Clean Energy and Security Act (ACES, HR 2454).

The bill is intended to restore U.S. credibility and leadership on the environment in the run-up to an international conference in Copenhagen at the end of the year that will engineer a climate treaty to supersede the Kyoto Protocol, which expires in 2012. 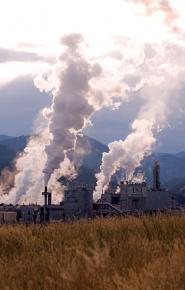 The bill was substantially watered down to make it palatable to the fossil-fuel sector and win the support of wavering Democrats from oil- and coal-producing and agricultural states. Yet it still barely scraped through the House by a 219-212 vote. The bill now heads to the Senate where it will undoubtedly lose whatever little effectiveness remains toward the goal of cutting U.S. greenhouse gas emissions.

While much has been made of the bill's promise to cut 17 percent of CO2 emissions by 2020, the baseline has been changed from 1990 (when the baseline for Kyoto began) to 2005. Therefore, in the best-case scenario--i.e., if the system actually works like it's supposed to--this represents just a 4 percent reduction of U.S. emissions from 1990.

The U.S. would therefore remain in violation of the Kyoto Protocol that George W. Bush refused to sign--hardly the leap into a brighter, greener future that is so urgently needed.

Even before the bill was substantially watered down--as demanded by various polluter lobbies--it hardly marked a serious attempt at tackling the escalating deterioration of the ecosphere or the rapidly changing climate that is primarily the result of CO2 emissions due to the unchecked burning of fossil fuels for energy, transportation, the fertilizer and bio-fuel industry and heating and cooling systems. The oil industry increased its lobbying budget 73 percent in 2008 over the previous year and spent $44.5 million in just the first three months of 2009 alone.

The first part of Chris Williams' article "Hothouse Earth: Capitalism, climate change and the fate of humanity" from the International Socialist Review is available online.

Nevertheless, the Republicans and the right wing have gone into full-throttle apoplexy about the supposed dire implications that the bill will have for the U.S. economy and American workers. To listen to them, the ACES bill is an almost existential threat to the fabric of American society.

Iain Murray wrote in the National Review that the bill represents "a 1,201-page economic suicide note." He added, "Those members of the House who vote for it are voting for long-term economic decline and for turning the United States into a second-rate economy."

Rep. Frank Lucas (R-Okla.) declared that a cap-and-trade system like the one proposed by Waxman and Markey "promises to cap our incomes, our livelihoods and our standard of living" and will therefore "hurt American agriculture." And Rep. "Smokey" Joe Barton, (R-Texas) wants the bill renamed: "They like to call it ACES, but I call it CRAP--Continue Ruining America's Prosperity."

SO WHAT is in the bill that leaves Republicans bathing in their own phlegm-soaked rhetoric of economic doom?

At the heart of the legislation lies the concept of cap-and-trade. Under this model, a ceiling or cap is placed on producers of CO2 emissions by sector. The maximum allowable amount of CO2 to be emitted is set so that companies will have an economic incentive to shift to newer, less carbon-intensive technologies and invest in alternative, "cleaner" methods of production to come in under their cap. If they do so, they can then sell their "carbon credits" in a newly created carbon-trading market to companies who exceeded their quota and would otherwise have to pay fines.

The premise is that, by turning carbon dioxide into a commodity, creating a market for what was previously regarded as an atmospheric pollutant and gradually reducing the cap over time, everyone wins--industry isn't "unfairly" penalized for producing CO2, the most dynamic, innovative industries willing to invest in "clean" technology will be rewarded by making bigger profits selling their extra carbon credits, and the environment wins because there's less carbon being emitted. The free market rides to the rescue.

In other words, a new and exciting market in derivatives is about to be launched--the very same kind of market that brought us sub-prime mortgages and other "exotic" financial instruments that resulted in the current economic collapse.

As the disaster created by neoliberalism unfolds, the question has to be asked: do we really want to extend the market into entirely new areas--areas governing our relationship to environmental stewardship and global climate?

Because carbon credits were given away for free, companies made double profits--from their own businesses and from selling their excess credits that they did nothing to earn. The cap was set so high that every company could easily come under their cap. At one point, carbon was exchanging hands for less than $1 per ton--no incentive to anyone.

In addition, through the UN's Clean Development Mechanism (CDM), a key part of the Kyoto Protocol, corporations could "offset" their carbon emissions by investing in carbon-neutral projects in developing countries, such as paying developing countries not to cut down rain forests or adopting lower-emitting technologies in new factories.

This led to extensive gaming of the market in which corporations got carbon credits for things that were already being done or were difficult to verify. The result was no net reduction in emissions, but a definite increase in profits for corporations.

The U.S. government itself released a report late last year that was highly critical of the CDM. According to the Government Accounting Office report, "Carbon offsets involve fundamental trade-offs and may not be a reliable long-term approach to climate change mitigation...It is not possible to ensure that every credit represents a real, measurable and long-term reduction in emissions."

Despite this, the ACES bill provides for $2 billion in offsets, the vast majority of which--$1.5 billion--is tagged for international projects. This essentially amounts to a license to print money--an outcome not lost on the corporations.

In reference to the European Union's disastrous record of reducing carbon emissions by cap and trade, the New York Times reported in December, "Indeed, it seems clearer by the day that while carbon trading represents a neat and economically sound solution to cutting emissions on paper, in practice it may be unleashing a new bonanza of corporate lobbying and political brinksmanship."

Ronald Bailey, Reason magazine's science correspondent, commented, "The problem with Europe is that each country got to set its own emission allocations, and the temptation to cheat was overwhelming--in fact, all of them cheated." The ETS scheme has yet to deliver any greenhouse-gas reductions, and according to the Wall Street Journal, European emissions have actually risen by 1 percent every year since 2005, when the scheme began.

DESPITE OBAMA'S vow to oppose any free permits--the one significant advantage over the European system if one is prepared to accept the extremely dubious logic of carbon-trading in the first place--the ACES bill nevertheless allows for 85 percent of them to be given away for free!

Is it any wonder that the bill was backed by some of the most-polluting fossil-fuel-based corporations on the planet: Shell, Duke Energy, Rio Tinto, DuPont, ConocoPhillips, Dow and BP? According to the Wall Street Journal, Wall Street traders called the bill's carbon markets a "huge playground" where "bucks [will] be made" and are similarly backing the bill.

On the off chance that there are any costs incurred by the fossil-fuel industry or agribusiness, they will simply pass them on to the consumer. But giving the vast majority of the permits away for free is going to make it rather difficult for Obama to raise the $15 billion per year from auctions that was supposed to go to poor Americans facing higher fuel bills.

In contrast, handouts to the coal industry continue, with the ACES bill allocating funds to the tune of $10 billion for the development of "clean coal" technologies such as Carbon Capture and Sequestration.

According to a statement released by Friends of the Earth, which alongside Greenpeace is opposing passage of the bill, it is in fact worse than no bill at all:

There's a simple reason polluting and irresponsible corporations support the Waxman-Markey bill: It showers them with hundreds of billions of dollars, but doesn't require them to reduce pollution fast enough to avoid devastating climate change impacts. Worse, the bill guts the EPA's preexisting authority to use the Clean Air Act to reduce this pollution. That means the bill is actually counterproductive--enacting it into law would be a step backward.

So the flagship environmental bill backed by Obama requires us to rely on Wall Street to "self-regulate" in a brand-new multibillion-dollar derivatives market. What we will get is a brand-new "pollution casino" and windfall profits for those corporations astute enough to learn from their European corporate friends and engage in the age-old capitalist tactic known as cheating.

While some prominent environmentalists are backing the bill as "the best realistically possible," but Michael O'Hare, quoted in the New York Times Opinionator blog, expresses how disappointing President Obama's leadership on this issue, among others, has been.

It's not easy to exaggerate just how bad this [bill] is. Waxman-Markey has been savaged on the implicit principle that climate stabilization is good, but only if no one important has to actually do anything different to accomplish it. Among the people who get a pass are anyone who burns coal, and anyone who grows corn or makes fuel out of it; I was worried months ago that a president from a coal state and a corn state might be a problem, but then he promised flatly that in his administration, science was not going to be yoked to a political ox.

Boy, is the bloom off this rose: DADT, climate and energy, transparency... "Better than Bush in some ways" is a mighty big comedown from the PR of a few months ago.

If this is Obama's idea of seriously tackling climate change, then we have some serious organizing to do to get the kind of legislation that would actually make a difference. If all he hears is the sound of corporate dollars cascading into Democratic coffers, it's clear that the earth and human, animal and plant life will come a distant second to considerations of corporate profit.

Only an independent, grassroots and militant environmental movement that consciously takes up issues of class can have any hope of forcing an alternative agenda on Washington. In light of this bill, the need to build such a movement couldn't be clearer or more urgent.