A witch-hunt of gay teachers

San Francisco teacher Adrienne Johnstone reviews a timely book about a government campaign against LGBT teachers in the 1950s and early '60s.

IN THE advertising campaign for Proposition 8 last November, a favorite right-wing argument was that if equal marriage were allowed to continue in California, vulnerable children would be taught the evils of gay marriage in schools, and teachers would be forced to promote the so-called "gay agenda."

One ridiculous advertisement featured a little girl and her mother talking about her day. "Mom, guess what I learned in school today?" the girl says. "I learned how a prince married a prince." The mother's face displayed tortured shock, and a voiceover said, "Think it can't happen? It's already happened...Teaching about gay marriage will happen unless we pass Proposition 8."

This hysteria is an echo of the scrutiny and policing of sexuality in schools that will continue until LGBT people win full equality in the U.S. And They Were Wonderful Teachers: Florida's Purge of Gay and Lesbian Teachers tells the story of the not-too-distant past where suspicion of being gay or lesbian led to secret interrogations by a government committee, revocation of teaching certificates, and prohibition from employment in schools. 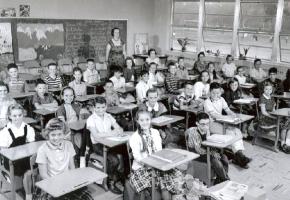 AUTHOR KAREN Graves presents a worthwhile history for both activists and educators.

Following President Dwight Eisenhower's 1953 Executive Order 10450, which banned gays and lesbians from federal employment, the state of Florida set up a special investigative committee, commonly known as the Johns Committee, which collected "evidence" against teachers suspected of being gay or lesbian.

The committee, which conducted all of its interrogations in private and denied legal counsel to the teachers brought before it, actively purged teachers from the Florida schools between 1957 and 1963. By April 1963, the committee had revoked 71 teaching certificates, with another 63 cases pending and files on another 100 "suspects."

Graves exposes the Florida purge not solely as a McCarthyite witch-hunt but also as part of the long tradition in the U.S. of attempting to regulate the lives of teachers both inside and outside the classroom.

In the early years of the 20th century, there were strict regulations against teachers "falling in love," swearing, drinking and so on. In the 1940s, 70 percent of school districts openly fired women who got married. Graves notes that, "Prohibitions against granting tenure to married women continued until the 1960s."

Karen Graves, And They Were Wonderful Teachers: Florida's Purge of Gay and Lesbian Teachers. University of Illinois Press, 2009, 216 pages, $20.

Not coincidentally, as these rules were overturned, teachers were scrutinized for appropriate gender behavior and appearance. School administrators were trained to recognizing "potential homosexuals" during job interviews.

The Johns Committee was constituted to rid Florida schools of gay and lesbian teachers who, it was claimed, could not help but recruit more homosexuals and corrupt children.

The committee openly flaunted its total disregard for the constitutional rights of the teachers that it interrogated. Statements were all claimed to be entirely "voluntary," but teachers were intimidated with publicity threats or promises to turn the case over to prosecutors if they challenged the committee's right to question them or if they requested legal counsel.

"Naming names" of gay or lesbian teachers was no protection from the committee, and would likely result in a "request" to appear before the committee for interrogation. Dubious claims of "evidence" by the Johns Committee caused some teachers to resign before they could be stripped of their license. Resignation was the only way to hold on to the possibility of securing a teaching job in another state.

The interrogations were horrifying intrusions into the private and personal sexual lives of the teachers involved. Graves quotes at length from the recently opened transcripts of the Johns Committee investigations. Here's an example of an inquiry carried out by Chief Investigator Strickland:

The secrecy that shrouded the Johns Committee operations was designed to catch teachers off guard, giving them no warning of the interrogation and no opportunity to prepare defenses. Teachers, mostly women, were often brought alone into a room with the chief investigator, lead council and the local superintendent of schools.

The interrogations most often took place at the local school headquarters or in the local sheriff's department. Interrogated out of public view, teachers could feel nothing but total isolation, with little chance for resistance of any kind. In fact, Graves explains how the Florida Education Association, which ostensibly represented teachers, aided the Johns Committee and the state board of education every step of the way, naming names and providing "evidence" to assist in the "cleansing" of its ranks.

There are instances of individual bravery in the face of interrogations--teachers who deliberately misled the committee with their responses and teachers who refused to implicate others. In general, however, outside support for the interrogated teachers was almost nonexistent.

Graves notes one exception from the African American residents of Bay County, Fla., who hired an attorney and demanded reinstatement for a local African American teacher who was dismissed for being gay in 1962. They wrote, "'If we had a dozen persons with the love and interest of our people as [this teacher has]--this would be a community second to none.'"

WHILE THE Johns Committee officially folded in July 1965, the damage had already been done. The task of purging gay and lesbian teachers passed to the Florida Department of Education and was standard practice in the state until the 1970s. Florida legislators proposed new laws to require fingerprinting and surveillance of all state employees, discontinuation of retirement benefits for fired gay and lesbian workers and mass arrests of gay people.

This all took place prior to the advances won by the gay rights movements of the post-Stonewall era. So the teachers called before the panel appeared alone, with no public support and no criticism of the relentless persecution they were facing. The dominant view of homosexuality was one of disease and psychological impairment.

The Mattachine Review never wrote about the Florida teacher purge and critiqued attacks on University of Florida gay professors as a "faulty approach" to the "psychological problem of the homosexual." Only the gay magazine One gave any space to a critique of the Johns Committee, but stopped short of calling for the right of gay and lesbian people to teach children.

It wouldn't be until San Francisco's bold victory against the 1978 Proposition 6, also known as the Briggs Initiative, that gays, lesbians and their supporters felt the wind of a movement at their back and the confidence to put forward the right of gay and lesbian people to work in that most scrutinized of public spheres, the local school.

Whether protecting our right to work and to be out and proud, or asserting our right to teach justice and equality in our classrooms, teachers and schools are continuously under the microscope. We can be glad that today we have a growing movement for LGBT rights, unlike the teachers in Graves' book, who had neither the law nor the movements on their side in the late 1950s.

Job and housing discrimination against gay and lesbian people continues to be entirely legal from a federal standpoint. Nineteen states have no laws that protect from employment discrimination based on sexual preference or gender identification. The struggle that Graves uncovers with her book continues.

As she writes, "To control teachers is to control the dominant ideology." This book reveals that we will have to fight to have any hope of controlling our own futures.