Has feminism made women unhappy?

Elizabeth Schulte exposes the hype surrounding a new study claiming to show that women are unhappier than they were 30 years ago.

HERE WE go again. Another study is out to show how the women's movement ruined women's lives.

This time it's called "The Paradox of Declining Female Happiness," and it's being used by self-help guru Marcus Buckingham to claim--over three decades after the height of the women's rights movement--that "though women now have the liberty to choose whichever life they'd like, many are struggling in their pursuit of a happy life."

The survey by Betsey Stevenson and Justin Wolfers at the Wharton School is an analysis of General Social Survey data, which attempts to track Americans' feelings. Each year since 1972, the U.S. General Social Survey has asked 1,500 men and women, "How happy are you, on a scale of 1 to 3, with 3 being very happy, and 1 being not too happy?"

The result prompted bloggers like Buckingham to ask: Did feminism help men more than it helped women? As Buckingham writes: 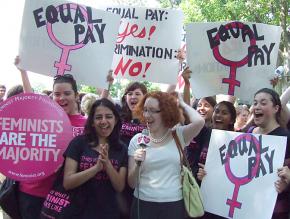 Imagine it is 1969 ...imagine stopping a working woman on Detroit's Woodward Avenue, perhaps a young bank clerk, and asking if she would cast her mind forward, decades into the future...

Given all the evidence of women running corporations and universities, hospitals, media empires, branches of government, army divisions, and countries, do you think women in the future will be happier? Of course they will be happier, she would have said. With all these opportunities and achievements, how could they not be?

Well, as it turns out, too easily.

It's no mystery why the author of self-help books with titles like Find Your Strongest Life: What the Happiest and Most Successful Women Do Differently is pointing out all the ways women are unhappy. In his series of blog posts for the Huffington Post, Buckingham--who the Web site calls a "leading expert in personal strengths"--provides a series of handy hints and aphorisms to unhappy women and an introduction to his new "Strong Life Test."

Regardless of the questionable accuracy of a poll that asks people whether they are "happy" or not, the study is the latest lightning rod for commentary about today's so-called post-feminist era.

Read Katha Pollitt's response to the furor over women's declining happiness in her Nation article "Are you happy?" Barbara Ehrenreich's response at TomDispatch "Are Women Getting Sadder?" is another must-read.

For an excellent history of the women's rights movement and what has happened to feminism since, check out SocialistWorker.org columnist Sharon Smith's book Women and Socialism. Smith makes a timely case for a new movement for "Defending abortion rights" in the International Socialist Review.

Jen Roesch's article "Turning Back the Clock? Women, Work and Family Today" provides useful analysis of the period after the women's movement of the late 1960s and early '70s.

In May, Ross Douthat used the study to claim that the problem is single motherhood has become accepted. "There's no necessary reason why feminists and cultural conservatives can't join forces--in the same way that they made common cause during the pornography wars of the 1980s--behind a social revolution that ostracizes serial baby-daddies and trophy-wife collectors as thoroughly as the 'fallen women' of a more patriarchal age," Douthat wrote in the New York Times.

Commenting on the study, Times columnist Maureen Dowd mused about what she calls a "paradox" of choices that women have today: "Stevenson looks on the bright side of the dark trend, suggesting that happiness is beside the point. We're happy to have our newfound abundance of choices, she said, even if those choices end up making us unhappier."

SOMEWHERE BENEATH all this babble lies an obvious truth--women did benefit from the fact that there was a struggle for our equality in the 1960s and 1970s.

In order for women--or anyone, for that matter--to be "happy" or "fulfilled," a prerequisite is that they have certain freedoms. The liberation movements of the 1960s won important rights that had been denied to them before--for women to make decision about their personal lives without the consent of their fathers and husbands, for example, like whether to become mothers or where they should work.

The women's movement made concrete gains. It's important to recall that women weren't allowed to have their own credit without a male cosigner or acquire birth control without being married. Airline management regularly measured flight attendants, who could be fired for not making weight requirement or being too old or getting married.

If women are unhappy, the culprit isn't the women's liberation movement.

Katha Pollitt raises an important point: Maybe the declining numbers of women who consider themselves happy--which is, by the way, fairly small--represents women who are unhappy not because these victories were won in the past, but because they are being pushed back in the present. As Pollitt points out in the Nation:

After all, women moving into higher education and the workforce is not the only thing that has happened in the past 30 years. If you want to play ridiculous numbers games, it could be that feminist gains have made women 10 percent happier, but something else--the fraying of the safety net, the turbo-charged misogyny of pop culture, reading too many self-help books--has canceled it out.

By and large, when the media writes stories about the plight of modern women cursed by the era of women's liberation, they are focusing on a small section of women at the top of society. Precious little ink is used to discuss the happiness or personal fulfillment of working-class and poor women (or working-class and poor men for that matter).

In 2003, New York Times writer Lisa Belkin came up with the term "opt-out generation" to describe a group of Princeton women who left their fast track to career success after they had children.

The trend, of course, turned out to be bunk--six years later, Census data shows that stay-at-home mothers are, by and large, neither Princeton educated nor on the fast track. According to statistics released in October, the educational level of nearly one in five mothers at home was less than a high school degree, as compared with one in 12 other mothers. Some 12 percent of stay-at-home moms live below the poverty line, compared with 5 percent of other mothers.

Mothers at home appear to be "the more vulnerable women, for whom I would argue the issue is lack of opportunity," sociologist Pamela Stone of Hunter College told the Washington Post. "They have a hard time finding a job and finding a job that makes work worth it."

Alongside these figures is the reality, too, that the chances of a "revolution" of stay-at-home mothers taking place are exceptionally low, considering that U.S. society depends on women working outside the home (and inside at the same time). Even in the 1950s, the myth of the happy housewife applied to a fairly narrow section of the population. In 1956, for instance, 70 percent of families in the $7,000 to $15,000 range had at least two workers in the family, and the second worker was usually a woman.

While self-help gurus like Buckingham aren't concerned about it, the reality of everyday life for working-class and poor women is a difficult one today. According to the Economic Policy Institute's State of Working America 2008-2009, "women are much more likely to earn poverty-level wages than men. In 2007, 31.4 percent of women earned poverty-level wages or less, significantly more than the share of men (21.8 percent)."

As the economy worsens, women have been forced to make harder choices about their personal lives. Researchers at the Guttmacher Institute found that because of current economic crisis, nearly half of women surveyed wanted to delay pregnancy or limit the number of children they have.

But at the same time, their financial situations were working against women's ability to act on these decisions. "[F]or many, economic hardship means having to skimp on their contraceptive use, for example, by stretching their monthly supply of pills or shifting to a less expensive method--or not using birth control at all--in order to save money," Guttmacher reported in September.

Add onto these conditions the assault on women's right to choose abortion and the growing acceptance of sexism in the entertainment industry in this "post-feminist" era, and it's no wonder that a growing number of women aren't simply unhappy, but angry.

OBVIOUSLY, WHAT we need isn't advice from a self-help guru, but a fighting movement for women's liberation. During the much-maligned women's movement of the 1960s and '70s, actions demanding greater freedoms for women played an invaluable role in giving women the confidence to demand more.

A small example of an action organized by Women Employed in 1977 gives a sense of how contagious the demand for equality could be. Iris Rivera, a legal secretary at a Chicago law firm, had been fired for refusing the order to make coffee every morning, arguing, "I don't drink coffee, it's not listed as one of my job duties, and ordering the secretaries to fix the coffee is carrying the role of homemaker too far."

Women Employed organized a protest to demand her job back. Sara Evans describes the scene in the book Tidal Wave: How Women Changed America at Century's End: "Protesters presented the lawyers with a bag of used coffee grounds and a flyer on how to make your own coffee. Step 5 was 'Turn switch to on. This is the most difficult step, but with practice, even an attorney can master it.'"

The protest was splashed all over the media, "sparking debates and small revolutions in thousand of offices," writes Evans. And Iris Rivera got her job back.

During this period, women and men took part in numerous struggles that raised demands for the equality of women in society--protesting sexual harassment at work, demanding pay equity, gaining access to legal and safe abortion, and challenging the forced sterilization of poor women.

If these are examples of the kind of "damage" done to women by the movement of the 1960s and '70s, then a new wave of damage is in order.