Alan Maass unravels the deceptions and hidden motives in the government and media response to the plot to set off a bomb on a plane bound for Detroit.

THE ATTEMPT by a 23-year-old Nigerian man to explode a bomb on a Detroit-bound airplane has become the excuse for a return to some of the worst "war on terror" hysteria of the post-September 11 period.

Umar Farouk Abdulmutallab boarded Northwest Flight 253 in Amsterdam on December 25, apparently with the components of an explosive device hidden in his underwear. As the plane approached Detroit, he tried to set it off. Passengers and crew members subdued Abdulmutallab and put out the fire he started before the explosives detonated.

Immediately, the mainstream media shifted into overdrive. "Terrorism experts" filled hours of airtime on cable TV news networks with speculation about an al-Qaeda connection, based on reports that Abdulmutallab had traveled to Yemen in August to go to language school, and instead devoted himself to studying Islam at a mosque with a radical reputation.

All the more reason, according to the "war on terror" cheerleaders, for systematic racial profiling of Muslims and Arabs; the use of torture against Abdulmutallab and any other suspect; and immediate military retaliation against Yemen, which is now, we're told, the hub of al-Qaeda's operations. 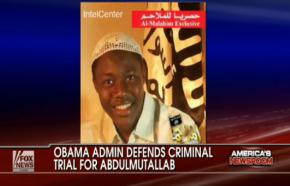 Republican Sen. Jim DeMint denounced the Obama administration's "soft talk about engagement, closing Gitmo--these things are not going to appease the terrorists." Terrorizer-in-chief Dick Cheney scrambled to a microphone to pronounce, "[W]e are at war, and when President Obama pretends we aren't, it makes us less safe."

The White House and Democrats in Congress responded by doing somersaults to look tough. Obama returned from his vacation in Hawaii with promises that he would "get to the bottom" of why the bomb plot wasn't foiled before it happened. Rep. Jane Harman, a top Democrat on the House Homeland Security Committee, declared that the administration should review plans to release innocent Yemeni detainees from the U.S. prison camp at Guantánamo Bay.

But the bipartisan panic--in response to a primitive bomb plot that thankfully was thwarted by the plane's passengers--only seems to grow more crazed as the days pass.

Over the weekend, retired Lt. Gen. Thomas McInerney appeared on Fox News to propose that authorities strip-search every 18- to 28-year-old Muslim man who boards an airplane, within the U.S. or traveling to it. "And if we don't do that," McInerney said, "there's a very high probability we're going to lose an airplane."

The Fox anchor did manage to reply, "That's a bit strong"--but only because, she said, "That's just not going to go over, not in this country."

You could listen to Fox and the other news networks for hours and never hear a single person deviate from the unspoken assumption--that terrorist acts are committed only by young Muslim men.

THERE WAS something else missing from the mainstream media coverage of the bomb plot--any real discussion of the actions of a far better organized force than al-Qaeda, with much greater resources and the capacity for violence on an incomparably vast scale.

In other words, the U.S. military.

"From what I can gather," wrote Salon.com's Glenn Greenwald, "the principal New Year's wish of our media class is that we will bomb and occupy more Muslim countries in 2010, and that nobody in any of those countries will try to bring any violence to us in return. What a truly bizarre expectation."

As Greenwald points out, the U.S. "war on terror" is being fought not only in Iraq and Afghanistan, but increasingly in Pakistan, Yemen and Somalia, with Predator drone air strikes and covert and not-so-covert operations. Add to these five countries actively in the U.S. crosshairs the actions of America's Middle East watchdog, Israel, in threatening death and destruction across the Middle East and continually causing them against Palestinians. Then there's the ongoing U.S. saber-rattling against Iran and Washington's support for authoritarian Arab regimes like Egypt.

Every atrocity and act of repression carried out in these occupations or operations or interventions deepens bitterness and hatred toward the U.S. among people who most likely had nothing to do with Osama bin Laden or al-Qaeda. As Greenwald wrote:

[W]e are constantly delivering death to the Muslim world. We do not see it very much, but they certainly do. Again, independent of justification, what do we think is going to happen if we continuously invade, occupy and bomb Muslim countries, and arm and enable others to do so? Isn't it obvious that our five-front actions are going to cause at least some Muslims--subjected to constant images of American troops in their world and dead Muslim civilians at our hands, even if unintended--to want to return the violence?

Just look at the bloodthirsty sentiments unleashed among Americans even from a failed terrorist attempt [on Christmas Day]. What sentiments do we think we're unleashing from a decade-long (and continuing and increasing) multi-front "war" in the Muslim war?

THE SCAREMONGERS didn't wait around before renewing their war cries against al-Qaeda. But a week and a half after the bomb plot failed, there wasn't even that much hard evidence of Abdulmutallab's ties to al-Qaeda.

In his weekend radio address, Barack Obama said: "We know that he traveled to Yemen, a country grappling with crushing poverty and deadly insurgencies. It appears that he joined an affiliate of al-Qaeda, and that this group--al-Qaeda in the Arabian Peninsula--trained him, equipped him with those explosives and directed him to attack that plane headed for America."

The only statement of fact there is that Abdulmutallab traveled to Yemen. The phrase "it appears" signals that what follows is guesswork.

In fact, the best information about Abdulmutallab was available to U.S. officials before the 23-year-old got on a plane to the U.S. Abdulmutallab's father, a retired banker, contacted the U.S. Embassy in Nigeria to say that his son had cut off contact during his extended stay in Yemen. He told two CIA agents that his son had been drawn to "extreme religious views," and one of his last text messages read: "You should just forget about me, I'm never coming back."

Abdulmutallab's name was added to a broad watch list, but not to a more specific one where he might have been flagged when he bought a plane ticket to the U.S.--for cash--in mid-December.

Even assuming that Abdulmutallab did contact the faction of al-Qaeda centered in Yemen, it's not a high-tech operation with big resources--or even many members. Estimates of the size of the al-Qaeda affiliate in Yemen seemed to expand in press reports as the days went on to as high as 200. But that's still a tiny fraction of Yemen's population of 23.6 million.

Compared to the vast conspiracies spun out by "terrorism experts" on the news shows, Abdulmutallab's bomb plot was crude. It required no coordination or collaboration, even to the level of the September 11 attacks--just some basic supplies available in most countries in the world, including the U.S., and the luck to evade detection by airport security.

"The real strength of al-Qaeda," wrote Independent journalist Patrick Cockburn, "is not that it can 'train' a fanatical Nigerian student to sew explosives into his underpants, but that it can provoke an exaggerated U.S. response to every botched attack."

The Obama administration is running to form with its frantic measures to increase security and stepped-up plans for military operations in Yemen. This is another aspect of the "war on terror"--partnering with repressive regimes in the name of fighting violence and intolerance.

The government of Yemen is notoriously corrupt and brutal. It is one of the few countries in the world with a record of executions to rival the U.S., and one where the CIA rendition program sent detainees to be tortured by an allied regime. Yemeni military forces have been happy to collaborate with U.S. "war on terror" operations, especially when this furthers the government's ongoing campaigns against opposition groups in the north and secessionists in the south.

But Obama says he's "made it a priority to strengthen our partnership with the Yemeni government, training and equipping their security forces, sharing intelligence and working with them."

The U.S. gave Yemen $67 million for training and support as part of the Pentagon's counterterrorism program last year--only the Pakistani government received more. And according to Gen. David Petraeus, who was sent by Obama to Yemen to meet with government officials last week, that figure will more than double in 2010, to around $150 million, as long as Congress approves.

What will these massive sums accomplish, besides add to the body count in the "war on terror" and the Yemeni government's own war on its opponents? Umar Farouk Abdulmutallab's own father provided the U.S. government with all the information it needed to stop the bomb plot, and that went unheeded.

The truth is that "war on terror" isn't about keeping Americans or anyone else safe from violence. On the contrary, it has made the world a far more dangerous place.

When political leaders demand ever-greater repressive measures in the name of security, they are taking a politically convenient path to avoid being labeled "soft" on terrorism. But there's a deeper purpose--to legitimize the use of government repression and shred more of our rights.

The scaremongering has an effect, too. According to a Rasmussen poll, 58 percent of people say Abdulmutallab should be subjected to waterboarding and other forms of torture to get him to reveal more information. This is the legacy of a concerted campaign by the political and media establishment to whip up hostility toward Arabs and Muslims, while keeping the crimes committed by the U.S. government in the Middle East hidden.

If Barack Obama or anyone else in the U.S. government cared about real safety and security, they would stop the air strikes in Yemen, end the occupations of Iraq and Afghanistan now, offer reparations for America's war on Muslims and the Middle East, and promote democracy and civil liberties at home and around the world as the only guarantees against tyranny and oppression.

The latest terror scare is being used to do the opposite. The right-wing wants to stampede U.S. citizens into surrendering more of their civil liberties and endorsing another military foray in the Middle East--and liberals like Barack Obama are eager to go along. We can't let U.S. politics be hijacked by those who cynically use every terrorist attempt to clamp down on our rights and get a green light for war.