John Green, a teacher in California, looks at the facts about Arnold Schwarzenegger's new budget proposal--and explains how easy it would be to protect our schools.

"As bitter as the words are in my mouth, we face additional cuts...But I am drawing this line. Because our future economic well-being is so dependent upon education, I will protect education funding in this budget. And we can no longer afford to cut higher education either."
-- Gov. Arnold Schwarzenegger, State of the State address, January 6, 2010

APPARENTLY, GOV. Arnold Schwarzenegger and I interpret the word "protect" differently, because two days later, he released his proposed 2010-11 budget that includes at least $1.8 billion in direct cuts to K-12 schools.

Did he raise our expectations just so that his actual announcement would hurt that much more? No wonder a new poll puts his popularity at 27 percent.

The governor's proposals are a bit baffling, but here's an outline.

The negative COLA proposal will amount to about $250 per student, which is equal to the so-called "one-time" cut of $252.83 per pupil that school districts endured last year. In other words, this cut completely throws out all of last year's local budget scenarios and predictions. 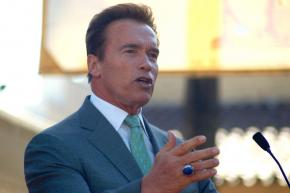 This "chop from the top" proposal doesn't specify cutting outrageous superintendent salaries--only a reduction in funds for central offices. Will low-level administrators simply be bumped into school sites and dislocate younger teachers? What about districts that initiated some sort of central office cuts last year already?

3. $300 million reduction by eliminating barriers to "contracting out."

In other words, the governor wants to make it easier for school districts to bypass unionized employees (and their pesky collective-bargaining agreements) by contracting for services from outside providers. Most likely, this will mean taking on SEIU and CSEA, who represent classified employees such as custodians and secretaries.

California's voter-approved Proposition 98 guarantees that a minimum of 40 percent of the state's general fund be spent on K-14 education. Cold comfort while the general fund shrinks each year, but Gov. Schwarzenegger still proposes to eliminate the state's gas tax in favor of a "fee," causing gasoline sales revenue to bypass the general fund altogether.

5. Additional "flexibilities" inspired by the Obama administration's Race to the Top funds.

The governor's budget proposes to eliminate seniority in layoffs, transfers and rehires; eliminate laid-off teachers' first priority for substitute assignments; and reduce the school year by up to five days. Simply put, seniority rights protect older employees from being targeted due to union activity or earning higher pay.

THESE PROPOSALS make clear that any attempt to "ride out" the storm just won't work. Not only is this strategy insulting to teachers facing layoffs right now and students losing out on an education, but California is getting ready to permanently dismantle fundamental rights of teachers.

It is worth mentioning that the bulk of Mr. Schwarzenegger's cuts this time around target health and human services. As our kids' lives neither begin nor end at the classroom door, the loss of quality welfare programs in California will hurt children just the same as laying off school employees.

Last year's federal stimulus legislation offset some of the education cuts in California. We deserve a lot more help, like the kind of money that's been thrown at Wall Street and the wars in Iraq and Afghanistan.

Both of California's senators are ranking Democrats, and House Speaker Nancy Pelosi hails from San Francisco. Political pundits think California has zero chance of netting any federal funds (Mr. Schwarzenegger is relying on at least $6.8 billion), which is absolutely ridiculous. Whatever cuts occur this year, there will be plenty of blame to go around politicians of both parties.

Proposition 13 also needs to be repealed. It requires a two-thirds vote to raise taxes, but only a simple majority to reduce them. It requires a two-thirds vote to accept a budget, allowing the Republican minority to hold everyone hostage and giving the Democratic majority a convenient object to blame for the crisis, while sidestepping the issue of seriously raising taxes on the wealthy.

Why eliminate school days when we could eliminate Proposition 13? Why pull funding from school districts when we should pull out of Afghanistan? Why raise a generation of children with a broken education system when we could just raise taxes on the wealthy?

This is obviously a tall order, so here's a place to start: The March 4 statewide day of action to defend public education. Initiated by student activists, and now supported by both the California Federation of Teachers and California Teachers Association, this could become the biggest day of resistance we've seen so far.

Now is the perfect time to ask our local unions to endorse March 4 and set up organizing committees to turn out educators, parents and students for protest and discussion.