The Obama administration has given the go-ahead to offshore oil drilling--despite the risk to the land, water and wildlife along hundreds of miles of U.S. coastline.

WASN'T IT Barack Obama who, a year and a half ago, mocked rivals John McCain and Sarah Palin for the frenzied chants of "Drill, baby, drill" at their rallies?

"What kind of slogan is that?" Obama told a Flint, Mich., crowd. "I can see if you're cheerleaders for Exxon Mobil, but that's not a vision for the American future."

Now, Obama is president, and he's announced his own version of "drill, baby, drill": Plans to open up the U.S. shoreline--from the northern tip of Delaware to the central coast of Florida, and the north coast of Alaska--to oil and natural gas drilling, much of it for the very first time.

"This is not a decision that I've made lightly," Obama said last week. "But the bottom line is this: given our energy needs, in order to sustain economic growth, produce jobs and keep our businesses competitive, we're going to need to harness traditional sources of fuel even as we ramp up production of new sources of renewable, homegrown energy."

However heavily considered the decision was, the Obama administration has given the go-ahead for what could be a tremendous danger to millions of acres of U.S. coastlines. 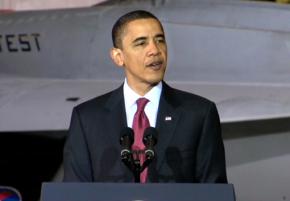 In just the past decade, an estimated 1 billion gallons of oil has been spilled into oceans around the world. Plus, the areas on the north coast of Alaska that were opened to drilling by Obama--the Chukchi Sea and Beaufort Sea--are especially vulnerable to climate change right now. Drilling would only worsen the impact.

Not only that, but the White House used the goal of "energy independence" to explain its giveaway to the oil industry--the same language used for years by conservatives to justify policies that put the interests of Big Oil first.

According to political commentators, Obama's decision on offshore drilling is a tradeoff. The administration hopes to gain support from Republicans for energy legislation under consideration in Congress. Apparently, it's worth opening up millions of acres of formerly protected shoreline to drilling if that means supposedly progressive policies in the energy bill, like caps on carbon emissions, would get through Congress.

But the administration's pro-market "cap and trade" proposal means leaving the polluters to trade the right to pollute, with no guarantee that this would result in any significant reduction in carbon dioxide emissions. In fact, environmentalists doubt that the cap-and-trade system will produce significant reductions in greenhouse gases, even if it works as promised.

And if the one-sided negotiations during the writing of the health care law are any indication, Republicans won't be moved by the Democrats' surrender on offshore drilling to sign on to the energy bill as a whole.

In fact, it appears that Obama's announcement was aimed more at Democrats. The climate and energy bill drafted by the bipartisan team of Sens. John Kerry, Joe Lieberman and Lindsey Graham would open up 600 million acres of coastline for drilling, and would reportedly let states decide whether to permit drilling within 35 miles of their coasts. States that opt in would get a cut of the profits.

Several Democratic senators are jumping at the chance--among them, Mary Landrieu of Louisiana and Mark Begich of Alaska. "It will benefit no Alaskan to slow the advance of climate change's effects if no one can afford to rebuild their eroding village, meet a payroll or heat their home," Begich wrote in a letter to Senate Majority Leader Harry Reid.

EVEN SETTING aside the ecological impact, the Obama administration's offshore drilling policy fails miserably on its own narrow terms--of solving the problem of dwindling energy resources.

According to projections by the U.S. Energy Information Administration, "[A]ccess to the Pacific, Atlantic and eastern Gulf [offshore] regions would not have a significant impact on domestic crude oil and natural gas production or prices before 2030." Even then, drilling on the previously protected portions of the outer continental shelf would cut gas prices by just three cents, according to estimates.

[The U.S.] accounts for 23 percent of total world oil consumption, but has only 3 percent the world's oil reserves within its borders. Drilling off every coast in the U.S. won't resolve that issue. Even the most productive portion of the area opened to drilling, the eastern Gulf, is expected to yield only 3.5 billion barrels of oil. The U.S. consumes 19.5 million barrels of oil per day, which means that these wells would only produce about 180 days worth of oil.

The Obama administration's drilling announcement can't come as too much of a surprise--Democrats have been working up to it.

In October 2008, Congress, with a Democratic majority in both houses, let a decades-old moratorium on offshore drilling expire. Months before, the Bush administration had lifted an executive order--put in place by George Bush Sr.--that banned offshore exploration. Obama could have issued his own order when took office, but he didn't.

In his State of the Union address, Obama--right after vowing to build a "new generation of safe, clean nuclear power plants"--declared that his administration would make the "tough decisions about opening new offshore areas for oil and gas development."

The same "tough-mindedness" was on display in Copenhagen last December at the international climate summit. After promising to rescue of initiatives to cut greenhouse gas emissions, including in the U.S., Obama arrived at the summit with proposals that fell pathetically short of what's needed to slow global warming.

After Obama's announcement about offshore drilling, Interior Secretary Ken Salazar painted the plan as a "compromise," between the Republicans' "drill, baby, drill" mantra and what he called the "unreasonable" stance of environmental groups.

But there shouldn't be any "compromise" on protecting the environment. Instead of pursing truly reasonable policies--imposing tough curbs on corporate polluters, taxing the oil giants, devoting much more money to researching alternative energy--the Obama administration let the oil companies call the shots.

Big Oil's interest is in squeezing every drop they can from the coastlines, no matter the environmental impact, until it isn't profitable anymore.

We should speak out against this giveaway--of the future of land, water and wildlife, from one end of the U.S. to the other--to Corporate America.