Arizona’s apartheid and the struggle to end it

For those who want to show their anger with SB 1070, it's time to start organizing.

ANTI-IMMIGRANT lawmakers in Arizona are trying to take their state backward half a century to a time when an apartheid system reigned across the U.S. South. But their "Juan Crow" law has stirred a furious response across the country and revived the movement to win equality and justice for immigrants.

In their arrogance, the racists went too far--and now millions of people are saying: Enough is enough.

SB 1070 does nothing less than enshrine racial profiling in state law. It is now a crime in Arizona to not be carrying immigration paperwork. Police are required, if they "suspect" someone is in the country without documentation, to determine that person's immigration status--and if law enforcement and government officials don't comply with the law, Arizona citizens are empowered to sue.

Republican Gov. Jan Brewer claims that the law won't lead to police stopping people just because they look like they are Latino. But Brewer can't explain what would prevent this from happening. That's because racial profiling is the essence of SB 1070. 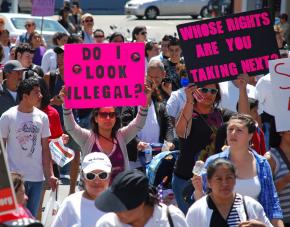 The law resembles a state version of the notorious Sensenbrenner bill that was proposed at the federal level in 2005. That legislation, known by its House designation HR 4437, sought to criminalize not only the 12 million undocumented people in the U.S., but anyone who aided them. Similarly, Arizona's law has a provision targeting not only day laborers seeking work, but also anyone who picks up a day laborer.

SB 1070 isn't a surprise coming from the Arizona state government. The state is home to immigrant-bashing Sheriff Joe Arpaio of Maricopa County. In addition to increasingly repressive anti-immigrant laws, the legislature recently passed a bill requiring Barack Obama to show his birth certificate in order to get on the state ballot for president again in 2012. Not too many years ago, Arizona was notorious as one of the last bastions of the racist opposition to a federal holiday commemorating Dr. Martin Luther King.

Arizona's racial profiling law is the latest chapter in a long history of racist hate and bigotry. And so this outrage has to be countered the same way injustice has ever been--with protest and struggle.

THE PASSAGE of the law was met by an eruption of opposition. In Arizona itself, there were daily protests in Phoenix, Tucson and other cities from the moment Gov. Jan Brewer signed the legislation, with hundreds of high school students walking out of classes. The demonstrations conveyed a bitterness that the law had passed, but also an electric spirit of defiance.

The response was also immediate and wide-ranging around the country. Activists for immigrant rights immediately began to plan for protests. Calls for boycotts of anything to do with Arizona spread rapidly--with the encouragement of an Arizona congressman, Rep. Raul Grijalva, who had to close his office in Phoenix on the same day the bill became law because of death threats.

One of the first expressions of national dissent against SB 1070 came outside baseball stadiums, wherever the Arizona Diamondbacks, owned by a right-winger who supports the state Republicans behind SB 1070, were playing.

On Monday, the San Diego City Council became the first local government body to pass a resolution calling for repeal of Arizona's racist law. But it won't be the last--similar proposals have been unveiled around the country.

The May Day demonstrations for immigrant rights--already given a boost in March with the 200,000-strong march in Washington, D.C.--were much bigger in nearly every city, as veteran and first-time marchers came out to vent their anger at the racial profiling law. On every march, there were handmade signs reading "Todos somos Arizona" ("We are all Arizona").

Initiatives that would step up the struggle are planned for the weeks and months ahead. Rev. Al Sharpton's National Action Network has vowed to organize "freedom walkers" to challenge the law, just as the "freedom riders" challenged Jim Crow segregation 50 years ago. The Mexican American Political Association is planning for "mass campaigns of non-cooperation and non-participation," according to leading immigrant rights activist Nativo López.

By challenging a vicious law with direct action and civil disobedience, these campaigns have the potential to not only galvanize anger at Arizona's racial profiling law, but provide a focus for opponents of injustice of every kind.

But no one who wants to show their anger with Arizona needs to wait. We can take action locally now.

On campuses and in communities, activists can get started building boycott committees that bring together people who want to take a stand. Speakouts on college and high school campuses can spread the word about the struggle and reach out to people who want to get involved. Unions and community organization should pass resolutions supporting the boycott and the struggle against the racial profiling law.

SB 1070 is part of a strategy of the right wing to claim that there is a crisis of "illegal immigration," and to focus attention on the undocumented. This is scapegoating, pure and simple--an attempt to shift the blame, in the midst of an economic crisis that is still hitting working people hard, away from the banksters and corporate executives who caused it.

But the angry and widespread opposition to SB 1070 shows that the right's anti-immigrant hysteria can be challenged. If we mobilize now against the racial profiling law, we have an opportunity to take on the myths and lies of the immigrant bashers and build a stronger movement for justice.

ARIZONA'S RACIAL profiling law will shake up U.S. politics, and not only on the issue of immigration.

President Obama and the Democrats were quick to denounce the law. Obama called it "misguided" and promised that the Justice Department would "examine the civil rights and other implications."

But Obama has the power to do much more than criticize SB 1070. He could order the Immigration and Customs Enforcement (ICE) agency not to cooperate with Arizona's state government as it seeks to implement racial profiling. He could put a moratorium on federal immigration enforcement programs--such as E-Verify or the 287(g) program that allows the federal government to deputize state and local law enforcement agencies on immigration issues--until SB 1070 is repealed.

As the fight against Arizona's racial profiling law develops, the Obama administration should feel pressure to back up its words with action--in the same way that civil rights movement activists in the 1950s and 1960s put pressure on the federal government to intervene against the racist power structure of the Jim Crow South.

That's why Republican President Dwight Eisenhower had to mobilize federal troops when activists set out to desegregate public schools in Little Rock, Ark.--and why Democrat John F. Kennedy was forced to send federal marshals to defend civil rights activists from the violence of the racists.

Unfortunately, Obama's record in office has been a disappointment to supporters of immigrant rights.

Though he promised during the 2008 presidential campaign to make a priority of fixing what he called a "broken" immigration system, Obama has repeatedly put off any effort to build support for measures that would improve the lives of immigrants. In the meanwhile, his administration escalated the war on the undocumented--ICE raids have come at a faster pace even than during the Bush administration.

Thus, on May Day, many protesters who expressed their anger at Arizona's racial profiling law also vented frustration at the administration's continuing emphasis on immigration enforcement--and its inaction on reform.

This bill is the worst "bipartisan compromise" yet. Among other things, it would increase funding for border security and harsh enforcement measures; force all workers--native and foreign-born alike--to carry a biometric national identity card to prove authorization to work; and create a guest-worker program open to abuse by employers. Although the proposal includes a "path to legalization," it is filled with overwhelming obstacles--for example, undocumented workers would have to pay fines and back taxes, and perform "community service."

Schumer-Graham is being seen as the realistic alternative for immigration legislation, compared to a proposal put forward earlier this year by Rep. Luis Gutierrez--which, while reflecting a number of demands of immigrant rights activists, nevertheless still contains unjust enforcement measures.

Activists whose hopes were raised by the Gutierrez proposal are now being faced with a take-it-or-leave-it proposition: support Graham-Schumer or you'll get nothing at all.

And now, Arizona's racist law--and the threat of copycat legislation, under consideration in a dozen other statehouses--will be used from the other direction: to pressure supporters of genuine reform to accept Schumer-Graham as a way of stopping the right's hard-line assault.

A similar dynamic played out with the Sensenbrenner bill in 2005 and 2006. The massive mobilizations of spring 2006 sealed the fate of HR 4437, but the threat of it was used to build support for similarly "bipartisan" proposals that pandered to the right's demands for enforcement, while including a tortured path to legal status for just some of the undocumented.

The challenge to Schumer-Graham and the Washington mentality of enforcement-first-and-legalization-for-a-few-much-later will have to come from below. But that's exactly where the fight against Arizona's apartheid has welled up.

The swelling opposition to Arizona's racial profiling law is an opportunity for supporters of immigrant rights to organize our forces, build a struggle that can push back an attack by the right, and put forward our case for real immigration reform--legalization and equal rights for all immigrant workers. Everyone who stands for justice and civil rights should get involved in this fight.