Diana Macasa describes how a federal government program for immigration enforcement is affecting San Francisco--and stoking a grassroots movement to defy it.

FOR THE past two years, with the help of Mayor Gavin Newsom, local law enforcement and the federal government's Immigration and Customs Enforcement (ICE) agency have collaborated to chip away at San Francisco's sanctuary city status.

Now, that status has been effectively overturned with the city's implementation of the federal program "Secure Communities" program, which went into effect on June 8, 2010.

Ironically, the federal program goes into effect after Newsom and the San Francisco Board of Supervisors passed a resolution to Boycott Arizona, as a way of showing their opposition to the racist law SB 1070. But it's clear that Secure Communities is another version of SB 1070--an anti-immigrant measure that promotes racial profiling and could radically increase the number of deportations of undocumented immigrants, leading to more families torn apart.

The federal program, under the direction of ICE, requires local law enforcement to cross-check digital fingerprints of anyone they arrest against a federal database to evaluate the arrested person's immigration status. If ICE determines the arrested person to be undocumented, that person will be detained by ICE and processed for deportation. 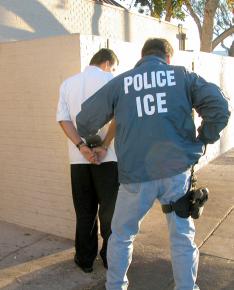 ICE claims that Secure Communities targets undocumented immigrants who have been arrested for felony offenses, but the program doesn't explicitly say that non-felony arrests are exempt from the program. This opens the door for local law enforcement to arrest people they suspect of being undocumented to cross-check fingerprints against the ICE database.

In other words, Secure Communities encourages the same racial profiling and fast-track to deportation that SB 1070 does.

At a protest in front of the ICE building in San Francisco, Bobbi Lopez, a community organizer with the Tenderloin Housing Clinic, explained, "What folks don't realize is that when we talk about arrests, arrests equal traffic citations. So not having a drivers' license is a deportable offense against Secure Communities. Not having all the permits necessary where people are selling food is potentially a deportable offense."

In November 2009, ICE released statistics on the impact of the Secure Communities program nationally, and they confirmed Lopez's point. Only 10 percent of the 110,000 people identified through Secure Communities were suspected felons, which means that most digital fingerprints ran through the database were people arrested for minor offenses. Additionally, the program carries a relatively high error rate--5 percent of the people reported to be undocumented actually had papers.

To make matters worse, immigrants detained under the Secure Communities program won't have the right to due process to challenge their arrest, nor do they have a right to appeal their detention or deportation. Once an arrested person is determined to be undocumented, they are immediately turned over to ICE to be processed for being sent out of the country.

Under this program, everyone is guilty--even if you can prove that you're innocent.

SECURE COMMUNITIES was launched in 2008, and there are presently 17 counties in California and 20 states that have voluntarily signed on. The program is expected to be implemented in all jurisdictions in all 50 states by 2013. President Obama and Congress have allocated $1.4 billion for this program as part of their commitment to ramping up the deportation of immigrants.

In San Francisco, there was opposition against Secure Communities--specifically from Sheriff Michael Hennessey, who wanted to opt out of the program on the grounds that it would undermine San Francisco's status as a sanctuary city for immigrants. Current sanctuary city policy allows for local law enforcement to turn over anyone undocumented to ICE if they have been convicted of a felony.

California Attorney General Jerry Brown, who is running for governor, rejected Hennessey's request to opt out, maintaining that Secure Communities "serves public safety and the interest of justice."

In addition, the San Francisco Board of Supervisors passed a nonbinding resolution declaring its opposition to Secure Communities and urging local law enforcement to not participate.

Still, though opposition exists at the top, not enough was done to stop the implementation of Secure Communities. In San Francisco, the fightback is just beginning, and immigrant rights activists are ready to put ICE, the Obama administration and Democrats who support this program on notice.

On June 1, the day that Secure Communities was originally scheduled to be implemented in the city, the San Francisco Immigrant Rights Defense Committee organized a protest of around 70 activists in front of the ICE building in San Francisco to demand "No to S-Comm in SF, no to S-Comm anywhere."

Bobbi Lopez set the tone of the protest by sending a clear message to the people implementing this program: "We need to remind the Democratic Party and elected officials that we as immigrants, we as Latinos, we as Asian-Americans, we as Arab-Americans, we as the rainbow that is California, will not stand for racial profiling and the harassment of undocumented workers."

The June 1 demonstration came on the heels of the May 29 National Day of Action Against SB 1070, and San Francisco activists are consciously connecting the fightback against Secure Communities with the struggle to overturn SB 1070--because they are two faces of the same enforcement apparatus.

Brian Cruz of Service Employees International Union Local 1021 and a participant of the San Francisco Arizona Caravan on the National Day of Action Against SB1070 highlighted the connections:

A grassroots struggle is emerging in San Francisco against Secure Communities and SB 1070, with many different groups involved. A town hall organized by the Freedom Bus Coalition--groups and individuals who organized a caravan from San Francisco to Arizona for the May 29 Day of Action--is scheduled for June 20.

Activists in San Francisco understand these two measures will affect the livelihood of all immigrants, documented and undocumented--so we will fight together to restore San Francisco's sanctuary city status.