A “get out of jail free” card for Wall Street

AS MEMBERS of the House of Representatives and Senate patch together a final version of financial reform legislation, it's increasingly clear that Wall Street and its army of lobbyists have won the battle to keep the bill from making any real changes in how America's biggest banks do business.

That means there will be nothing to prevent banks from taking the kinds of risks that could lead to another 2008-style financial flameout. And if that happens, there will be no alternative to the federal government conducting another taxpayer-funded bailout of the Wall Street fat cats. "[A]t the end of the day, essentially nothing in the entire legislation will reduce the potential for massive system risk as we head into the next credit cycle," wrote Simon Johnson in a recent blog post.

Different versions of financial reform legislation passed the House and Senate earlier this year. Both were incredibly weak compared to what was expected after the 2008 Wall Street crash pushed the economy into a recession. 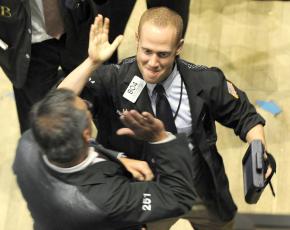 But now, with lawmakers from both houses working through the "conference" process that resolves differences between the two bills, already feeble legislation is being further gutted, with lobbyists from the banking industry pushing members of both parties to remove every provision they find objectionable.

At this point, it appears that the final bill will do nothing to limit the size of "too big to fail" banks. It won't regulate credit default swaps--the form of financial insurance on investments going bad that was at the heart of the 2008 crisis. It will have only modest measures to make more transparent the trading of Wall Street's massively complicated investments known as derivatives.

The legislation will do nothing to change Wall Street's bonus culture. It won't force a re-separation of commercial and investment banking that existed under the Glass-Steagall Act passed after the 1929 Wall Street crash. The law won't stop predatory lending and doesn't provide for mortgage reform.

And if the lobbyists get their way, it's possible that whatever regulations do end up in the final version may not even be enacted for another seven years.

EVEN THE most discussed provisions of the legislation are withering away to nothing.

For example, the so-called Volcker rule--a proposal made by former Federal Reserve Chair Paul Volcker to bar banks from making investments not on behalf of customers and from sponsoring or participating in hedge funds and private equity funds--appears to be on the way out as negotiations continue.

Incredibly, the legislation may end up giving banks more leeway to operate hedge funds than they had before. As the bill stands now, banks would be allowed to invest up to 2 percent of core capital, composed of common stock and financial reserves, in hedge funds and private equity funds. The big banks might have to divest some holdings to get below that threshold, but they won't have to get out of the hedge fund business entirely.

As a sign that the rule will actually expand the banks' ability to speculate, Goldman Sachs, Citigroup and JPMorgan Chase are all rapidly trying to line up deals to acquire additional hedge funds in anticipation of the bill's passage. JPMorgan is reportedly working on buying the Brazilian asset management firm Gávea Investments, and Citigroup is about to raise $3 billion to expand its hedge fund and private equity units.

The much-hyped consumer protection agency is expected to make it into the final bill. The agency is supposed to help protect borrowers from predatory products. But it will be overseen by the Federal Reserve--which answers directly to the banks.

Moreover, according to reports, language in the legislation will make 8,000 of the nation's 8,200 banks exempt from agency oversight. Also at issue in the negotiations is whether to exempt auto dealers from regulation. Ultimately, the agency will have no real power.

In addition, the banks and their lobbyists were able to remove the proposal for a bailout fund. At one point, there was a plan to create a $150 billion fund--paid for by large financial institutions--that would be available if another rescue of the financial system was necessary.

But that provision was jettisoned this week. Instead, the bill will require "regulators to certify they have a plan to pay for liquidations after the fact," reported the Los Angeles Times. That's a meaningless rule--and it means that when the financial system crashes again, taxpayers will be on the hook.

The legislation also won't force banks to maintain higher capital reserves. Late Wednesday, Senate and House lawmakers said the final bill would limit banks to a debt-to-equity ratio of 15-to-1--meaning that for every $1 in capital held by a bank, it could have $15 in debt.

At the peak of the boom years, some Wall Street banks had leverage ratios of 30- or 40-to-1. But the 15-to-1 cap is hardly tough. On the day it filed for bankruptcy, the former investment bank Lehman Brothers was leveraged somewhere between 8-to-1 and 10-to-1.

When it comes to the complex financial gambles that Wall Street calls derivatives, the House and Senate are still debating final language, but it's likely that the stringent idea of requiring all derivatives to be traded on regulated exchanges and forcing banks to shed their derivatives businesses--which was included in the final Senate version of the legislation--will be dropped.

From all indications, the bill will be so watered down that it will have almost no effect on how Wall Street functions. "Wall Street has always been very skilled at getting around rules, and this law will be no exception," Frank Partnoy, a law professor at the University of San Diego and former trader at Morgan Stanley, told the New York Times. "Once you open up the door just a crack, Wall Street shoves the door open and runs right through it."

Congress is racing to get the legislation ready before this weekend's G-20 summit in Canada. The Obama administration wants to use the bill as a talking point when world leaders discuss the world economy and the measures that governments will take in the coming months.

But Washington's weak reform will be a warning to other nations not to enact any strict reforms themselves. If they do, international banks will recognize just how generous conditions in the U.S. remain.

HOW DID it come to this? How could Wall Street end up emerging from the worst financial crisis since the Great Depression on stronger footing?

Firstly, the Obama administration clearly waited too long to push for financial reforms. The time to enact changes would have been right after Obama took office in 2009. Wall Street was on life support and owed its survival to the government's bailout--it couldn't have fought off changes at that point.

By waiting--and by nursing banks back to profitability with more than $14 trillion in loans, guarantees and direct infusions of cash--the government gave Wall Street time to consolidate and prepare to defeat tougher reform measures.

That delay begs the question of whether the Obama administration really wanted to reform Wall Street in the first place.

Secondly, the incestuous relationship between Wall Street and Washington meant that Congress had no interest in bringing the hammer down on the financial sector. As Sen. Dick Durbin said last April, "[T]he banks--hard to believe in a time when we're facing a banking crisis that many of the banks created--are still the most powerful lobby on Capitol Hill. And they frankly own the place."

So it should be no surprise that Congress is bending to the immense lobbying effort that the banks have undertaken.

On top of that, there's the revolving-door culture between Wall Street and Washington. This is true at the highest levels, where the post of Treasury Secretary is often filled by former Wall Street executives. But it's true lower down as well--at least 56 industry lobbyists have served on the personal staffs of the 43 Senate and House members shaping the legislation in the conference committee negotiations, according to Public Citizen.

Moreover, the members of the conference committee have received more than $112 million over the past 20 years from political action committees or employees of industries affected by the legislation. These 43 lawmakers are just 8 percent of Congress, but have received 16 percent of Wall Street's donations, according to the Center for Responsive Politics.

Overall, since 1989, the finance, insurance and real estate sector has poured $695 million into the campaign committees and political action committees of current members of Congress.

For its part, the Obama administration offered a lot of empty rhetoric in the lead-up to the final bill's unveiling. The president has talked up "strong oversight of derivatives" even while White House and Treasury officials argued behind the scenes to gut the provisions that made it this far. As Simon Johnson wrote:

Simply claiming that the president is "tough" on big banks simply will not wash. There are too many facts, too much accumulated evidence, pointing exactly the other way. The president signed off on the most generous and least conditional bailout in world financial history. This is now widely understood. The administration has scrambled to create some political cover in terms of "reform"--but the lack of substance here is already clear to people who follow it closely, and public perceptions will shift quickly.

In the end, no matter how obvious it is that the big banks bear responsibility for the financial system's crash, Wall Street--predictably--wasn't willing to give up its profits or powers without a fight.

That's a fight we can't trust Barack Obama and the Democrats to take up. Only by building a grassroots movement for economic justice can we pressure Washington to act--and put a leash on Wall Street.