The new challenge to Israeli apartheid

The spreading campaign for boycott, divestment and sanctions against Israel has the potential to focus the world's attention on the crimes against the Palestinian people.

ISRAEL ANNOUNCED an easing of its blockade of Gaza and charges against several soldiers who participated in Israel's 2008-09 assault on Gaza in a carefully timed move designed to placate critics one day ahead of Prime Minister Benjamin Netanyahu's meeting this week with Barack Obama.

But the new policy is far from the end to the blockade that human rights activists and international aid agencies have demanded.

Now, in the wake of Israel's assault on the Gaza Freedom Flotilla, the growing international solidarity movement--centered around a campaign for boycott, divestment and sanctions (BDS) against Israel--is gaining new allies and picking up momentum. It deserves the determined support of everyone committed to seeing justice in the Middle East and around the world.

The immediate backdrop to the latest maneuvers is the deadly assault on a flotilla of ships carrying humanitarian supplies to Gaza. Israel was left scrambling to contain the diplomatic fallout and the threat of further international isolation, as well as the first signs of diminished support within U.S. foreign policy circles. 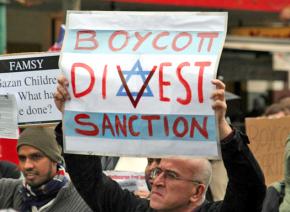 To this end, Israel issued a list of items that it will ban from Gaza--a reversal of its previous policy of allowing in only items on a "whitelist" of approved imports.

Tony Blair, Britain's Middle East envoy, heralded the new policy as a major advance. "These changes are significant and, once implemented, should have a dramatic influence on the daily lives of the people of Gaza and on the private sector," said Blair.

But while Israel is lifting restrictions on most consumer goods, it is maintaining its ban on cement, fertilizer and steel unless Israel approves of the projects for which they are intended. "Can you imagine how many years it would take to negotiate [the passage of] the tens of thousands of truckloads needed to rebuild Gaza?" Sari Bashi, executive director of the Israeli charity Gisha, told Britain's Independent newspaper.

Israel also appears set to continue its ban on exports from Gaza, which has strangled the economy and led to unemployment rates of more than 50 percent.

Nevertheless, Obama emerged from talks with Netanyahu praising Israel for easing the siege and insisting that Netanyahu is serious about peace.

Never mind that a few months ago, Netanyahu declared Israel would never withdraw from critical areas of Jerusalem and the West Bank that for years have been seen as the basis of "peace" negotiations--and that he has categorically ruled out any apology to Turkey for killing nine Turkish citizens aboard the freedom flotilla. Or that Avigdor Lieberman, Netanyahu's foreign minister, declared that there is "no chance" Israel will extend its freeze on settlement building.

Israel's siege of Gaza, settlement building, home demolitions, grab of Palestinian water resources, use of collective punishment and continued construction of a separation wall deemed illegal by the International Court of Justice amount to serial violations of international law.

These violations have gone on for decades, and the U.S. government has done nothing--except to bankroll and arm Israel to the extent that it is now in the front rank of the world's most powerful militaries.

WITH THESE flagrant violations of international law--combined with the U.S. complicity that allows Israel to get away with them--what can be done to achieve justice for the Palestinian people?

For the first time in decades, many Palestinian organizations and activists see a reason for hope: Their longstanding call for a comprehensive BDS campaign against Israel is gathering momentum.

Modeling their campaign on the movement against South Africa's apartheid system in the 1980s--another rogue state that defied international law and violated the human rights of its citizens for decades--Palestinian civil society organizations turned to a BDS movement after the official international community failed to take any meaningful action against Israel.

In the weeks since the assault on the Gaza flotilla, the BDS movement has chalked up a number of victories--large and small.

Last month, some 1,500 dockworkers at ports across Sweden refused to work with cargo to and from Israel, and a few days later, 1,000 activists set up a picket line at the Port of Oakland that was honored by dockworkers, preventing an Israeli ship from being unloaded for 24 hours.

In June, Britain's UNISON union, which represents some 1.4 million service-sector workers, passed a motion supporting "an economic, cultural and sporting boycott of Israel" in solidarity with "the scores of unions around the world who have endorsed the Palestinian call for boycott, divestment and sanctions against Israel." The motion further declared "that as an immediate sanction for the illegal attack on the flotilla, we call on the government to expel the Israeli ambassador."

Also in recent weeks, a growing list of musicians has refused to play concerts in Israel. Gil Scott-Heron canceled the Israeli stop of his world tour, as have the Pixies and Massive Attack. Elvis Costello also canceled his upcoming two-day tour stop in Israel and issued a statement that reads in part:

One lives in hope that music is more than mere noise, filling up idle time, whether intending to elate or lament. Then there are occasions when merely having your name added to a concert schedule may be interpreted as a political act that resonates more than anything that might be sung, and, it may be assumed, that one has no mind for the suffering of the innocent...I cannot imagine receiving another invitation to perform in Israel, which is a matter of regret, but I can imagine a better time when I would not be writing this.

These victories follow on other campaigns that have been building for some time. An early responder to the BDS call, the Presbyterian Church, began a phased divestment process against five companies in 2005, and the Methodist Church followed soon after.

In early 2009, activists mounted BDS campaigns on several U.S. campuses. Students for Justice in Palestine at Hampshire College succeeded in pressuring the administration to divest from six companies complicit in Israel's illegal occupation.

More recently, the student body at Evergreen State College--alma mater of solidarity activist Rachel Corrie, who was killed trying to stop an Israeli bulldozer from demolishing a Palestinian home--passed two resolutions: The first calls on the "Evergreen State College Foundation to divest from companies that profit from Israel's illegal occupation of Palestine," and the second demands the school "ban the use of Caterpillar, Inc. equipment from campus." Caterpillar supplies Israel with the bulldozers used for house demolitions.

The student body at the University of California-Berkeley passed a resolution endorsing the divestment of university funds from General Electric and United Technologies, both of which profit from Israel's occupation. But the student senate fell just one vote short of overriding an executive veto of the resolution.

Still, even when they haven't yet succeeded in their specific demands, BDS activism exposes new groups of people to the reality of Israel's cruel treatment of Palestinians. Thus, Code Pink's Stolen Beauty campaign to boycott Ahava beauty products, which are produced in West Bank settlements, has spread the message of the solidarity movement.

THIS IS the reason that the global BDS campaign is causing Israel's defenders such heartburn. Asher Fredman, a commentator for the Israeli newspaper Yediot Ahronot, characterized the BDS movement as a "soft war" against Israel. As Fredman wrote:

In many ways, the number of campaigns which achieve their goal is less important than the perception that the movement as a whole is gaining ground. This perception generates legitimacy for the soft war, entices others to jump on the bandwagon and can become a self-fulfilling prophecy...The point that must be internalized is that the soft war constitutes not simply a nuisance or even an economic threat. It is a process that could play a major role in shaping the future status quo between Israel and the Palestinians.

In the U.S., home to Israel's chief sources of diplomatic, economic and military support, there is no shortage of opponents to BDS organizing. For example, the American Israel Public Affairs Committee (AIPAC) has always vilified anyone who raises even mild criticisms of Israel.

But during the pushback against Berkeley's BDS activists, AIPAC was joined by its supposed rivals: J Street, a Capitol Hill-based lobbying group that sees itself as the peaceful alternative to the AIPAC hawks.

J Street, like other pro-Israel "friends" of the Palestinian cause, rejects the BDS movement as "simplistic" or even "dangerous." Instead, the group asserts that the issue's "complexity should be reflected in the dialogue on campus, rather than singling out one side or another for condemnation and punishment."

In fact, J Street exposed what its formulation means in practice during the battle at Berkeley. Working alongside Berkeley Hillel, the Anti-Defamation League, AIPAC, the Jewish Community Relations Council and Israel's consul general in San Francisco, J Street chose not to explore "complexity," but joined in a campaign that included "circulating anti-divestment talking points [urging] students to reframe the debate as an attack on the Jewish community and to avoid talking about the particulars of the Israel-Palestine conflict," according to a report on the BDS movement in the Nation.

Such tactics are typical of pro-Israel advocates: Deride advocates of Palestinian national rights for being simplistic, insist that there are two sides to the story, and label those who refuse to drop their criticisms as anti-Semites who are creating a "hostile climate."

But there aren't two equal "sides" in the Israel-Palestine conflict. There is a colonizer and the colonized.

The growing BDS movement has the potential to focus the world's attention on Israel's repeated violation of basic human rights and international law.

Among those who advocate BDS, there are any number of political differences--about the nature of the Israel-Palestine conflict and its ultimate solutions; whether Israel can be called an apartheid state; whether to focus BDS efforts on only those Israeli enterprises and investments directly linked to the occupation of the West Bank or Gaza or to use a wider lens.

The strength of the movement will depend on these questions being posed and discussed while the different currents work together toward common goals.

As on so many issues, the U.S. population is far to the left of its elected representatives on this question. While the vast majority of Congress signed an AIPAC letter supporting Israel's flotilla assault, a leaked survey by Republican pollster Frank Luntz found that only 34 percent of Americans backed the Israeli operation and only 20 percent of Americans "felt support" for Israel following its announcement that it would ease the siege of Gaza.

While the flotillas and land convoys to Gaza are set to continue this fall, the BDS campaign gives everyone an opportunity to participate in a movement against Israel's apartheid--wherever they live and whatever they do.

The movement to win justice for Palestinian national rights stands at a crossroads. What happens next depends on our efforts. As Martin Luther King wrote in his book Why We Can't Wait: "Freedom is never voluntarily given by the oppressor; it must be demanded by the oppressed."