ROLLING STONE reporter Michael Hastings' article "The Runaway General" shocked many with its on-the-record comments from Gen. Stanley McChrystal and his "team" deriding President Obama and Vice President Joe Biden, as well as speaking frankly about the dismal state of the war in Afghanistan.

The fallout from the article left McChrystal out of a job, military officials defending their handling of the war and Obama pledging that the U.S. is in Afghanistan for the long haul.

But there was another reaction to Hastings' article--a loud chorus of establishment journalists who were critical of Hastings for having the audacity to print McChrystal's comments.

In other words, for doing his job.

Several right-wing Republicans came to McChrystal's defense. According to perpetual crank Sen. James Inhofe (R-Okla.), "It's regrettable that it all happened through Rolling Stone, I think that's the main problem there, and I still can't figure out how that happened."

That attitude is no surprise from a right-wing politician, but it was appalling how many journalists piled on as well, faulting Hastings and Rolling Stone for daring to print what McChrystal and his flunkies actually said about the war and the Obama administration. 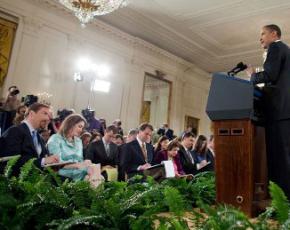 New York Times columnist David Brooks attacked Hastings, lamenting the disappearance of a "culture of reticence" among reporters--in which politicians and military figures had their so-called "private kvetching" protected. Today, he said, this has been replaced by "an ethos of exposure."

Rich Lowry, editor of the right-wing National Review, was incredulous that Rolling Stone could even break such a story. Later, he deemed the piece "lackluster and very antiwar," "very defeatist," and full of "hilarious overwriting about McChrystal."

Hilarious overwriting? As Vanity Fair blogger Barrett Brown pointed out, Lowry is the same man who wrote of Sarah Palin in 2008: "I'm sure I'm not the only male in America who, when Palin dropped her first wink, sat up a little straighter on the couch and said, 'Hey, I think she just winked at me.'"

Right-wing blowhard Bill O'Reilly chimed in on his show, calling Hastings a "weasel with a capital 'W.'" And, speaking of weasels, Geraldo Rivera, appearing as a guest on the O'Reilly Factor, one-upped O'Reilly by comparing Hastings to...al-Qaeda terrorists:

Two days before 9/11, two al-Qaeda terrorists posing as journalists got up to Sheik Massoud, our most valuable ally in Afghanistan. They blew themselves and Sheik Massoud up. A tremendous setback.

I maintain historically that the removal of General McChrystal at the hands of this freelance reporter for Rolling Stone has almost comparable strategic significance...[Y]ou have an obligation and honorable obligation to check out such comments before you rush to the press, knowing that you have done is removing a fine soldier who has risked his life for his country time and time again.

This from a man who was booted out of Iraq in 2003 after he described and drew a diagram of U.S. troop movements for the cameras.

WHILE O'Reilly and Lowry can be easily dismissed as the partisan hacks they are, criticism of Hastings wasn't limited to the right.

New York Times London bureau chief John Burns lamented the impact Hastings' story will have on other members of the press:

I think it's very unfortunate that it has impacted, and will impact so adversely, on what had been pretty good military/media relations...You build up a kind of trust. It's not explicit, it's just there. And my feeling is that it's the responsibility of the reporter to judge in those circumstances what is fairly reportable, and what is not, and to go beyond that, what it is necessary to report.

Even worse was CBS News Chief Foreign Correspondent Lara Logan. Appearing on CNN's Reliable Sources program in a segment immediately after Hastings was interviewed by host Howard Kurtz, Logan began by saying that she didn't believe that Hastings' interviews with McChrystal and his team were on the record.

When asked by Howard Kurtz if there is an "unspoken agreement that you're not going to embarrass [the troops] by reporting insults and banter," Logan replied, "Absolutely. Yes...there is an element of trust."

Logan also mocked Hastings for having said earlier to Kurtz that part of his role as a reporter was to build trust with his interviewees so that they speak openly to him: "That is exactly the kind of damaging type of attitude that makes it difficult for reporters who are genuine about what they do, who don't--I don't go around in my personal life pretending to be one thing and then being something else. I mean, I find it egregious that anyone would do that in their professional life."

In response to Hastings' comment that reporters like Logan who are assigned to cover the military don't publish negative pieces about their subjects in order to assure continued access, Logan called Hastings "insulting and arrogant."

"Michael Hastings appeared in Baghdad fairly late on the scene, and he was there for a significant period of time...And to be fair to the military, if they believe that a piece is balanced, they will let you back," she added.

Finally, she said, "Michael Hastings has never served his country the way McChrystal has."

In other words, according to Logan, not only did Hastings "cheat" by making off-the-record comments public (a claim for which there is no basis), but he should have, at the very least, censored what went into the article in order to protect not only McChrystal, a supposed "hero," but the overall relationship between the media and the military.

Such an attitude lays bare the idea that the mainstream media is in any way "neutral." To hear journalists like Burns and Logan whine about the supposed "damage" that Hastings has done to their "relationship" with the military only exposes their view of their role as journalists--and it certainly isn't to be a watchdog.

Shouldn't the public have the right to know when a senior advisor to the commander of U.S. troops in Afghanistan--now the longest war in U.S. history--states, "If Americans pulled back and started paying attention to this war, it would become even less popular"? Isn't it important for us know that McChrystal himself, referring to "the biggest military operation of the year--a ferocious offensive that began in February to retake the southern town of Marja"--called the battle a "bleeding ulcer"?

the Pentagon does have perhaps the single largest public relations apparatus on earth--spending $4.7 billion on p.r. in 2009 alone and employing 27,000 people, a staff nearly as large as the 30,000-person State Department--but is that really enough to ensure positive coverage in a society armed with a constitutionally guaranteed free press?

And true, most of the major TV outlets are completely in the bag for the Pentagon, with two of them (NBC/GE and Logan's own CBS, until recently owned by Westinghouse, one of the world's largest nuclear weapons manufacturers) having operated for years as leaders in both the broadcast media and weapons-making businesses.

But is that enough to guarantee a level playing field? Can a general really feel safe that Americans will get the right message when the only tools he has at his disposal are a $5 billion p.r. budget and the near-total acquiescence of all the major media companies, some of whom happen to be the Pentagon's biggest contractors?

THAT HASTINGS disagrees with Logan about how a reporter should act is partly a reflection of his own experiences as a working journalist.

As Vanity Fair blogger Barrett Brown pointed out, Hastings has seen firsthand what "establishment journalism" has meant in covering the wars in Iraq and Afghanistan, as well as politics here at home.

Hastings had been the Baghdad correspondent for Newsweek. In 2007, his fiancée, Andi Parhamovich, a civilian consulting with an NGO in Baghdad, was killed in an ambush, and Hastings later wrote a book about their experiences in Iraq and her death. As Brown noted:

In 2008, that mediocre publication assigned him to cover our republic's most recent and ridiculous electoral contest, and as a consequence the fellow got an insider's view of how terribly destructive is the manner in which this country covers its most important decisions.

This sentiment is widespread among the more observant media professionals, who generally do not act on it out of concern for their own careers. In contrast, Hastings quit Newsweek and wrote a damning exposé about what he had seen and experienced during his stint. During a time in which many journalists thought of little more than how they would attain security for themselves, Hastings ensured that he would never be trusted by the establishment media ever again.

That exposé, "Hack: Confession of a Presidential Campaign Reporter", is especially telling for the fact that Hastings begins the piece by dismissing the idea of "objectivity"--a notion which is more often used to excuse the media holding back criticisms of those in power.

After unapologetically describing former New York City Mayor and presidential contender Rudy Giuliani as "a maniac," Hastings blasts the role of the journalists on the campaign trail:

If that sounds like I had some trouble being "objective," I did. Objectivity is a fallacy. In campaign reporting more than any other kind of press coverage, reporters aren't just covering a story, they're a part of it--influencing outcomes, setting expectations, framing candidates--and despite what they tell themselves, it's impossible to both be a part of the action and report on it objectively...

In my case, it was easy to despise Rudy. I'd spent two years covering the war in Iraq. I had a brother who was currently deployed there as an infantry platoon leader, and I had Iraqi friends who were now living as refugees. To listen to a man so casually invoke violence and warfare--a man who'd never set foot in Iraq or in any war zone--was troubling indeed.

NOW, HASTINGS--by performing his job and writing a story that shed real light on the attitudes of those in charge of the war (not to mention the human cost of the policies the U.S. government is pursuing)--has become a pariah among the mainstream media.

The truth is that the mythical "liberal media elite" that the right wing can be heard complaining about so often bears almost no resemblance to reality.

More common are attitudes like those of former Washington Post owner Katharine Graham who, at a meeting at CIA headquarters in 1988, stated, "We live in a dirty and dangerous world. There are some things the general public does not need to know and shouldn't. I believe democracy flourishes when the government can take legitimate steps to keep its secrets and when the press can decide whether to print what it knows."

In other words, our right to know extends only so far as someone like Graham decides it should. When someone like Michael Hastings operates by a different standard, it's the exception, not the rule.

As Hastings said in an interview with the Huffington Post's Marcus Baram:

I went into journalism to do journalism, not advertising. My views are critical, but that shouldn't be mistaken for hostile--I'm just not a stenographer. There is a body of work that shows how I view these issues, but that was hard-earned through experience, not something I learned going to a cocktail party on fucking K Street [the center of Washington lobbying].

That's what reporters are supposed to do: report the story.