SocialistWorker.org contributor Jesse Hagopian is a teacher in Seattle who lost his jobs due to budget cuts and a founding member of the progressive union caucus Social Equality Educators within the Seattle Education Association. Here, he describes an unexpected meeting with a pupil who badly needs to be educated on the facts about our schools.

As I locked eyes and firmly shook hands, I wondered if my years of teaching would be enough to help the freshman Secretary of Education gain the knowledge and skills he would need.

Arne Duncan had come to the Seattle area on July 9 to address Aviation High School, and his visit happened to coincide with the American Federation of Teachers (AFT) convention taking place in Seattle. I joined the picket of teachers from the AFT who had journeyed to the high school with signs such as "Race to the Top: First place business, last place students."

As we rallied outside the high school, the event planners grew nervous that we would disrupt this stage-managed affair. They offered us a meeting with one of Duncan's aides in exchange for our polite behavior during his address. We agreed, and after the event were escorted to a nearby classroom for the meeting.

When an aide entered the room and told us, "The Secretary will come meet with you soon," I assumed he meant one of Duncan's clerical assistants would come write down our concerns. But a few minutes later, Secretary Duncan himself entered the classroom and took a seat in the center of the room, with us educators fanned out around him. 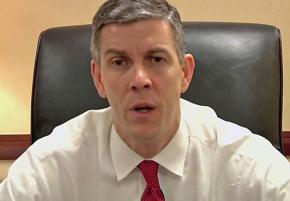 WE TEACHERS pooled our collective experience that day to construct, on the fly, what turned out to be a comprehensive "lesson plan" for the schooling of Arne Duncan, driven by the essential question: "What is a quality education?" Our lesson was complete with a pre-assessment, a multi-stage lesson plan targeted at Arne's deficiencies, a concluding summative assessment and an intervention plan for follow-up assistance--not unlike what we would do with any other student at risk of failure.

Our pre-assessment of Arne's skills was based on years of following Arne's speeches, writings and public policies--all of which have culminated in his "Race to the Top" initiative (RTTT) and his national "turnaround plan."

RTTT is tied to a $4.3 billion fund to make states compete for desperately needed education money by using eligibility requirements to push for charter schools--schools publicly funded by taxpayers, yet run privately, outside the control of local school boards--and merit pay schemes where teachers are paid according to student test scores. Arne's turnaround plan proposes closing some 5,000 schools across the county and firing entire teaching staffs at schools perceived to be failing.

These national initiatives were first developed by Arne in his role as CEO of the Chicago Public Schools (where he served from 2001-2008) for his "Renaissance 2010" program that consisted of closing down dozens of schools, predominately in Black neighborhoods, and converting many to charter schools or military academies.

At numerous school board meetings and protests, teachers, students and community members warned Duncan that the reckless closing of schools would have dire consequences--from the loss of cherished neighborhood schools and union teachers to an increase in gang violence.

Predictably, these education advocates were proven right. Student achievement stagnated, and deadly violence soared in the schools--with some 34 deaths and 290 shootings in 2009 as a result of students being transported to schools across gang boundaries.

A study by the University of Chicago's Consortium on Chicago School Research released in October 2009 examined the academic effects of the closings on students at 18 elementary schools shut down between 2001 and 2006. The study concluded that the vast majority of students went from one low-performing school to another, with no achievement gains--and in fact, even saw temporary decreases in test scores during the stressful period when the announcement of their school being slated for closing was made.

Moreover, a massive study by Stanford University, looking at data covering some 70 percent of all charter school students nationally, found that bad charter schools outnumber good ones by a ratio of roughly 2 to 1--and an astonishing 83 percent of charter schools were either no better, or worse than, traditional public schools.

The performance pay experiment that Duncan imposed on the Chicago Public Schools, known as the "Teacher Advancement Program," had equally dismal results.

Merit pay schemes have long been criticized by teachers' unions and education advocates for driving teachers to narrow the curriculum to cover only what is assessed on tests--and for pitting teachers against each other for a limited pool of money, thus breaking down teacher collaboration and creating disincentives for educators to share effective teaching techniques.

A report issued last May by Mathematica Policy Research on the merit-pay program that Arne initiated in Chicago reveals that paying teachers according to test scores didn't increase student achievement whatsoever.

Thus, every major initiative that Arne Duncan is currently advocating on a national level has been shown by non-partisan research institutions to be ineffective at best.

ONE TEACHER from Detroit opened our meeting with Arne by summarizing the results of our "pre-assessment," saying, "What you are doing is stepping up privatization, charterization, and segregation and inequality...and you know that."

Our "lesson" then began by providing context to our essential question: What is a quality education?

I explained that I was a seventh-grade humanities teacher in the Seattle Public Schools until the budget cuts hit, and I was laid off. I then expressed my displeasure with his decision to reject a call from Congress to tap some of the Race to the Top funds in order to save some of the projected 200,000 to 300,000 teaching jobs that will be cut in the upcoming school year.

What follows is the transcription (taken from my audio recording) of our exchange. Note that I use the "Socratic seminar" teaching method that stresses asking open-ended questions to allow for the student to develop High Order Thinking skills, such as analysis, evaluation and creativity:

Mr. Hagopian: I really need an answer to my questions about the recent Stanford study that was funded by the Walton Family. As soon as that study showed that charters underperformed public schools, I don't know why you didn't change policy.

Mr. Hagopian: I've heard that response that you have given, but what still doesn't make sense to me is...that the problem with charters is that you put public funds under private control. So if public schools on the whole are outperforming charter schools on the whole, then why don't we use the system where public funds stay under public control, and then we bring in innovation and resources to the public schools?...What is the advantage of charters?

Arne: There is nothing inherently good or bad about charters...

As I looked around the room, I noticed my educator colleagues taking mental note that Arne clearly hadn't done his homework on the charter school issue--and thus provided an incomplete answer that could impact his overall grade for the lesson. I realized then that I needed to step in with some facts to help scaffold this activity for Arne.

Mr. Hagopian: I [have also] taught in Washington D.C....I taught 10 minutes from the White House--I would drive by the White House, and then I'm in a school with a hole in the ceiling, and it rains into the class.

Our lesson concluded with an informal summative assessment of Arne's analysis of our essential question about "What is a quality education?" Chicago teacher Danielle Ciesielski began the assessment by questioning Arne about his support for scripted lessons in Chicago that eliminated teacher creativity, ended project-based learning and narrowed the curriculum to pre-approved seminars.

Arne: To be clear, we [the Department of Education] want curriculum to be driven by the local level, pushing that. We are by law prohibited from directing curriculum. We don't have a curriculum department.

Mr. Hagopian: I have to interject on that point. Because I think that merit pay...

Mr. Hagopian: ...Directly influences curriculum. When you have teachers scrambling and pitted against each other for a small amount of money [based on how their students perform on a test], what it does is narrow the curriculum to what's on the test, even if you don't set curriculum specifically. So I think you have to address that.

Arne: I will. No one is mandating merit pay.

Mr. Hagopian: But you support it though?

Mr. Hagopian: So you support narrowing the curriculum.

Arne: Can I finish? It's a voluntary program. Schools and districts and unions are working together on some really innovative things.

ARNE'S NON-answer to my direct question was troubling, and I hoped my rhetorical question at the end of this exchange would push him to a deeper understanding of our topic.

While Arne's performance during our lesson was disappointing, none of us educators were surprised, given his chronic absenteeism from the realm of pedagogy. As a spokesperson for Arne recently admitted to the media, his only instructional experience came as a youngster when "his mother ran an after-school program for underprivileged kids in a church basement, and he was both a student there and a tutor."

At the end of our lesson, we had to acknowledge that we failed in our objective to help Arne develop the concept of a quality education, and my belief that all students can succeed was truly tested. Determined not to give up even on the most challenging of students, however, we recommend Arne meet with the following specialists for these targeted interventions:

Parents: Don't let Arne close your child's school. If the federal government can bail out the banks and find the money to bomb children in Afghanistan, then we know there is enough money to build a world-class education system in your neighborhood. Demonstrate and speak out for the funding your school deserves rather than let it be shut down or privatized.

Students: You are not a number generated by a Scantron machine. You are a passionate, creative young person who can change the world. Refuse to be categorized solely by a test score and demand an education that speaks to who you are and what is important to your community.

Teachers: Unions brought us the weekend. They are indispensable, don't let Arne bust your union. Fight to make your union stronger. Replicate the success of the Caucus of Rank-and-File Educators in Chicago--the reform caucus newly elected to run the Chicago Teachers Union--with its vision of social justice education and social movement unionism in unflinching opposition to those who would seek to profit off of the public schools.

With this action plan of parents, students and teachers finding common cause in building their own vision of a quality education apart from that of Corporate America, Arne Duncan may, despite himself, get the education he so desperately needs.